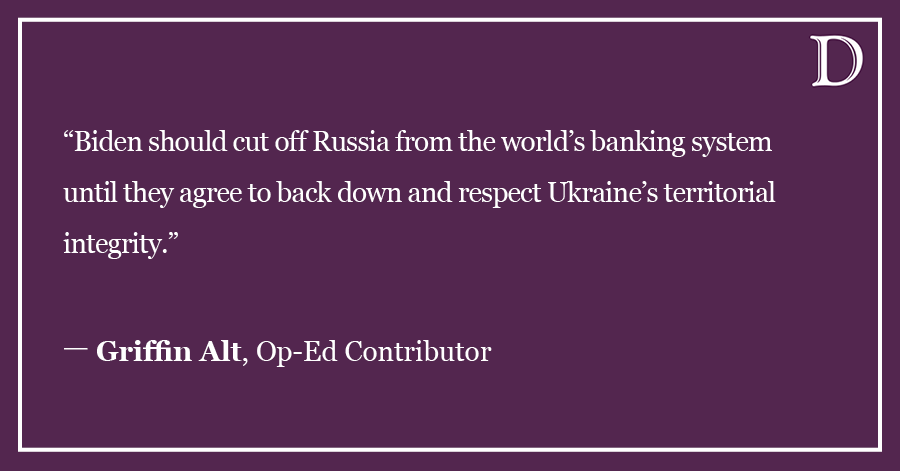 During times of crisis, a perfect solution rarely exists. In the coming days, Russian President Vladimir Putin’s forces are more than likely to sweep into Ukraine. Most Americans, myself included, have grown up in a world in which the United States was the predominant military power. The past year has shattered our perceived sense of invincibility and has left other democratic, freedom-loving nations questioning whether the U.S. will abandon others to tyranny. The U.S. is not unable, but rather unwilling, to defend Ukraine.

President Joe Biden should take immediate action to impose economic restrictions on Russia as a last-ditch effort to prevent a Russian incursion. Direct military confrontation between American and Russian forces should not even be an option, as such action would risk World War III. Instead, Biden should cut off Russia from the world’s banking system until they agree to back down and respect Ukraine’s territorial integrity. Such action can be taken through SWIFT, the Society for Worldwide Interbank Telecommunications.

SWIFT is a Belgian global communications platform that allows financial institutions to communicate with each other about instructions for transferring money and conducting securities trades. If SWIFT were to disconnect Russia, then Russia would struggle to receive foreign currency payments. However, as a result, Russia’s trading partners, which include American allies, would not receive crucial export commodities from Russia. American diplomats would be hoping that with the threat of significant disruption being imminent, Russia would realize that the Russian ruble would become extremely volatile and that Russian oil and natural gas exports to Europe would take a significant hit. Russia would then likely think twice about invading Ukraine and come to the negotiating table, as they would have to determine whether the benefits of taking over Ukraine outweigh the costs of economic sanctions.

Imposing economic sanctions as steep as suspension of Russia’s access to SWIFT is a last-ditch option, but troubling times call for crucial measures to be taken. Any incursion by Russian forces will send shockwaves through global finance markets and a SWIFT suspension could exacerbate such a development. If Biden believes that strong sanctions are necessary, then the SWIFT option is his best course of action. In 2014, then-Russian Minister of Finance Alexei Kudrin predicted that SWIFT sanctions on Russia would cause Russia’s economy to contract by 5%.

Russia’s economic infrastructure may not necessarily be hurt, however. In response to a similar action taken by SWIFT against Iran in 2012 and the proposed use of SWIFT against Russia in 2014 as a result of its annexation of Crimea, Russia has sought to become more financially self-sustainable. The Kremlin could resort to using SPFS, Cross-Border Inter-Bank Payment System, or cryptocurrency. The effect of isolation from SWIFT on Iran was negligible, because Iran’s banking system was already more disconnected than not from the global financial network.

In the end, Putin’s forces are likely going to cross into Ukraine in the coming days, but ordering such action to be taken under the shadow of a threatened SWIFT suspension may cause Putin to think twice. Given the circumstances, utilizing SWIFT appears to be Biden’s best option.

Griffin Alt is a Weinberg freshman. He can be contacted at [email protected]. If you would like to respond publicly to this op-ed, send a Letter to the Editor to [email protected]. The views expressed in this piece do not necessarily reflect the views of all staff members of The Daily Northwestern.