‘It’s an act of violence on our communities’: Advocates push for more equitable construction of electric vehicle charging stations 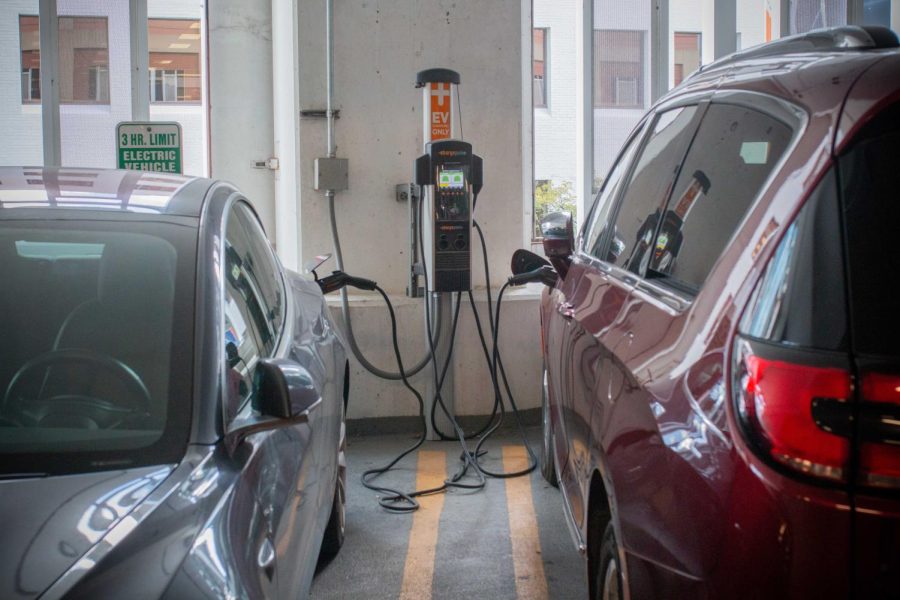 In Little Village, residents inhale toxic air pollution with one of the highest rates of diesel particulate matter in the state. That particulate matter leads to asthma, lung cancer and other respiratory issues at rates much higher than seen in the rest of Chicago, particularly more affluent areas.

Acosta Córdova said both of his parents worked in environmental justice advocacy, including work in Pilsen and Little Village. He said he inherited their passion for fighting environmental racism.

“We as humans all deserve the right to breathe clean air, to not live in toxic soil, to not be exposed to pollution on a daily basis,” Acosta Cordova said. “A lot of times these toxic facilities are placed next to these communities,so it’s an act of violence on our communities.”

Acosta Córdova said that one of the largest barriers to electrifying trucks is the lack of charging infrastructure. Public funding for electric vehicle infrastructure in the Chicago area still lags far behind pioneering states like California, according to data from the U.S. Department of Transportation and the National Conference of State Legislatures.

Horton, who studies public health effects of climate change, green infrastructure and transportation initiatives, said many of the health benefits of switching to electric vehicles can be seen near highways, where reduced tail-pipe emissions have the greatest effect, due to the large quantity of traffic. With more electric cars on highways nearby homes receive less pollution. Horton said electric vehicles improve public health because they emit less carbon dioxide and other air pollutants like nitrogen dioxide.

Benz found in 2020 that Chicago charging stations are disproportionately concentrated in the northern, wealthier neighborhoods. Southern and western parts of Chicago are more likely to be charging deserts, she said.

“The view is stark. It is noticeably not equitable,” Benz said. “(Without incentives, private companies) naturally go to the high wealth markets first.”

LVEJO is urging Little Village’s City Council to invest in electrification and is seeking funding from the state.

Ald. Devon Reid (8th), who serves on Evanston’s Equity and Empowerment Commission, said in Evanston, there is no electric vehicle policy. While nothing is currently in place,  Reid hopes the city creates an equitable electric vehicle charging system.

Most electric vehicle development in the city comes from private companies, according to Cherie Fisher, the co-chair of Evanston’s Environment Board. Fisher said that building proposals offering environmental amenities like charging stations are more likely to be accepted by the city.

Evanston’s City Council unanimously approved the resolution in September 2020, which acknowledged environmental racism historically within the city and the harm people of color experienced as a result.

Joel Levin, the executive director of the national electric vehicle advocacy group Plug in America , started environmental work in carbon offsets. He grew to believe he could have the largest impact with transportation, which comprises 29 percent of all greenhouse gas emissions in the U.S., the largest of any sector .

“Unless you electrify transportation…as long as we’re burning all this petroleum for transportation, you really can’t solve climate change,” Levin said.

Acosta Cordova said that people of color are disproportionately exposed to environmental pollution.

“There’s a lot of negative health implications when you have to breathe so much toxic air, especially for people who live their whole lives (in polluted neighborhoods),” Acosta Cordova said.