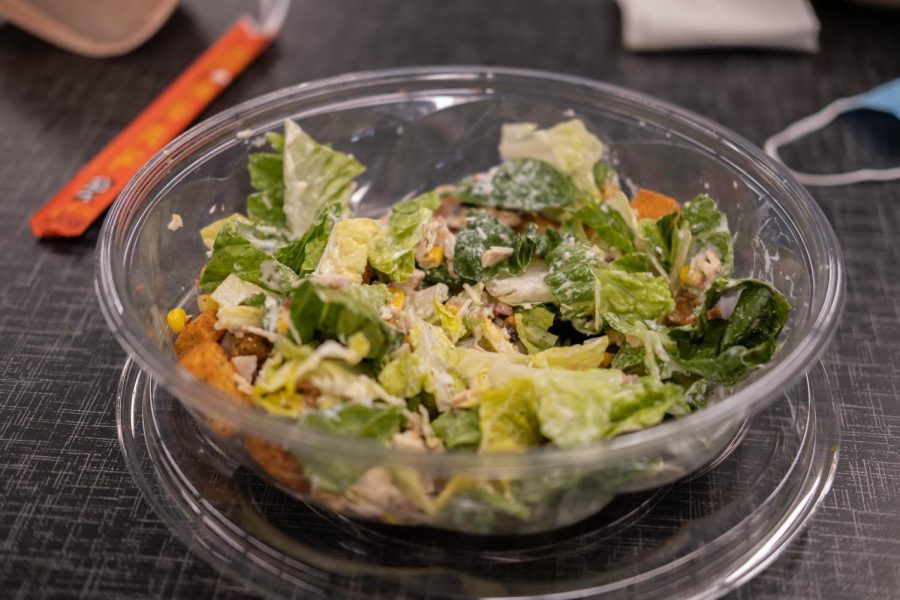 Meal exchanges allow students to utilize credit from their meal plans up to five times a week at select restaurants and vendors on campus. NU Dining previously offered the salad meal exchange at MOD during the 2020-21 academic year, but the policy was reversed in fall 2021.

Brook, who has severe dietary restrictions like nut, dairy and gluten allergies, said she could only use her meal exchanges for Patty Squared’s salads.

“(NU’s) meal exchanges are super limited as of now,” Brook said. “They’re catered toward a specific type of student that can eat everything.”

Brook visited the hospital in December 2021 for an allergic reaction after eating a french fry that was cross-contaminated with pasta. She said this incident prompted her to prioritize her health and reach out to Campus Dietician Lisa Carlson.

In an email to The Daily, Carlson said Compass Group is constantly adjusting its dining program offerings, including meal exchanges.

“We work collaboratively with our chefs, dietitians, operators and marketing team (and campus partners) to make any changes — both big and small,” Carlson wrote in the email. “And when we make a decision, we try to move as quickly as possible and then communicate the changes to students.”

Brook said she told Carlson that Patty Squared salads do not offer protein and that dining hall salads are often cross-contaminated. Just a week after Brook first contacted Carlson, NU Dining announced that MOD salads would qualify for meal exchanges.

“This really showed me that they do care about their students and what they’re pushing for,” Brook said.

While Brook said the salad meal exchange is a step in the right direction, she and other students say the University should provide more options for students with dietary restrictions or allergies.

Before NU Dining reinstated the MOD salad meal exchange, SESP sophomore Samantha Olson, who has celiac disease and adheres to a gluten-free diet, said she was also only able to use meal exchanges at Patty Squared. Even with MOD’s gluten-free pizza crust, Olson and Brook said there is still a chance of cross-contamination since workers do not always change their gloves between making pizzas.

“My parents eat gluten free, too, so everything in our house is gluten free,” Olson said. “Getting here and being so limited was a shock.”

McCormick sophomore Elizabeth Campisi, who also adheres to a gluten-free diet, said the tongs used to serve salads at MOD help reduce cross-contamination for those with celiac disease. Campisi said cross-contamination is one of the biggest challenges that comes with having celiac disease and that she often has to take additional precautions while navigating dining at NU.

“A lot of times it’s asking additional questions like, ‘Hey, do you mind changing your glove?’ or ‘Are you sure this is okay?’” Campisi said. “If I don’t really love the thing that’s at Pure Eats that day, I guess I’m not eating or have to figure out something on my own.”

Going forward, Campisi said she would appreciate the University offering a greater variety of meal exchanges with gluten-free options, such as rice bowls at Viet Nom Nom.

“It’s difficult because you always have to ask and be super vigilant,” Brook said. “I wish I could have more options that I know don’t have cross-contamination and make me feel safe.”