‘We want to be able to revel in each other’s euphoria’: Han Training offers accessible, trans-inclusive gym space 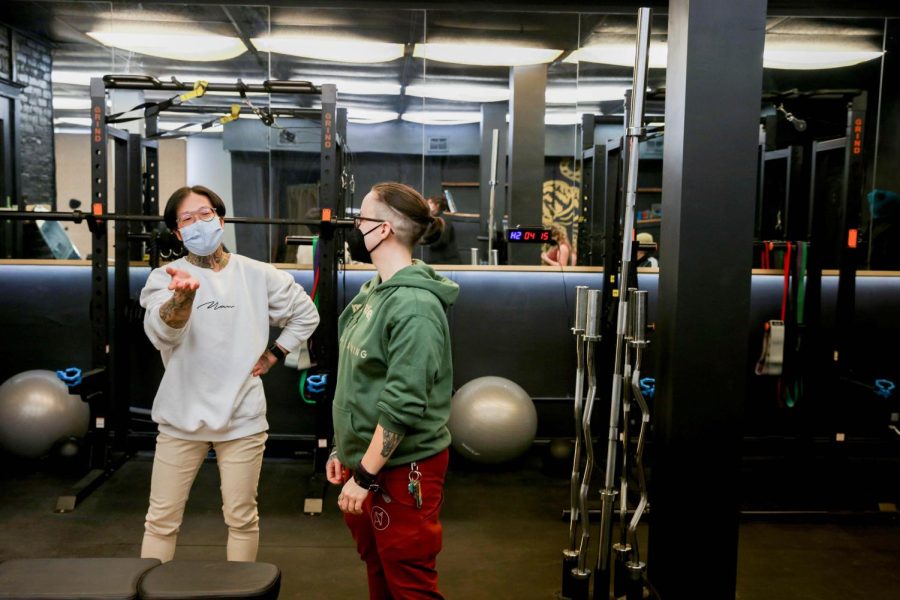 Minky Kim, left, at Han Training. The gym, which opened in North Chicago in January, centers queer and trans people.

On Jan. 31, one of Minky Kim’s clients returned to Han Training for the first time since getting top surgery. They celebrated in a room full of trans people with similar experiences.

To Kim, moments like that are emblematic of the gym’s mission.

Han Training, a new trans-owned gym in Chicago centered around queer and trans folk, is Kim’s brainchild. Kim started doing personal training out of their residence. Demand for their services snowballed, and they had to start a waitlist. The gym steamrolled from there, Kim said.

Kim opened the gym in January on Chicago’s North Side. Kim said they are about to quit their current job as a veterinary technician to work at Han full-time.

Many gyms claim to welcome everyone while doing little to make that a reality, Kim said. Han, by contrast, is focused on accessibility — both physically and financially.

Kim makes sure to space out machinery so the gym is easy to navigate. They said they don’t turn away anyone for lack of funds, and they’re also starting a program to provide six months of free training to one queer or trans person of color at a time.

Though Andie Meadows, Kim’s fiancee, said she isn’t a conventional gym person, she loves the space she and Kim built. She sees Han Training as a physical manifestation of Kim’s identities as a trans, Korean person.

“I am a fat femme person. I am loudly not a gym person,” Meadows said. Han provides her a place “to be in this body and make a gym space that I would want to use, and that people walk into and are excited about using,” she added.

Kim wants the gym to be a place for marginalized people to feel safe.

When Kim first started working as a personal trainer, they called their practice LiftyBoi Training. However, after the 2021 Atlanta spa shootings in which eight people died, including six Asian women, Kim decided to make the name more serious.

“Han is a Korean concept of this feeling of grief and rage and anguish that comes from intergenerational trauma from oppression,” Kim said. “Specific to the Korean identity, but I do feel like that is a feeling that all of us that are marginalized feel regularly.”

Sam Kochanek, the gym’s administrative assistant, found community at Han in a way they didn’t see at other gyms. Han, they said, is full of people who want to feel good in their bodies and see others feel the same way.

As a personal trainer-in-training, Kochanek said Han Training was the first place they saw another trans trainer. They described Kim as a role model who worked to create an inclusive, comfortable environment at Han.

“You get to take the selfies in the mirror,” Kochanek said. “We hype each other up and stuff like that. So it’s just a good energy all around to be in that space.”

Chicago resident Casey May said they started working out with Kim in April 2021. They said they were attracted to the gym because Kim specifically said they worked with people with disabilities, and May liked the idea of a space built by and for queer people.

May said they found a “magical space” at Han, in addition to the exercise they were looking for.

“I’ve met some of my best friends through Han Training,” May said. “We’ve all been craving community. And this has been such an amazing way to feel that kind of community buzz.”

Han Training holds events geared toward the trans community, like a clothing swap May said they attended. People brought clothes to give away and chose new outfits that others brought. May said that was especially important for many trans and nonbinary people who are experimenting with gender expression.

Kim said they’re going to start topless workout sessions where transmasculine people can choose to show off their chests. They hope to help people grow confident in their bodies and learn to move with intentionality.

“I just want people to really just feel hot and invincible and strong,” Kim said. “I like to think that folks do walk away feeling that way, because they keep coming back.”