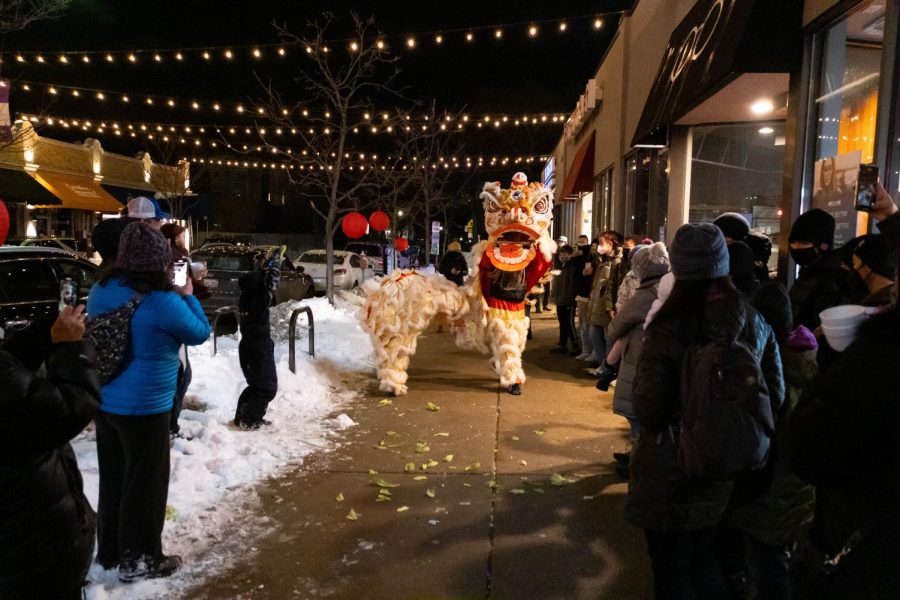 Main-Dempster Mile hosted a Lunar New Year celebration for the Year of the Tiger. Community organizations coordinated festive food and activities that brought residents together.

More than 70 guests of the Main-Dempster Mile’s Lunar New Year Celebration watched as a white, gold and red lion danced down the red lantern-decorated sidewalk last night near the intersection of Dempster Street and Chicago Avenue.

The event was a collaboration between the Main-Dempster Mile, Evanston Pride, Kids Create Change and Melissa Raman Molitor, an Evanston artist, educator and art therapist who works to increase visibility and representation of the Evanston’s Asian, South Asian and Pacific Islander community.

Molitor said the event was important to cultivate a sense of belonging for Asians and Asian Americans in Evanston.

“Evanston does not have a history of supporting the visibility and representation of the Asian community,” Molitor said. “It’s really important … for us to feel like we belong to the community.”

Molitor said community-building events like this celebration are also an important opportunity for all Evanston residents to learn about a new culture and set of customs.

Katherine Gotsick, executive director of the Main-Dempster Mile, passed out informational postcards explaining traditional Mandarin New Year’s phrases and traditions such as the red envelope tradition, where parents and grandparents give their children red envelopes filled with money.

Molitor said the postcard was helpful to raise awareness and education around the holiday and its customs.

Chicago resident Kam Cho formed the group with six of his friends in college. Cho, who has danced since grammar school, said it is important to learn about other cultures.

“It’s always great to have a diverse culture,” he said, “just to share that knowledge.”

Northwestern graduate student Graham Pritchard and his fiancee, Qing Mao, stumbled upon the celebration. Pritchard said he was not expecting something to be happening on Main Street, but it was nice to see lanterns and red envelopes hanging from the trees, along with the lion dance.

Mao said it is important to have diversity and representation, adding there are students in Evanston from around the world. Originally from China, Mao appreciated how the scene felt familiar to her.

“It is really nice,” she said. “It just feels like home.”

— Chinese international students share the stories behind their names, advocate for more inclusion on campus