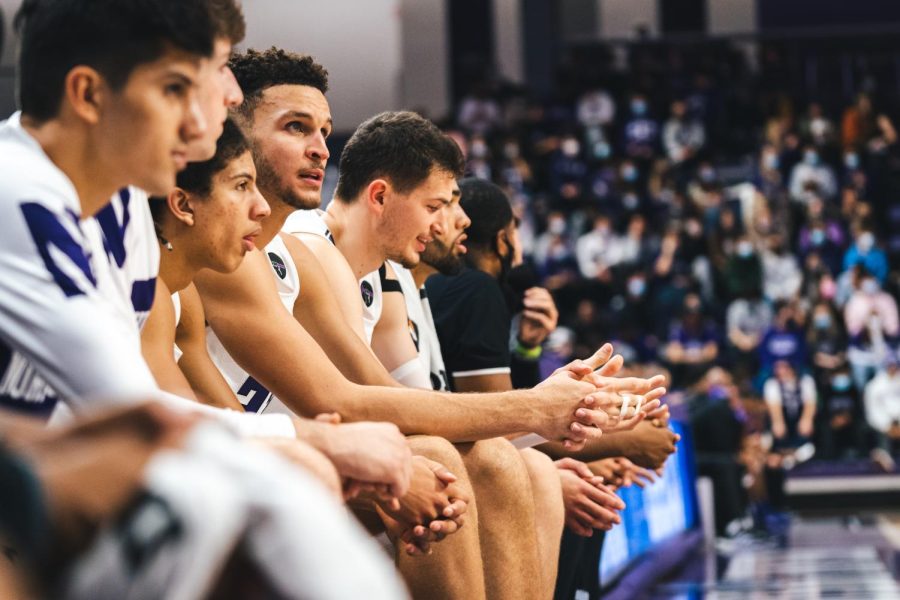 Northwestern players watch the game from the bench. The team couldn’t secure the victory Wednesday against Michigan, dropping the contest 72-70.

Excluding its 20-point loss to Purdue on Sunday, Northwestern’s last six contests in men’s basketball have been decided by 29 points total.

However, the team won only one of those meetings.

After a neck-and-neck first half, the Wolverines stretched their three-point halftime lead to 11 within the second period’s first three minutes. Despite this, NU fought back, and in a big way: a 25-7 run in a seven-point lead with five minutes remaining.

From there, though, the Cats’ offense went silent, whereas Michigan’s began to roar. The Maize and Blue turned the rock over a single time and missed zero shots from the field during the last five minutes. On the other side of the coin, NU made only one field goal crunch time: a deep three by junior guard Boo Buie, with 50 seconds remaining.

To make matters worse, the group faced a squad down Hunter Dickinson, the Wolverines’ leading scorer this season, and Moussa Diabate, who scored seven straight points with five minutes left, as both fouled out on back-to-back NU possessions around the two-minute mark.

Adding on to the shooting woes, the Cats — the seventh best free throw shooting team in the Big Ten — went three-for-eight from the line with less than five minutes remaining. This included consecutive misses by senior forward Pete Nance with nine seconds left and a three-point game.

Luckily for them, Michigan’s Jordan Faulds mirrored Nance’s free throw attempts, missing both as well. But in turn, the Wolverines sent Buie to the line. They limited him to two potential points outside of a long shot possibility of converting the first free throw, missing the second, grabbing the rebound and trying to score. They accomplished all of those things, except for the most important part: scoring.

NU has faced similar missed opportunities at the charity stripe in past contests, especially recently. Throughout the last 10 minutes of the game against Wisconsin, redshirt junior Ryan Young made one of five free throws, the team collectively shooting one for six — a key point of emphasis in a game measured by only six points.

Including their matchup against the Wolverines, NU has won the free throw battle by percentage only twice in the past eight games — a deciding factor that could’ve changed the outcome of each game.

NU’s kryptonite hasn’t just been late-game free throws opportunities, but also closing out games dating back to last season. During the 2020-21 campaign, 13 of the Wildcats 24 contests were decided by 10 or less points. Currently, NU is at 10, winning two of those matchups, with more than half of their conference schedule remaining.

No matter the designated home or away team, securing a victory in arguably the toughest conference in college basketball is anything but an easy task. With many more contests on NU’s 2021-22 slate, and much more time to flip the script, the group will need to play its best brand of basketball night in and night out.