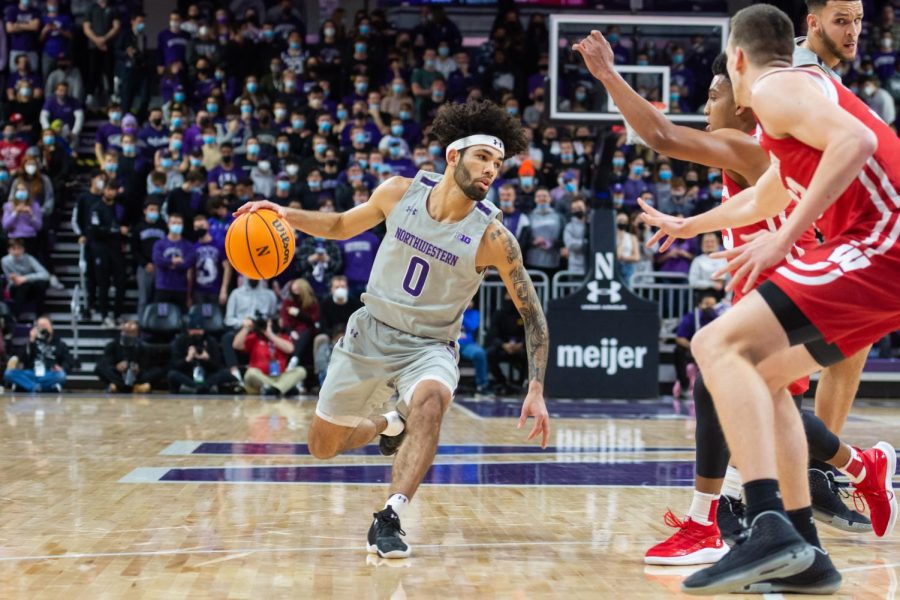 Boo Buie prepares to make a move after coming off a screen. Buie’s late game efforts, including 11 second-half points, weren’t enough as Northwestern fell to Michigan 72-70.

Northwestern’s inability to close out games once again stymied any momentum or progress shown on Wednesday.

The Wildcats’ 72-70 defeat to Michigan gives it six Big Ten losses by eight or fewer points. NU (9-9, 2-7 Big Ten) was in a back-and-forth battle for much of the first half. The Wolverines (10-7, 4-3 Big Ten) held a slim three-point lead at the intermission, due in large part to the efforts of the Cats’ frontcourt.

Coming out of halftime, however, the Cats nearly played themselves out of the game. A nine-point spurt from Michigan guard Eli Brooks gave the Wolverines’ bench and student section a boost, as Juwan Howard’s squad held a double-digit lead early in the second half.

But NU didn’t fold. A flurry of buckets and several trips to the free throw line engineered a 25-7 run spanning more than 10 minutes in the second period. Senior guard Ryan Greer buried a 3-pointer as the shot clock struck zero, giving the Cats a 56-55 advantage, their first lead since midway through the first half.

Tack on a pair of free throws from Nance, a layup from junior guard Boo Buie (who scored 11 of his 13 points in the second half), and another layup from Beran, and NU was firmly in control of a seven-point lead.

It was all for naught, though, as the Wolverines clawed back into the game and retook the lead thanks to shooting from both the charity stripe and beyond the arc. Terrance Williams II’s triple at the 2:08 mark in the half — one of the team’s eight made 3-pointers — gave Michigan a lead they wouldn’t relinquish.

Despite Michigan’s late-game run, the Cats were still in position to win the game, but a series of unfortunate events occurred in the final 17 seconds of regulation. Following a Young missed free throw, it was Nance who tipped the ball to Buie and secured an extra possession with NU down three with 12 seconds to play. The play that proceeded never materialized in the fashion coach Chris Collins likely wanted. Nance caught the ball in the left corner, with NU looking for Buie to come off a Young screen for a catch-and-shoot 3-pointer.

But as the old adage goes, you always foul up three late, and that’s what Michigan did.

Williams fouled Nance before the pass and the Ohio native uncharacteristically missed both free throws. The Cats’ fortunes seemed bleak following the misses. Nevertheless, Wolverines’ Jaron Faulds blessed NU with one last chance before the buzzer. In an effort to get up court quickly, Buie was fouled. He made the first free throw, yet missed the second, with Nance collecting the rebound and finding first-year Julian Roper II on the wing.

It would have been perfect: Roper, a Detroit native with family in attendance, with the ball in his hands in the scenario every player imagines. His attempt, however, fell short.

The adversity of the season continues to increase for the Cats, compounded by their struggle to close out games. But with three of their next four games in Evanston, there may be hope that NU can gather some much-needed momentum.