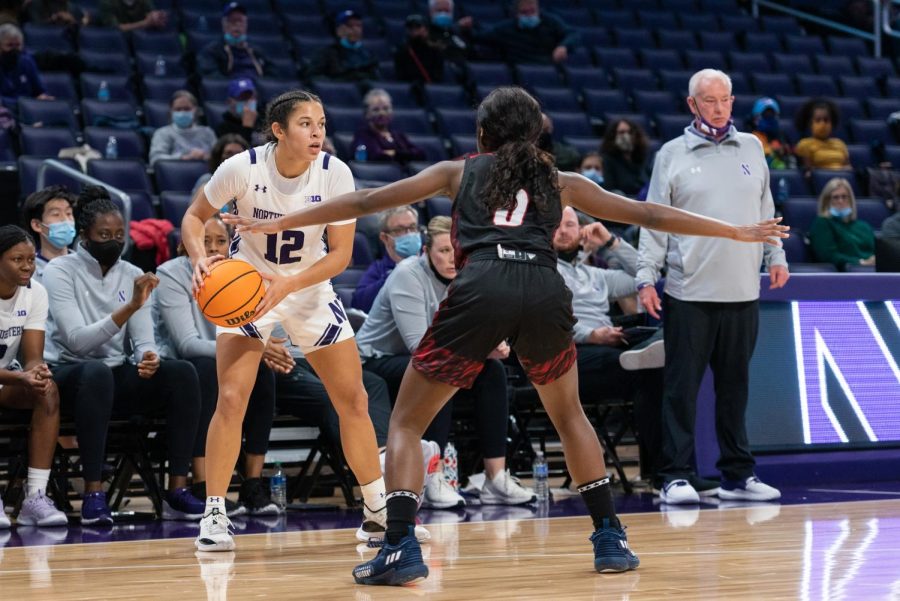 After dropping their last two Big Ten contests, Northwestern traveled to College Park, Md. to take on No. 12 Maryland on Sunday – the first ranked opponent the squad has faced this season.

The Wildcats (11-7, 3-4 Big Ten) could not close out the upset and fell 87-59 to the No. 12 Terrapins (13-6, 5-3) after struggling to match Maryland’s explosive performance beyond the arc. NU’s now-three-game losing streak puts them tied for eighth place in the Big Ten.

Senior guard Veronica Burton scored the first points of the game with a clean layup, but multiple Cats beyond Burton had early scoring successes as well. Four NU players tallied points in the first quarter: Burton got it done in the paint and inside the arc, a classic board from senior guard Courtney Shaw gave her an easy layup, and junior guard Laya Hartman and graduate guard Lauryn Satterwhite’s finesse from three continued.

But after Burton’s opening points, the Terrapin’s success behind the arc (and otherwise) put them on top for the rest of the first quarter. Maryland went 4-for-7 from three and 7-for-11 from the field in those first 10 minutes, and finished the quarter with a 18-14 lead.

The Cats’ aggressive defense fizzled in the second quarter — NU forced six turnovers in the first and only one in the second. Sophomore forward Anna Morris stepped up and found her first basket since Dec. 5, giving the Cats their first points in nearly five minutes. Morris accounted for four of NU’s nine second quarter points.

The Cats struggled to keep pace with the Terrapins and were outscored 21-9 in the second quarter. NU entered halftime down 39-23, their largest halftime deficit of the season.

The third quarter proved to be an uphill climb for the Cats. NU was able to keep itself even with Maryland for the first half of the quarter. Freshman guard Jillian Brown scored for the first time. But the squad could not match their opponent’s continued success behind the arc. The Terps went 6-for-6 from three with the help of four separate players, and ultimately outscored the Cats 28-16 in the third quarter.

NU entered the final quarter down 67-39 looking to make up any ground they had lost. The squad continued to fight, finding multiple offensive boards and points off of those rebounds. Freshman guard Hailey Weaver found playing time for the first time since Dec. 11 against Delaware and notched her own three-pointer.

But Maryland shot 58.1% from three and 48.4% from the field and closed out the game with five double-digit scorers, ultimately earning their 87-59 victory.

In their last game, coach Joe McKeown changed the starting lineup for the first time since Dec. 17 by swapping Hartman for freshman forward Caileigh Walsh. Sunday’s contest presented more changes — Walsh did not dress for the game, and typical starter Melannie Daley began the matchup from the bench while Satterwhite found her first start since Dec. 2. A shakeup in the starting lineup may be just what NU needs to perk up their season, but Walsh’s presence was missed on Sunday. The freshman averages 10 points and leads the Big Ten with 1.9 blocks per game.

NU struggles to come back from second quarter struggles

Northwestern’s first quarter showed bright possibilities for the rest of the game. They closed out the quarter down only 18-14 with scoring spread between four separate players and forced three more turnovers than they gave up. But the second quarter proved a different story on all fronts as the Cats struggled to hold back the Terps. A 16 point halftime deficit turned into a 28-point deficit with 10 minutes to go. NU needs to focus on finding fast breaks, generating momentum, and keeping pace with their opponents before a tough matchup later this week.

NU’s most notable win of the year came against Caitlin Clark and the Hawkeyes in Iowa City — the Cats found a 77-69 victory on Jan. 6. After dropping three of their four contests since that win, the NU defense will need to find their groove again to contain Clark, the top scorer in the country with 26.2 points per game.