Men’s Basketball: Northwestern gets Boo Buie’s ups, downs distilled into 40 minutes in loss to No. 4 Purdue 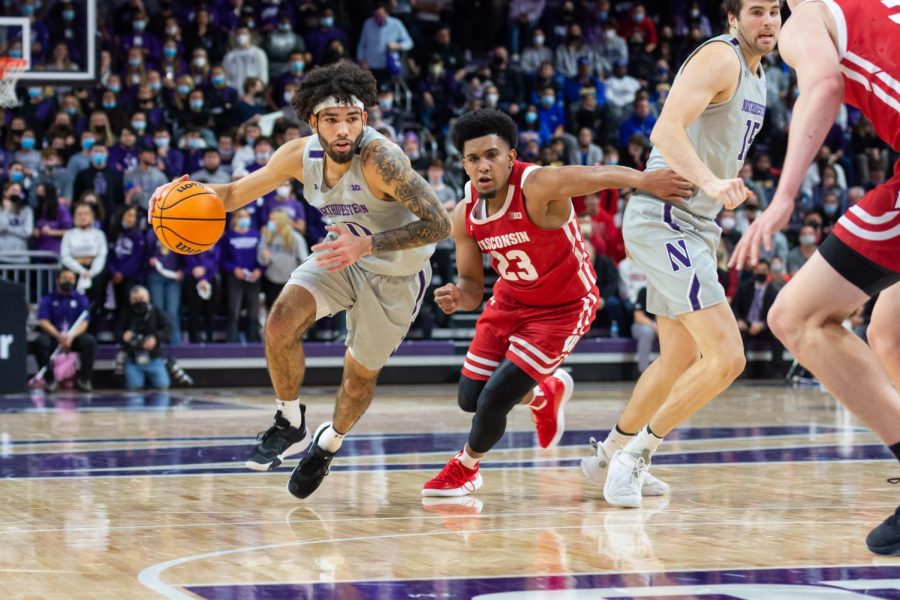 Boo Buie drives to the basket. Buie’s hot and cold streaks played a big role in Northwestern’s loss to No. 4 Purdue Sunday.

In these six words lie a summation of junior guard Boo Buie’s star-crossed, entertaining Northwestern career. The Wildcats’ 80-60 loss to No. 4 Purdue Sunday afternoon featured every version of Buie, as NU rode his play to successes and missteps alike against the Boilermakers.

“Every time we got (back in the game),” coach Chris Collins said, “we kind of shot ourselves in the foot.”

The Cats started off on the wrong foot, falling behind in the game’s opening stages. Purdue center Zach Edey responded to freshman guard Julian Roper II’s early layup with a jumper to tie the game 2-2, and NU led just twice after that.

Meanwhile, Buie struggled early. When Roper II stole the ball from Edey 52 seconds into the contest, Buie couldn’t connect on a three-point attempt. After senior forward Pete Nance rebounded an Edey miss with 9:36 left in the first, Buie missed another three. Nance turned the ball over a little over a minute later, and Buie finally broke into the points column with two free throws after Boilermakers guard Isaiah Thompson fouled him with 4:50 left in the half.

“We took some bad shots,” Collins said. “Part of that is their defense, but I thought we took some … rushed shots.”

The Boilermakers appeared to have the game won when forward Mason Gillis’s layup gave them a 64-47 advantage with 8:03 showing on the clock, but Buie promptly went to work. He splashed a three-pointer with 7:45 to play, another 38 seconds later, and then another 33 seconds after that. Purdue had no answer during that span, as Gillis missed a three and Roper II stripped guard Eric Hunter Jr.

Here, it seemed, was the Cats’ golden opportunity, with the Boilermakers’ lead down to 64-56 with 6:34 to play. Purdue flexed its offensive muscles, though, stunning NU with a 16-4 run to close the game out.

The Cats’ only points during this span came via a Beran layup with 5:22 left and sophomore center Matthew Nicholson’s slam dunk in the final two minutes. Buie shot twice after his 9-0 barrage, but missed both a driving layup with 5:58 left and a three shortly thereafter.

Buie’s final numbers: 5-for-11 from the field, 5-for-8 from three, four rebounds, three assists and three turnovers. He was NU’s only player in double figures, scoring 12 of his 17 points as the Cats made their second-half push.

The Boilermakers’ tough defense, however, extinguished NU’s spark plug and sealed a crucial home win on the heels of their loss to Indiana.

“We gave ourselves a chance there midway through the second half,” Collins said. “Then Purdue did some great things to win the game.

— Men’s Basketball: Northwestern falls short in 82-76 loss to No. 8 Wisconsin