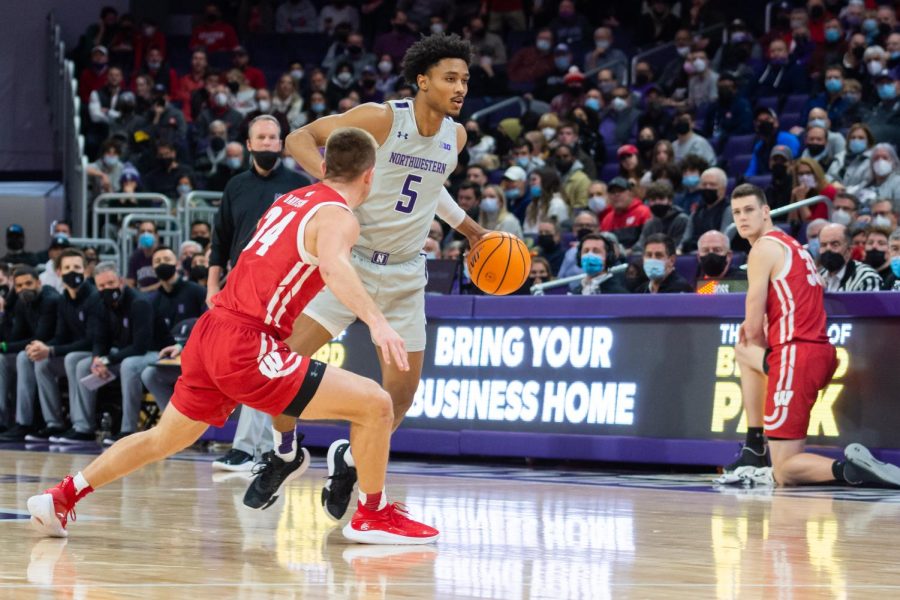 Julian Roper II prepares to make a move on a defender. The freshman got his first start of the season in the 80-60 loss against No. 4 Purdue.

The Boilermakers’ Jaden Ivey would be inactive for the contest due to a hip flexor injury, leaving Purdue without their leading scorer. Unable to capitalize on the opportunity, however, NU (9-8, 2-6 Big Ten) struggled to stop Purdue’s (16-3, 5-3 Big Ten) offense in its tracks, losing 80-60.

The regional foes battled back and forth early in the game for control, with the Boilermakers grabbing a seven-point lead around the 10-minute mark in the first half. However, the home team did maintain control in one category throughout the 40 minutes — rebounding.

The Cats combined for a total of 21 rebounds on the day, their lowest rebound total of their 2021-22 campaign. On the opposite end, Purdue’s center Zach Edey — listed at 7-foot-4-inch — and Trevion Williams snagged 10 boards each, a major part of the team’s 33. NU junior guard Boo Buie, freshman guard Julian Roper II (who replaced sophomore guard Ty Berry in the starting lineup) and redshirt junior forward Ryan Young finished in a three-way tie with four boards apiece.

Not only did this provide the Boilermakers with more opportunities to find the basket, but it also stifled the Cats’ offense. NU entered the intermission shooting 25% from deep, with eight points in the paint and three offensive rebounds. The offensive glass is an area they’ve thrived in recently, with 10 or more offensive rebounds in the last four games heading into West Lafayette.

“Coming into the game you kind of feel like if you can hold their two big guys to 24 combined you should have a chance,” Collins said. “But they were still able to get to 80 points because of what the other guys did.”

The Wildcats found their rhythm coming out of the break, going on a 7-0 run that was capped off by a left-wing three by Buie that cut Purdue’s lead to five. The teams exchanged points for the following minutes, until Purdue once again caught fire, stretching its lead to a high of 18.

Once again, NU and Buie punched back, as the guard went on a 9-0 run with three consecutive threes. However, with senior forward Pete Nance picking up his fourth foul nearly halfway through the second and redshirt junior guard Chase Audige never finding his groove after early first half foul trouble, Buie was the lone Wildcat with more than 10 points.

“(Purdue’s) so physical that there’s going to be some fouls and you try to do your best to limit those things,” Collins said. “Especially to start the second half, Pete got three quick ones there. He had to sit a considerable amount of time and kind of lost some of his rhythm.”

By the time the guard’s shooting run faded, Purdue edged closer to the 70-point mark. Purdue is undefeated when scoring 70 or more points all the season. From there, NU couldn’t put together a run to break their streak, dropping its second straight affair.

Although suffering its largest loss of the season, the team has finally made it through the toughest part of the schedule, with five out of seven opponents ranked in the top 25, with four in the top 10. No team left on NU’s schedule is currently ranked. With 12 games left in the regular season to compete and turn things around, Collins felt his team battled through adversity all game.

“We fought really hard,” Collins said. “Every time they tried to get away from us we made a push.”