Women’s Tennis: Northwestern prepares for first dual match of season on the road at Vanderbilt 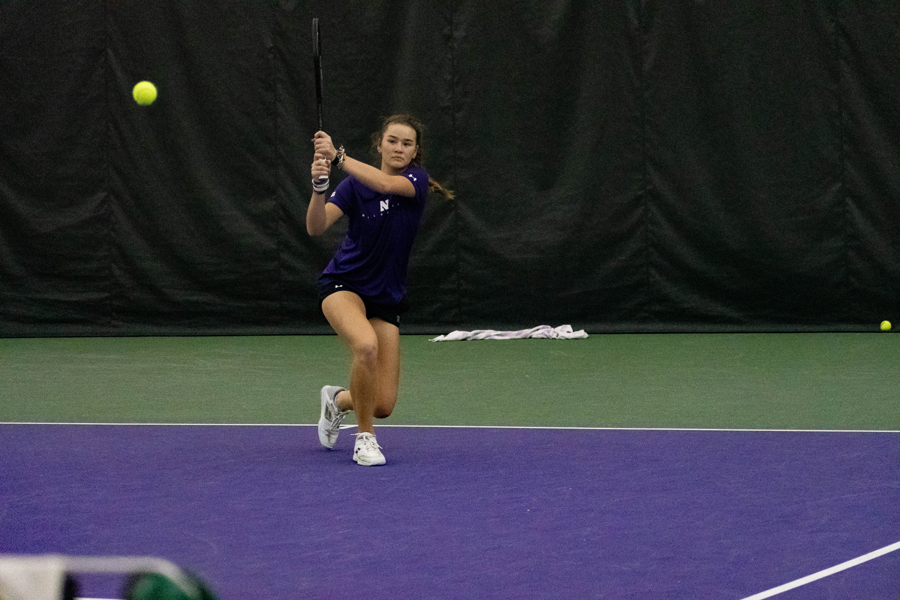 Clarissa Hand hits the ball. Northwestern is preparing to face Vanderbilt on the road in their first dual match of the season.

Following convincing performances against Wisconsin and Butler in the Wildcat Invite, Northwestern is preparing for their first dual match of the season against Vanderbilt on Sunday.

The Wildcats were 18-2 in doubles matches against the Badgers and Bulldogs while also posting a 16-7 record in singles. Senior Clarissa Hand was 2-0 in singles matches, defeating Butler’s Natalie Boesing and Wisconsin’s Ava Markham, respectively. She also won three of four doubles matches in the event, playing with several different NU players.

“We have a weekend in our back pockets now, and it laid a good foundation,” Hand said of the three-day event. “It’s good that we can build off this weekend.”

Hand enters the dual match against the Commodores as the lone ranked Cats player in the latest ITA singles poll, currently sitting at 94th. The duo of juniors Briana Crowley and Christina Hand sit 58th in the doubles rankings. Vanderbilt boasts three singles players in the Top 125 in Marcella Cruz, Anessa Lee and Holly Staff. The pairings of Cruz and Staff as well as Lee and Staff also rank in the Top 60 in doubles.

The Commodores competed in the Miami, Fla. Spring Invite last weekend, going 11-10 in singles matches and 3-3 in doubles against Miami, Texas and North Carolina State.

While Vanderbilt and NU’s records in their invites may have differed, their roster makeup is quite similar. The Cats return six players and add five to the roster, while the Commodores bring back five and add four. Regardless of roster outlook, the weekend afforded NU the opportunity to begin establishing a team identity.

“Having a weekend where we were in a dual match type situation, that helps a lot instead of just playing a singles tournament,” Hand said. “It really established what we’re like as a team and how we like to do things.”

The trip to Nashville, Tenn. is the first of several road matches for the Cats over the next few weeks. After facing Vanderbilt, NU will head to Raleigh, N.C. for ITA Indoor Qualifying, followed by a trek down to Atlanta, Ga. to face Georgia Tech. The Cats will then venture back to the Midwest for the ITA National Team Indoors in Madison, Wis. in mid-February.

While future travel prospects may not be an immediate concern, the success in the Wildcat Invite has set the tone in the early stages of the season.

“We have great energy,” Crowley said. “We’re all really excited to play for something that’s much bigger than ourselves. We all want to play for each other, for the team, for the coaches and for the school most importantly. So that’s what makes this team really special this year.”