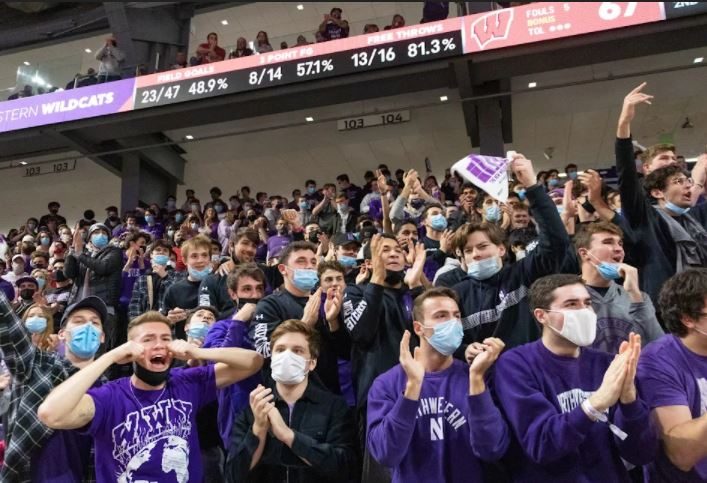 Northwestern’s student section against Wisconsin. Northwestern Wildside sent a letter to the Big Ten on Jan. 4 asking Big Ten Plus to be made free for all students.

For the first two weeks of Winter Quarter, students not only participated in Wildcat Wellness and remote learning, but they also saw limitations to other spaces around campus. This included the Norris Center, Henry Crown Sports Pavilion and Welsh-Ryan Arena, as no fans were allowed entry into the sports venue.

A similar mandate was enforced last year due to the COVID-19 pandemic, making students’ free Big Ten Plus memberships especially useful. However, a network provider switch meant the gift was not given this year.

Disagreeing with the Big Ten’s decision, Northwestern Wildside, the student-run organization spearheading the student section for Northwestern Athletics, took matters into their own hands.

“We wrote a letter and co-signed it and sent it to the Big Ten,” Weinberg senior Jacob Brown said.  “I just brought it up, and everyone sort of seemed to be integrated so that it’d be worth at least asking.”

Like Wildside for the Cats, each in-conference school has their own organized student section, such as the Orange Krush for Illinois and The NutHouse for Ohio State.  As Wildside’s president, Brown said that the student sections have a Twitter group chat together, excluding Indiana. Additionally, Brown added that after noticing each university would be virtual, the lightbulb lit up in his head.

In the letter, the group addressed the Big Ten Network Executive Team on Jan. 4.

“We are writing today, on behalf of the student sections of the Big Ten, to request that Big Ten Plus again be made free to those on campus,” the letter read.

Two weeks later on Jan. 18, the group received an answer, and their wish was granted.

“We really pride ourselves in being enthusiastic about every different sport, and those sports are really only accessed through Big Ten Plus,” McCormick junior Marco Contreas said.  “The ones that are particularly interested in sports, or even the ones who were just interested in showing school pride, they really want to show it in any way possible.”

According to Wildside’s social media, there are five steps to receiving the exclusive coupon code that last until the end of the school year.

Contreas, Wildside’s marketing chair, said he appreciated the conference’s decision and their willingness to listen to the student body. He said he believes the letter directly led to the students getting the service for free once again.

“They realized that it’s the least they could do is give us access to our respective schools so that we can make sure that no matter what happens we can have a full experience and fully support our team,” Contreas said. “It gives people easier access.”

After concluding that the student section during the men’s basketball game on Tuesday versus Wisconsin was the strongest during his four years in Evanston, Brown said he is not only excited for the future student sections, but also for the growing number of people using Big Ten Plus.

Brown expressed that they have been seeing this trend at NU, while Contreas added that it functions as an awakening for some of these teams, especially for those sports not televised.

“It’s just a good way, one, for people to have access to games, but also a good stepping stone and turning people into fans,” Brown said.