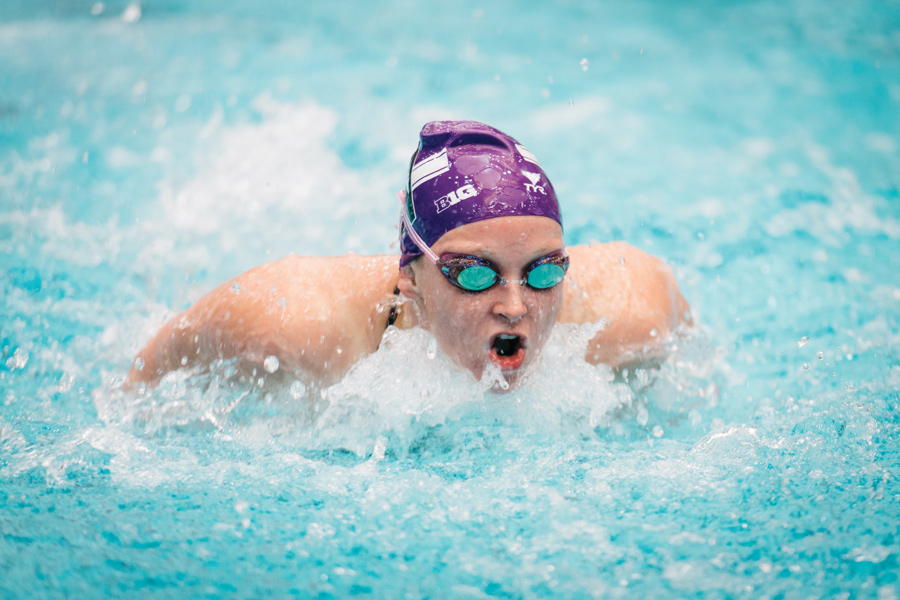 A Northwestern swimmer does a lap in the pool. The Wildcats are off to a strong start this season, building upon last year’s success.

Things are only looking up for Northwestern swimming and diving.

Last season, in coach Katie Robinson’s first year as head coach, both the women and the men’s teams set program records with the points they scored at Big Ten Championships, finishing fourth and sixth, respectively. At the National Collegiate Athletic Association Championships, the women experienced their greatest success in two decades with a 16th place finish, and three swimmers on the men’s side qualified as well. To round out the team’s accomplishments, divers Jaye Patrick and Leah Parsons achieved top-25 finishes at NCAAs.

NU is building off this momentum from last winter with a roster stronger than ever before. The men were ranked 24th in the preseason poll, one of their highest rankings in recent history, and the women ranked 16th.

The team, which has not graduated any members of last season’s NCAA team and features Olympic talent in 2021 Tokyo bronze medalist Federico Burdisso, holds lots of promise.

“There’s really only room to improve,” said graduate student and All-American Maddie Smith, who currently holds the 12th top time in the 100 freestyle in the NCAA.

“It’s been a very positive and successful year so far,” Robinson said. “But we’ve got a lot more to prove and a few more meets coming up to show some even stronger results.”

At the Purdue Invitational this fall, the team of Manuel Martos Barcarios, Kevin Houseman, Federico Burdisso and Andrew Zhang set a new school record by swimming the 200-yard medley relay in 1:24.68. This blazing time beat the previous record set in 2007 by a team that included Olympians and World Champions, one of the best in the NCAA at that time.

“The fact that we were breaking times that were at the top back then is a really good step for our program,” Robinson said.

This weekend, NU welcomes Big Ten rival Wisconsin to Evanston for their last home meet of the season, where the team will honor their seniors.

Last season, the women beat Wisconsin by over a hundred points, while the men lost a close battle against the Badgers by only 13 points. In the NCAA preseason poll, Wisconsin was close to the Cats, with the women ranked 19th and the men 18th.

It’s shaping up to be quite a duel in the pool Saturday at Norris Aquatics Center, as the women look to keep their winning streak alive and the men seek redemption.

“We’ve gotten really competitive and it’s gotten really feisty between us,” said junior Kevin Houseman, who currently holds the fifth fastest time in the NCAA in the 100-yard breaststroke and was recently named as a member of the US National team. “There’s a bunch of banter with them. It’s a completely different dual meet against Wisco, there’s a big desire to win.”

The Cats will also rely on their breaststroke trio of Tara Vok, Hannah Brunzell and Sophie Angus who swept the podium at the Purdue Invitational and all hold top-20 times in 100 breaststroke so far this season.

Having found themselves in the bottom half of the conference for most of the past decade, the NU men are now emerging as a consistent competitor. Teetering around the top 25 rankings this season, senior Connor LaMastra says the men are looking to “make a significant impact this year and trying to break into the top 20 national teams.”

Both the men’s and the women’s teams hope to send at least 10 swimmers to the NCAA Championships. Qualification can be automatically achieved through NCAA “A” Cuts or through “B” cuts, where swimmers are invited to compete if there are additional spots open.

On the brink of what could be a history-making season, LaMastra describes the culture the team is trying to cultivate around success.

— Captured: Swimming and Diving makes a splash during fall competitions