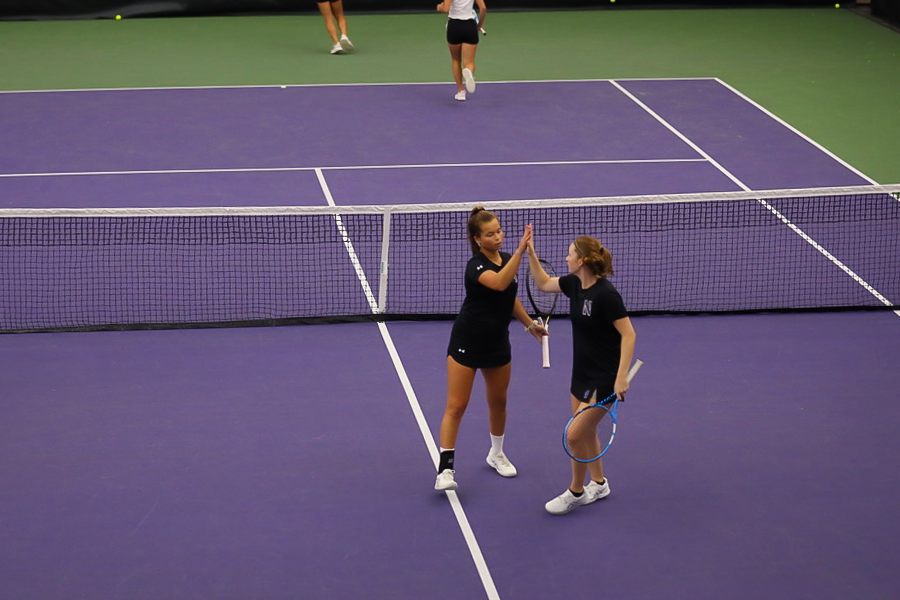 Two Northwestern players high-five after a point. NU kicked off the 2022 spring campaign with a dominant performance against Wisconsin and Butler in the Wildcat Invite.

Northwestern kicked off the 2022 campaign with a string of strong performances against Wisconsin and Butler in last weekend’s Wildcat Invite.

The Wildcats were dominant in doubles matches against the Badgers and Bulldogs, posting an unblemished 15-0 record on the first two days. In a shortened Monday slate, NU went 3-2, falling both times to Wisconsin.

Still, the combined 18-2 doubles record across the three-day event is a promising indicator to the Cats’ potential success this season. However, as important as the results were, the chance to play together on the court once again was equally essential, senior Clarissa Hand said.

“It was important to just have everybody play next to someone,” Hand said. “We played a ton of doubles and combos. It was just more important to get some matches under our belt in the form of a dual match.”

Hand posted a 2-0 singles record, beating Butler’s Natalie Boesing in three sets 6-4, 6-7 (4), 6-3 on Saturday and then trumping Wisconsin’s Ava Markham in straight sets 6-4, 6-4 on Monday. She was one of five NU players to go undefeated in singles across the event. The Cats were 16-7 overall in singles.

The Badgers were competitive throughout the event, but NU claimed the overall victory 8-2 in doubles and 7-6 in singles matches. The Cats will host Wisconsin once again on Mar. 19 during the regular season.

“We knew Wisconsin’s a really good team,” Hand said. “We knew we had to go into certain matches expecting a battle. I’m really proud of everyone you know, for stepping up against tough opponents and we pulled some close ones out.”

Ultimately, the Wildcat Invite laid the groundwork for an NU squad looking to return to the NCAA Championships. The Cats fell to Texas A&M in the Round of 32 last season.

NU will travel to Nashville over the weekend to face Vanderbilt on Sunday as the regular season gets underway.

“We had three really long days, but we were all happy just to be out there competing,” Hand said. “One of our takeaways was that we are a really good team this year. And we’re just excited to get going after we had a really good weekend and have that foundation to build upon.”