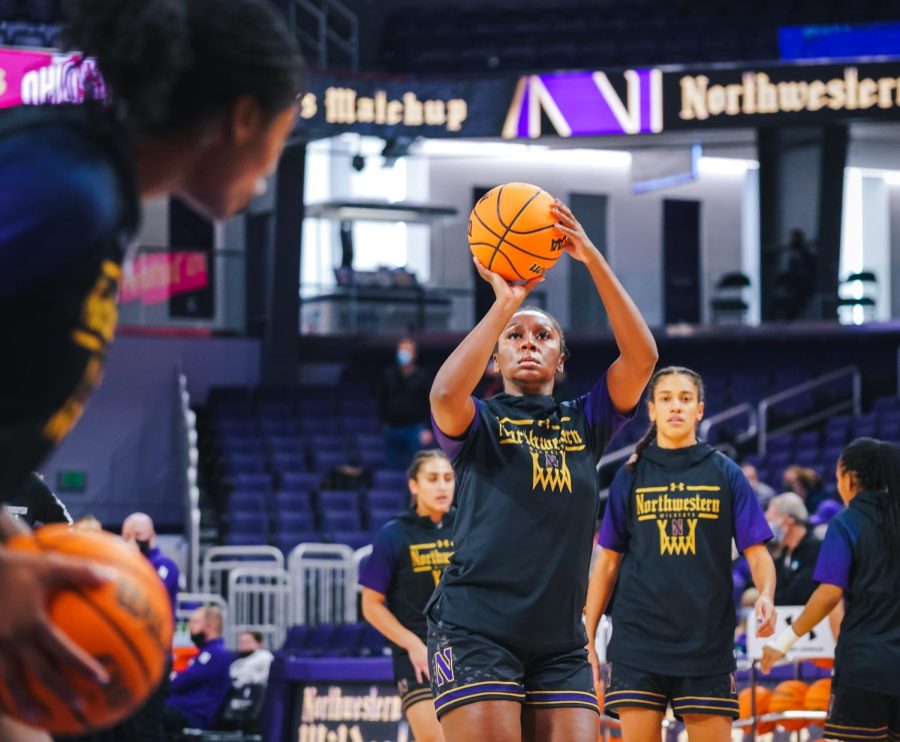 Northwestern warms up before its game against Ohio State. The Wildcats fell 65-46 to Michigan State Sunday in East Lansing.

Coming off of a close win over Rutgers Thursday, the Wildcats (11-5, 3-2 Big Ten) headed to East Lansing, Mich. with a ton of momentum. But just a few minutes into the contest, the Spartans’ (9-8, 3-3 Big Ten) size and fast break transition plays presented obstacles the team wasn’t expecting.

Averaging 14.6 turnovers per game entering the contest, NU recorded a whopping 21 turnovers against Michigan State. McKeown said the Cats’ mistakes inside the paint cost the squad tremendously, allowing the Spartans to go on long offensive runs early. He also felt NU struggled to connect on the court, not working with each other off ball to make plays.

In one of the lowest scoring performances for the Cats this season, freshman forward Caileigh Walsh and junior guard Laya Hartman led the team in scoring with 10 points. Senior guard Veronica Burton tallied with nine points, tying her season low performance against Milwaukee in December. Going 31.9% for field goals, NU’s shooting slump was evident the entire game.

However, NU appeared to overcome the challenge late in the second quarter, taking the lead and forcing Michigan State into turnovers in transition. But when the Spartans hit a buzzer-beating 3-point shot to end the half, the Cats’ growing intensity faded immediately.

“We have to finish,” McKeown said. “I don’t know if Michigan State’s size threw us off, but we had shots, like layups and pull up jumpers, that we usually make and couldn’t today.”

Down two points, it seemed NU could start the third quarter strong, as the team has come back from worse deficits this season. But instead of switching into high gear, the Cats started with a lack of energy, giving the Spartans the chance to extend their lead.

Heading into the second half, McKeown said he was optimistic about the team’s comeback, but he admitted Michigan State’s three-pointer halted their run. After a scoring drought almost three minutes in length, NU made their first free throw in the third quarter with 7:20 remaining.

For the remainder of the quarter, the Cats were fighting an uphill battle, trying to slow down the Spartans’ high attacking offense. Whether it was size or tiredness, NU could not get into their rhythm, missing shots and failing to get offensive rebounds for second chance opportunities.

The last 10 minutes of the game were anything but pretty for the group — Burton got into foul trouble early in the half and the team still struggled with turnovers. Even though Michigan State dictated the game from the beginning, the Cats stayed hungry, trying to make a last-minute comeback.

But they were unsuccessful, losing 65-46 and earning their second Big Ten loss of the 2021-22 schedule. After a couple rest days, the squad will return to Welsh-Ryan Arena Thursday to face Penn State.

“Just a rough last three minutes of the game,” McKeown said. “(The Big Ten) is physical, but you’ve got to find ways to score. That’s the challenge for us right now.”

— Women’s Basketball: Wildcats pull off win despite yet another schedule change