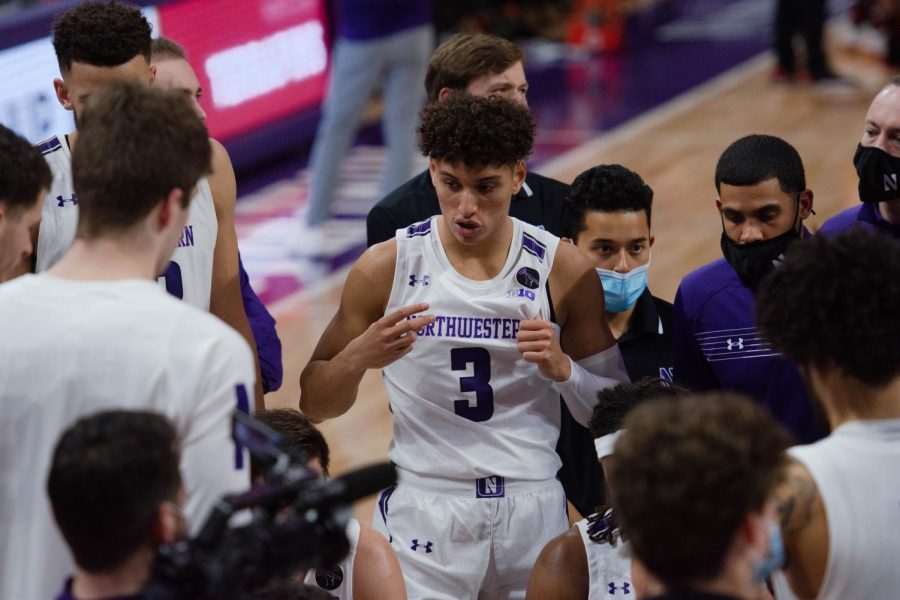 Ty Berry and his teammates stand in a huddle. Berry scored two points in the Wildcats’ 64-62 win over No. 10 Michigan State.

Young, who came into Northwestern’s 64-62 win over No. 10 Michigan State averaging 16.6 minutes per game for the Wildcats (9-6, 2-4 Big Ten), totaled 18 points and eight rebounds in 27 minutes of action. In a game where the Wildcats were missing their best player in senior forward Pete Nance, Young’s production was immense.

Collins called Young’s second-half performance, where he notched 13 points on four-for-eight shooting and shot five-for-six from the free throw line in the Breslin Center, “fantastic.”

Advanced statistics love Young. He’s the highest-rated player on the Cats’ roster, according to Evan Miyakawa’s Bayesian Performance Rating, which combines a player’s offensive and defensive efficiency into one metric illustrating overall value. That notion lends itself well to Collins’ labeling of Young as a starting-level talent since the beginning of the season. Regardless, he only saw his first start in light of Nance’s absence.

Sophomore center Matthew Nicholson’s emergence was also crucial. Nicholson totaled just 13 minutes of action, but he held his own against the Spartans’ bevy of talented frontcourt players. His five points, six rebounds and three assists cannot be understated, especially for a player who last played against D-2 Illinois-Springfield.

The performances of frontcourt duo Young and Nicholson compensated for the loss of Nance and graduate student forward Elyjah Williams. Their play helped secure a much-needed victory.

Young’s numbers point to a potential fruitful lineup tweak for NU going forward. He shot 50% from the field and 75% from the charity stripe against Michigan State. His offensive and defensive efficiency rank in the top two in both categories for the ‘Cats, per Miyakawa; his effort is invaluable.

NU now has the Quad 1, resume-boosting win they needed. With matchups against Top 25 foes in Wisconsin, Purdue and Illinois all on the horizon, opportunities are ripe to take a step or two closer toward Selection Sunday — and Young has the potential to be at the forefront of that charge.

“The last couple weeks were disappointing, but today, hopefully, can be a positive momentum builder,” Collins said of the Cats’ spirit and fight amid the recent struggles. “There’s 14 games left, and you’ve got to take them one-by-one. You’re judged by what you do at the end of 20, not by the end of six games.”