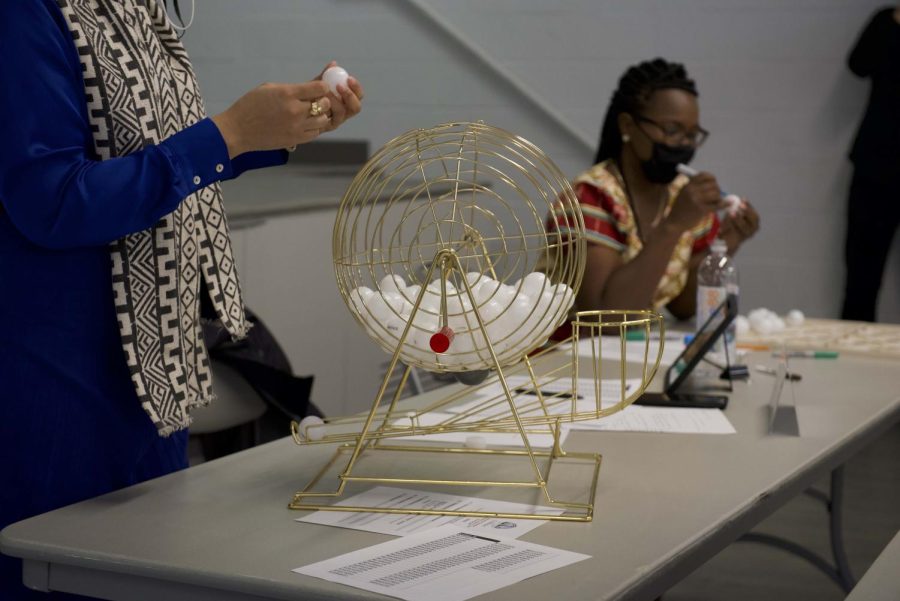 A bingo cage sits on a table. Reparations Committee members drew numbered ping-pong balls from this cage to select the order of Ancestor recipients at Thursday’s meeting.

Evanston’s Reparations Committee selected the first residents to receive reparations through the Restorative Housing Program at a Thursday meeting.

Livestreaming from the Fleetwood-Jourdain Center, committee members drew numbered ping-pong balls from a bingo cage to determine the order in which the 122 recipients in the Ancestor category would receive $25,000 housing benefits. All Ancestors, people who lived in Evanston as adults between 1919 and 1969, will receive benefits before the program moves to Direct Descendents, whose parents or grandparents fit the Ancestor criteria.

The first 16 recipients will receive their benefits from the initial $400,000 budgeted for the program, while the remaining 106 will receive benefits in the order of the draw and as City Council allocates additional funds to the program into the future.

Recipients can choose to put their benefits toward a down payment on a new home, an existing mortgage or renovating an already-owned property. Community Partners for Affordable Housing, a nonprofit group, will manage the first 16 recipient’s benefits, in line with a partnership approved by the committee last week.

Before the draw, committee members discussed the significance of selecting recipients for the first program in the city’s larger $10 million reparations initiative. Former Evanston/Skokie School District 65 board member Bonnie Lockhart said she is proud the committee’s work will directly benefit ancestors of the Black Evanston community.

“I am just so grateful that on this momentous day in history, that our ancestors are being honored,” Lockhart said. “They never gave up and they fought the fight, and we will continue to fight the fight.”

Former 5th Ward Ald. Robin Rue Simmons led the effort in City Council to create the initiative. She said the housing program’s development is one focused but important step in the broader path towards reparations.

Rue Simmons said she is proud of this first step and how far the city has come.

“We are moving forward with tangible repair that is within our purview and in direct correlation to the harm enforced by the City of Evanston,” Rue Simmons said.

Separate from the council’s future housing program allocations, $9.6 million remain in Evanston’s initial reparations fund to be allocated to other programs. As the housing program prepares to distribute its first benefits, community stakeholders like Dino Robinson, founder and executive director of the Shorefront Legacy Center, are already looking to what other programs might be created.

Robinson co-authored a report which compiled information on historical city policies that could inform future reparations programs. He told The Daily that housing was the report’s most desired basis for reparations, but he hopes stakeholders will now shift focus to its other key areas such as education and economic development.

“I envision one day that the funds are there enough that every Black student graduating from the high school has a scholarship to a four-year university, or a two-year unit college, or trade school,” Robinson said. “Whatever that looks like, I see that moving forward.”

This story provides initial reporting of the reparations selection process, and does not reflect the full extent The Daily wishes to report on the program. More in-depth coverage with wider perspectives will be published in the coming weeks.