Women’s Basketball: Wildcats pull off win despite yet another schedule change 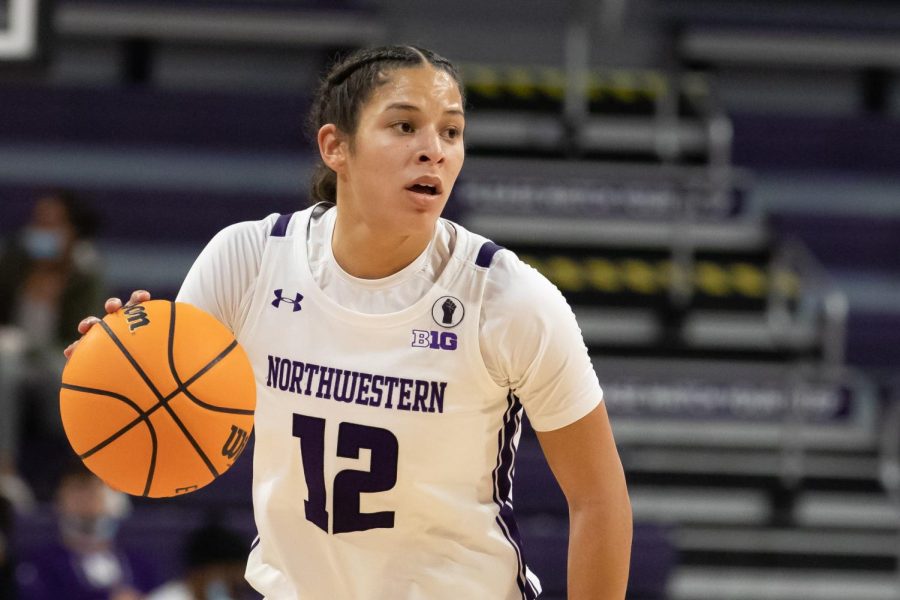 Northwestern women’s basketball has dealt with a three-week layoff from play, a schedule change, online school and no students allowed in Welsh-Ryan Arena. Despite all this, the Cats pulled off a 68-63 victory against Rutgers.

This game wasn’t even supposed to happen.

Northwestern was due to play Illinois Thursday in Champaign, Ill. But because of the Big Ten’s recent rescheduling outburst, they instead wound up at Welsh-Ryan Arena playing Rutgers.

After the first quarter, it appeared that nobody had told the Wildcats about such a change, but with 6:59 left in the second, they quickly figured it out.

It took the Scarlet Knights too much time to cross halfcourt. Upon forcing the backcourt violation, five white NU jerseys sent an electric wave through the mostly empty building. NU was down 17-14, but the next few possessions went like this:

A Veronica Burton steal led to a Laya Hartman 3-pointer.

A Rutgers offensive foul led to a Lauryn Satterwhite 3-pointer.

Three possessions, three NU defensive stops, three three-point plays. After that stretch, the Cats never looked back, closing out the Scarlet Knights in a too-close-for-comfort 68-63 victory.

“We gotta get off to better starts,” coach Joe McKeown said. “We started slow, we came back in the second quarter. I thought our defense in that stretch was really good. Our communication was good, and then we started to loosen them up a little bit.”

Ohio State stomped out NUs six-game win streak Sunday with what felt like more than just a 13-point victory for the Buckeyes. The Cats beat Iowa several days before, but their game against the Hawkeyes was their first in about three weeks.

“It’s a lot,” McKeown said. “We’re being thrown a lot. It’s hard to prepare as we’re all going through these big changes.”

In addition to the expectedly unexpected scheduling updates, NU has not allowed students to attend sporting events. Nevertheless, the Cats made it a point to bring the intensity.

“‘Create our own energy’ is what we were telling ourselves as soon as we got to shootaround today, throughout warmups, and even throughout the game,” senior forward Courtney Shaw said. “We want to play as hard as we can on the court no matter who’s in the stands.”

With all of this turmoil swirling around college basketball, NU can look forward to Thursday. Barring unforeseen circumstances, it will be the first home game in which students will be back to games.

Shaw and Burton looked at each other in the postgame presser with relief, thinking about having students back in the bleachers.

Burton finished with 18 points, nine assists and her season average of four steals.

For all intents and purposes, this game should not have been close; Rutgers is 0-6 and tied with Wisconsin at the bottom of the Big Ten. But with everything going on in Evanston, the Cats will take the win.