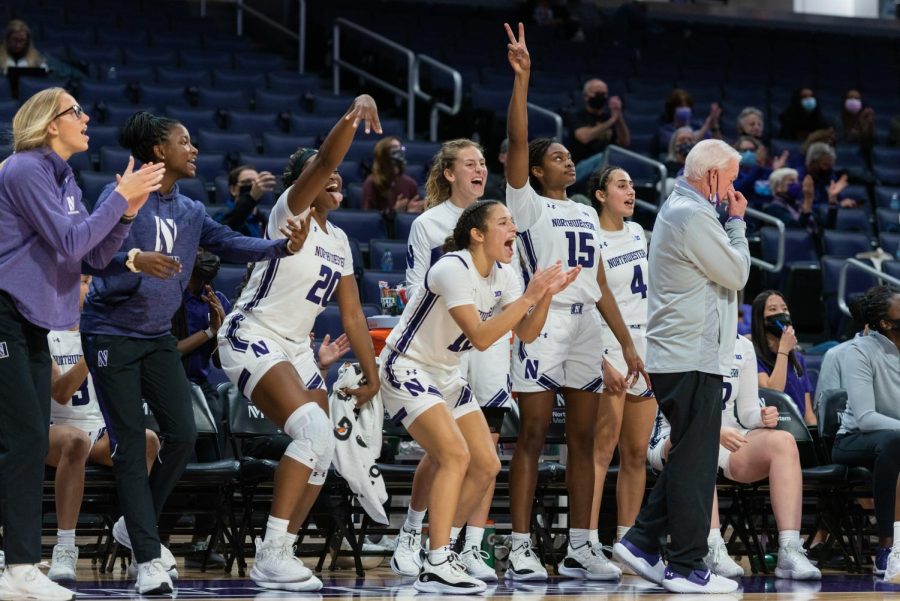 Northwestern players celebrate from the bench in Welsh-Ryan Arena. Three Wildcats tallied over ten points in their Thursday win over Rutgers.

Northwestern is finally beginning to “put the band back together,” according to coach Joe McKeown.

A lack of practice in the last month due to COVID-19 cases within the program has left the team weak in some areas of play. After their struggling offense led to their first loss in the Big Ten earlier this week, the Wildcats (11-4, 3-1 Big Ten) found their groove in a 68-63 win over Rutgers (7-11, 0-6) on Thursday night.

NU started slow, trailing by as many as six points in the first quarter. But the team gained valuable momentum with nine unanswered points midway through the second quarter and, in true Cats fashion, they were all off turnovers.

It began with a classic steal by senior guard Veronica Burton, who then passed the ball to junior guard Laya Hartman for a 3-pointer. After a Rutgers timeout, another turnover gave way to a second Cats three, this time by graduate guard Lauryn Satterwhite. Finally, a shot-clock violation by the Scarlet Knights handed the ball to NU yet again and resulted in a driving layup by Burton that became a three-point play.

“We have to get off to better starts,” McKeown said. “But I thought our defense was really good in that stretch, our communication was really good, and we started to loosen (Rutgers) up a little bit and get better shots.”

The Cats’ offense held their own on Thursday, boasting three double-digit scorers: Burton, senior forward Courtney Shaw and freshman forward Caileigh Walsh. Hartman was close behind with nine points by the end of the contest.

“I think that’s always the goal,” said Burton, when asked about the all-around strong scoring performances from her teammates. “We know what everyone on the floor is capable of, so being able to spread the floor and get everyone involved is huge for us.”

Despite these exceptional scoring performances and NU’s impressive turnover margin, the Cats lost much of that gained momentum as the game drew to a close. What was a 15-point lead fell to a seven- and eventually a one-point advantage with just over a minute and a half to play.

A blocked jumper from Burton gave Rutgers’ shooters the ball and a chance to erase what little lead NU had left — if not for a quick steal by freshman guard Melannie Daley. She drove the ball down the court for an easy layup, which restored more confidence in the Cats’ now-three-point lead with 45 seconds left and ultimately secured the victory.

Daley went zero for five from the field with zero points in the first three quarters of the game. However, she proved essential in NU’s victory as the only player to record a field goal in the fourth quarter and ultimately tallied eight points in nine minutes.

“Today there was just a difference in (Daley’s) body language and her attitude,” Burton said. “It was a huge growth step for her, honestly, to not let her previous shots get in her head. I was definitely really proud of her and she really helped us down the stretch.”