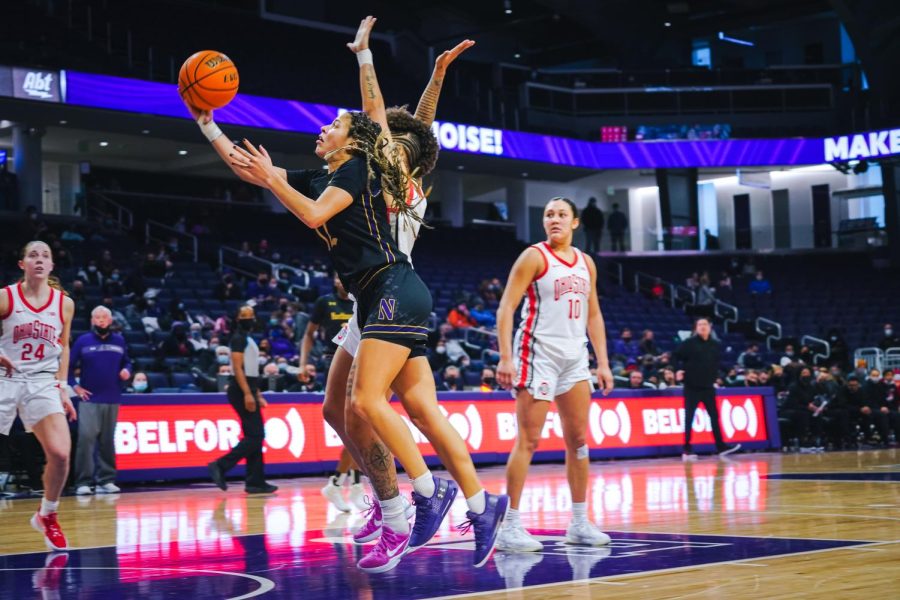 Northwestern senior guard Veronica Burton hits a layup inside the paint. Burton finished the night with 18 points against Rutgers.

Following a rare down performance from Northwestern against Ohio State Sunday, the team looked to bounce back in their second home game of the new year against Big Ten powerhouse Rutgers.

At the start of the first quarter, the Cats appeared tamed, playing timid on the floor and trying to slow down the pace of the game. The Scarlet Knights seized the opportunity, taking an early lead. Despite the slow start, NU found their rhythm, applying high pressure on the defensive end of the court and cutting down Rutgers’ lead. By the first media timeout, the Cats were within two points, highlighting the squad’s fast transformation.

Senior forward Courtney Shaw stepped up to the Scarlet Knights’ challenge from the first minute of regulation. Only 10 minutes into the contest, she came up with two big blocks to hold off Rutgers from extending their lead.

However, the second quarter showed a sloppy NU group, as the Cats made careless mistakes and turnovers inside the paint to give Rutgers second chance offensive opportunities. But NU got back into the swing of things, evening the score with six minutes left in the half. Burton’s back-to-back defensive plays led to the Cats taking the lead, and showed how stealthy the Backcourt Burglar truly is.

The fate of the matchup wasn’t sealed quite yet, as the Scarlet Knights had a quick run at the start of the third quarter, attempting to cut into NU’s lead. But Shaw wouldn’t let that happen, hitting a fading jumper to end the Cats’ scoring drought. Then, Burton kicked into high gear, grabbing back-to-back steals for fast break transition plays.

With late turnovers by the team in the third quarter, NU had to come strong in the last ten minutes of regulation to secure the win.

In the last 10 minutes, the Cats picked up the intensity, hustling on both ends of the floor to defeat their conference opponent. Shaw and Burton delivered in the fourth quarter, making layups and blocking Scarlet Knights’ shots to preserve NU’s lead. In addition, Walsh used size to her advantage, drawing Rutgers fouls to take free throws.

Although the Scarlet Knights cut the Cats’ lead by one, freshman guard Melannie Daley hit a life-saving layup to extend NU’s lead to three, leading to NU’s win.

Courtney Shaw remains one of the Wildcats’ best backcourt defense players. Five minutes into regulation, Shaw came up with monumental blocks and rebounds to help NU turn the game around. Her ability and quickness inside the paint proves to be a strong obstacle for the Cats’ opponents. After suffering injury last season, Shaw has made a name for herself as one of the most powerful threats for the program.

Known for her defensive dominance, Veronica Burton proved Thursday exactly why she’s called ‘The Backcourt Burglar”. With two big steals at the end of the half, her defensive stops allowed NU to grab the lead and change the momentum of the game. Not only a powerhouse on defense, the senior guard led the team in scoring, filling the offensive shoes of Northwestern guard Lindsey Pulliam. Burton’s presence on both ends of the floor has played a central role to the Cats’ success this season.

Next, the Wildcats head to East Lansing, Mich. to face Michigan State. With Burton and Shaw putting up great performances against Rutgers, the dynamic duo must be on their A-game against the fast-paced Spartans. As they move deeper into the conference schedule, NU will need to come up on top more often to secure a high seed in postseason play.