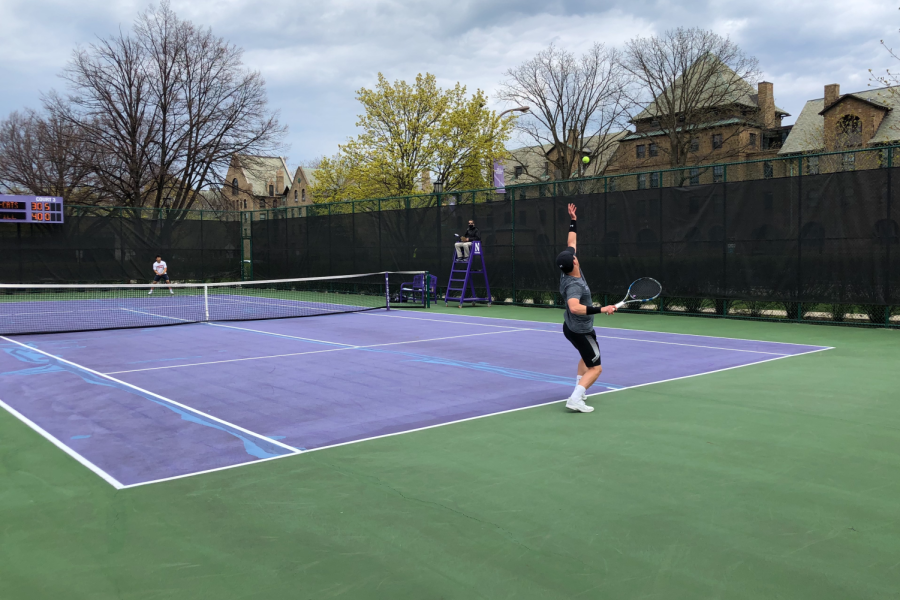 Trice Pickens prepares to serve. Pickens is the highest-ranked Northwestern player in singles.

The Wildcats and Cougars are familiar foes. In the past decade, the teams have squared off seven times — all seven of which resulted in shutout wins for NU.

“They’ve got a good team this year,” Swan said. “We’ve been trying to focus on ourselves and make sure we’re able to put together a good doubles point.”

Swan, who has been considering different doubles combinations, is open to varying the singles and doubles order between the two contests. He stressed the importance of experimentations in a non-tournament match situation as the spring season opens.

Swan also had high praise for senior Steven Forman and sophomore Presley Thieneman. He called Forman’s play atop the singles lineup for most of last season “outstanding” and noted Thieneman’s consistency with his 12-0 singles record last season and undefeated MVP run during September’s Bobby Bayliss Invitational at Notre Dame.

He and his brother, junior Russell Berdusco, are both vying for a singles selection.

“(Brian’s) work ethic is really good,” Swan said. “He practices with good energy, he’s a great teammate, his experience and winning a national championship is going to be very helpful for our team from a leadership standpoint.”

Some less-experienced Cats could see on-court action as well. Sophomore Saiprakash Goli, still looking for his first team appearance, made it to the second round of the Big Ten Singles Championship.

“It’s a crucial part of college tennis, dealing with the pressure of match play,” Goli said. “I think it was good that we were able to play some matches at the Big Ten tournament.”

Nordby and Bratholm are close friends. Both represented Norway at the Davis Cup and attended the same high school.

“I was really happy when (Nordby) committed to Northwestern,” Bratholm said. “Over break, we played with each other almost every day.”

NU’s season only gets tougher from here. As the Cats face at least six ranked teams this season, they must prepare for a range of unfamiliar opponents after a Big Ten-heavy 2021 schedule.

“They’ve got new players we don’t know … so we’re going to have to make some adjustments throughout matches early on,” Swan said. “It’s great to be back playing a non-conference schedule.”

— Men’s Tennis: Northwestern qualifies for its first NCAA tournament since 2017