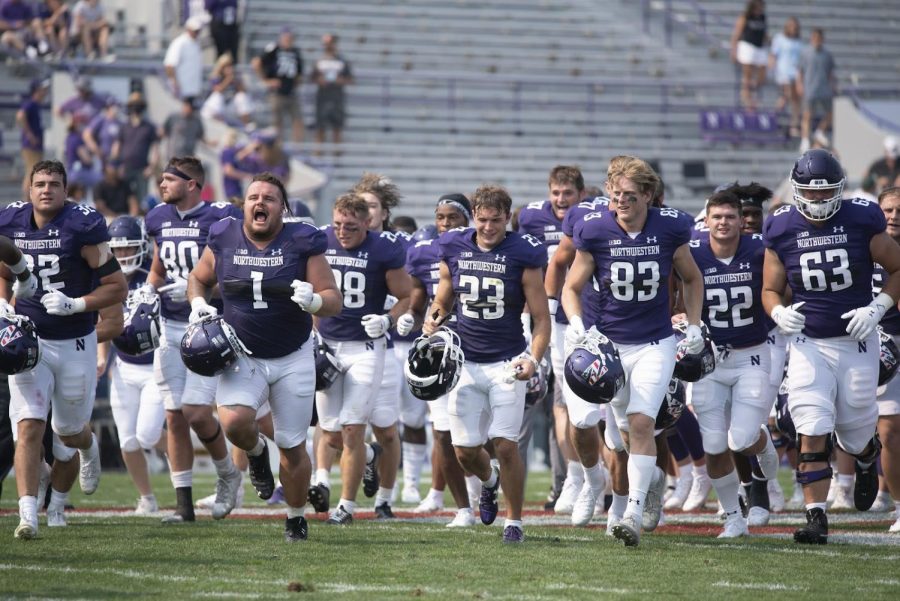 Northwestern players celebrate a 2021 win over Indiana State. The Wildcats may find wins hard to come by in 2022, Sports Editor Patrick Andres writes.

A celebrated Fitzgerald — F. Scott, not Pat — once wrote there are no second acts in American lives.

For 27 years, Northwestern has begged to differ. The Wildcats were among the worst major college football teams in America as the game boomed onto color and cable television from the 1960s to the 1990s. They were the “Mildcats,” owners of the longest losing streak in major college history and a hopeless anachronism in an Ohio State-and-Michigan-centric league and world.

It’s been a different story since 1995. NU has since played in 15 bowl games while passing the torch from Gary Barnett to Randy Walker to Fitzgerald. The Cats have made something of themselves through coaching, recruiting, money and dumb luck — which is precisely what makes their current position so precarious.

From a big-picture standpoint, the world in which NU underwent its image reinvention is over. At the dawn of the 21st century, enterprising teams could scheme their way to upsets. The Cats pioneered this, airing the ball out and scoring 36.8 points per game en route to their most recent Big Ten title in 2000.

But these are different days: the teams that already had the talent, namely the Buckeyes and Wolverines, are now running the wide-open offenses. And at NU, defensive whiz Mike Hankwitz is no longer around to try and stop them.

The Cats’ task would be hard enough with only that impediment, but changes off the field have taken their toll as well. The advent of name, image and likeness rights has created a tumultuous new landscape, and NU has seen the transfer portal both giveth (hello, Peyton Ramsey and Ryan Hilinski) and taketh away (goodbye, Brandon Joseph and Jordan Mosley).

If the changing college football world raises red flags for the Cats in the long term, Joseph and Mosley’s departures raise red flags in the short term. Joseph’s two seasons in Evanston were among the greatest in NU history, and he flashed bonafide NFL talent. His transfer to Notre Dame leaves an enormous hole in an already thin Cats secondary.

Mosley, on the other hand, caught just one pass in 2021 but was a four-star recruit at the wide receiver position. He seemed to symbolize new recruiting frontiers for NU: 30 days after winning the 2021 Citrus Bowl, it could suddenly go into Alabama and snag a top talent from the heart of SEC country. It sounded too good to be true, and it ultimately was, as Mosley will ply his trade next year for Mississippi State.

Somehow, the bad news doesn’t end there. The Cats’ already difficult 2022 schedule was made significantly harder earlier this week by a series of revisions that swapped out Indiana for Penn State. Next year, in addition to its usual West Division fare, NU will have to deal with the Nittany Lions in Happy Valley, Ohio State on a season-long revenge tour and a rejuvenated Maryland on the road.

Fitzgerald, the defensive star of college football’s most memorable turnaround, is no stranger to complete reversals of fortunes. Back-to-back 5-7 seasons in 2013 and 2014 became a 10-3 2015. He spun 2019’s 3-9 stinker into 2020’s 7-2 success under sui generis pandemic circumstances.

But as the Cats try to brush off their 2021 autumn of discontent, many of the things NU had working for it in the past are now gone. If the Cats are to qualify for their sixth bowl game in eight years — a figure that would have been unthinkable a generation ago — Fitzgerald’s 2022 coaching job may have to be his best. If it isn’t, a third dud in four years may loom, bearing NU back ceaselessly into the past.