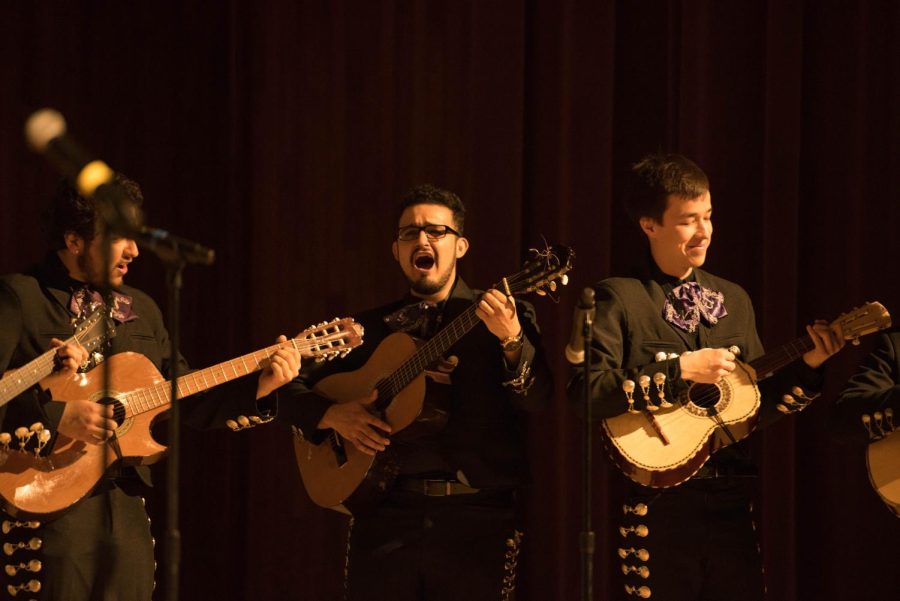 Members of Mariachi NU play traditional instruments at their spring showcase in 2019.

Craving the sweet sounds of “Las Mañanitas” on a birthday or “Cielito Lindo” for a special celebration but not sure where to look on campus? Mariachi Northwestern has your back.

Communication senior Mia Hodges serves as the president and one of the vocal performers of Mariachi NU. She had no experience with mariachi-style music, but Hodges said she joined Mariachi NU her freshman year to connect with this aspect of her culture.

As the group’s only senior, Hodges added she has watched Mariachi’s membership numbers dwindle and surge, putting pressure on upperclassmen to keep the group alive.

“I’m really proud of how far we’ve come, considering a lot of us are starting from scratch,” Hodges said.

Mariachi NU is open to all students, regardless of ethnicity, experience or year. According to Hodges, most students that join Mariachi NU have little-to-no experience with the style of music and learn new instruments to perform with the group.

Mariachi music typically includes violins, trumpets, guitars and occasionally accordions. It also includes some instruments specific to the style, such as the guitarrón — a large, deep-sounding string instrument similar to a guitar — or the vihuela, a smaller string instrument shaped like a guitar but tuned more similarly to a lute.

“They get to play some of the rarest instruments in the world, and they get to be the experts of it at this university,” Hodges said. “For the future, they get to pass that down. They get to literally pass down culture, pass down tradition, which is a really beautiful experience.”

Weinberg junior Isabella Brown joined Mariachi NU as a freshman. She serves as the group’s business chair and one of its trumpet players.

Mariachi NU performs several times a year, sometimes with Ballet Folklórico de Northwestern — a group that performs a traditional style of Mexican dance known as folklórico — or on their own at off-campus events such as weddings or birthdays. As business chair, Brown said she coordinates events where the group plays.

“I had never had any sort of group, Latin-based, Hispanic-based — doesn’t matter whether it was culture or music or anything. I had never had a group like that,” Brown said. “So coming to Northwestern in general was a great experience for me to get more in touch with culture.”

Communication freshman Esteban Ortiz-Villacorta is a new vocal performer for Mariachi NU. He said he auditioned for the group after a friend from his peer advising group told him about it, as he thought it would be a unique musical experience that would also connect him to his culture.

Much like Hodges and Brown, Ortiz-Villacorta said that Mariachi NU is special in that it allows students of all backgrounds to learn about Mexican culture and music.

“(Mariachi groups) make more sense in places like maybe Florida or Arizona where the Latino communities are higher,” Ortiz-Villacorta said. “But especially up here in Evanston, it’s kind of cool to be able to see that there’s still a group here that allows for those students who are a part of that background to either participate in the art or participate as audience members and be able to connect to that part of their heritage.”