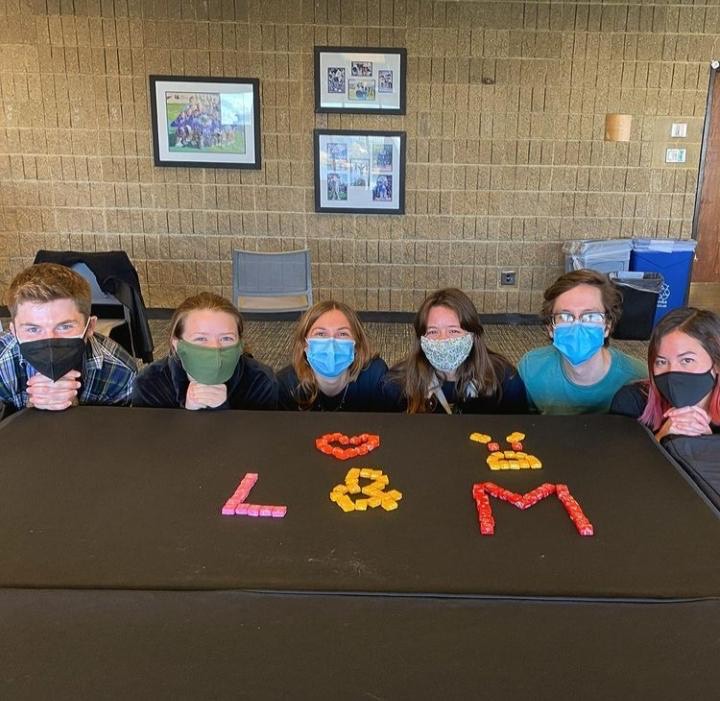 Lovers & Madmen members during the most recent round of new member petitions. The student theatre group produces exclusively classical and classically-inspired pieces.

Student theatre group Lovers & Madmen has one main guideline for the productions in their canon: The stories they tell must either be, or be inspired by, a work that is 100 or more years old.

Lovers & Madmen is one of nine groups in Northwestern’s Student Theatre Coalition. It is the only group on campus dedicated to telling classical and classically-inspired stories. For example, both The Lion King and Hamlet would be allowed because the former is based on the latter.

“We have specific guidelines that we don’t really deviate from, and even though it sounds like it would be constricting, it’s not,” said Communication junior Via Greene, the group’s executive director. “It’s freeing … there’s so much work that you can do within that canon.”

For Lovers & Madmen, that work begins with thinking about the stories it wants to bring to the stage. Members acknowledge many classic stories are imperfect, and Greene said exploring whether a story should be left unperformed or entirely changed is an important part of the group’s process.

Communication senior Brandon Acosta, Lovers & Madmen’s special events director, said the group also considers how it might bring the stories it tells into the future.

“I like to think of us as custodians of art,” Acosta said. “This art was here before us, it’s going to be here after us. How can we preserve it? How can we change it if we want to?”

Lovers & Madmen performs mainstage productions in Fall and Winter Quarters, with its next show premiering Week 8 in the McCormick Auditorium.

In Spring Quarter, its focus is on the Adaptation Festival, where student playwrights submit works they have adapted from classic stories. The group chooses three works and performs staged readings of them.

Greene said she appreciates how the Adaptation Festival allows for collaboration and the development of new theatre works. She especially values how the festival allows the group’s members to engage with classical pieces in creative ways.

Engagement with theatre, both from the audience and Lovers & Madmen members, is important to the group. Lovers & Madmen is made up of about half non-theatre majors, according to Medill senior Maya Reter, the group’s production manager and a former Daily staffer. Reter said she hopes their productions make classic stories accessible for audiences.

“There’s so much depth in these works that I think can be hard to get when you’re reading them on your own or assigned them for class,” Reter said. “I hope that our shows make it so these texts come to light, and so that (the audience) can understand the universality of storytelling.”

Reter added that many struggles and feelings expressed by classical stories are ones humans continue to face today. The group’s members want audiences to understand that despite the long history of many classics, their themes are timeless.

“It’s so fascinating for me the idea of how art can transcend time,” Acosta said. “I want people to leave our shows feeling empowered to re-examine any art in their lives.”

Related Stories:
— Bienvenidos a Miami to Shakespeare’s ‘Much Ado About Nothing’
— The Freshman Musical Opens Opportunities for First-Years
— How to Navigate the Northwestern Theater Scene