David: Democrats, it’s time to worry about the 2022 midterms 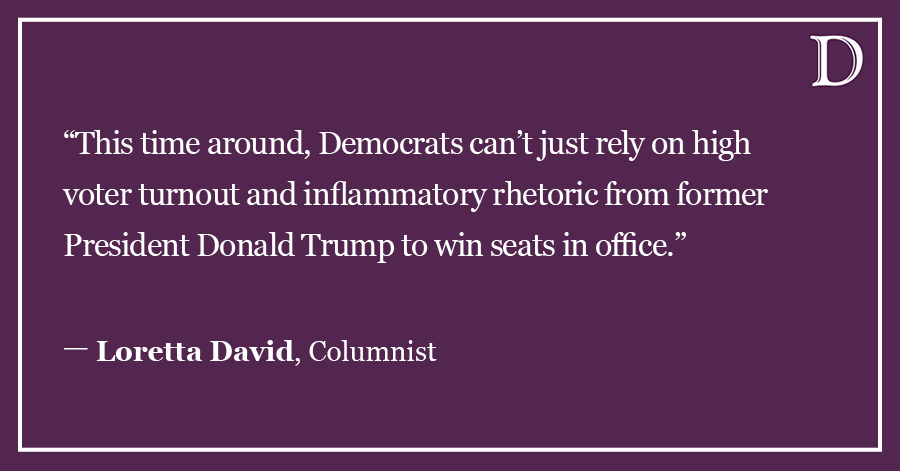 As the 2022 midterms approach in an incredibly polarized country, it’s time for Democrats to panic. President Joe Biden’s approval rates are plummeting, COVID-19 cases and inflation are rising and the Republicans are attacking the Democratic agenda from many angles. This time around, Democrats can’t just rely on high voter turnout and inflammatory rhetoric from former President Donald Trump to win seats in office.

Following the deadly Jan. 6 insurrection, Biden inherited a divided America that was, and still is, reeling from heightened racial tension, Trumpism and a deadly pandemic. Biden built his platform around uniting the country and ditching the party lines that divide red from blue — how poetic. Except, this is American politics we’re talking about. With a hostile Congress whose members air their differences out through Twitter beef and rising political extremism, Biden’s pleas for unity have fallen on deaf ears. Two important elections easily show the effects of Biden’s, and subsequently the left’s, fall from grace.

Take New Jersey’s 2021 gubernatorial election. New Jersey, a historically blue state, re-elected Democrat Phil Murphy by a razor-thin margin of 3.2%. Meanwhile, Virginia, a state that hasn’t had a Republican governor since 2009, elected Trump-supported Glenn Youngkin in what was seen as an upset. If Democrats are already losing ground in left-leaning states, one can only imagine what waits for them in potential swing states like Georgia and Pennsylvania.

Democrats losing control of the Senate or House of Representatives would likely stifle any progress towards their agenda. Democrats already have to work with a conservative-led Supreme Court, which may become even more conservative if 83-year-old Stephen Breyer doesn’t retire. With a narrow lead in both the House and Senate, it is imperative that Democrats not only retain but also gain seats in both chambers if they want to address issues on their agenda.

There is still a small sliver of hope for Democrats to turn things around. First, Democrats must band together and rally support for Biden’s agenda. Currently, Democrats are locked in a stalemate with Sen. Joe Manchin (D-W.Va.) over the Build Back Better Act, as the senator’s opposition has forced Democrats to consider renegotiating the bill. This defiance could be costly for the Democrats. More than ever, it’s imperative that Democrats show a united front among an emerging Republican Party.

Second, the left needs to win the votes from the older generation. Voter participation tends to increase with age, and in the most recent election, voters aged 65 to 74 had the highest turnout. It’s no secret that older voters tend to vote Republican and it’s a trend Democrats need to change if they want the midterms to work in their favor. At the end of the day, elections are decided by those who actually cast a ballot, whether it be in person or through the  mail-in ballot. By winning the hearts of older voters, Democrats have the potential to steer 2022 their way.

Third, Democrats need to get along. This means they must stop blaming their losses on the progressives within their party and start working on policies and campaigns that will keep them in office. Democrats have a long road ahead of them and history is not on their side. In recent years, most presidents who begin their first term with party control of both chambers often lose at least one in the midterm elections. It’s up to them to rise up against all the odds and run trailblazing campaigns that keep voters in their corner. After all, the future of their party depends on it.

Loretta David is a Weinberg freshman. If you would like to respond publicly to this op-ed, send a Letter to the Editor to [email protected]. The views expressed in this piece do not necessarily reflect the views of all staff members of The Daily Northwestern.