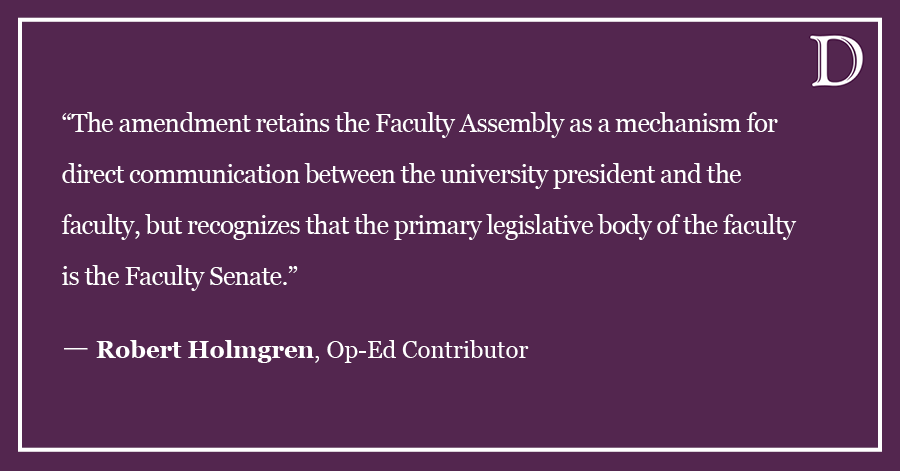 Over a decade ago, a committee from the previous faculty governing body was charged with establishing a more effective governance system for Northwestern faculty. Two bodies were established: the Faculty Assembly encompassing the entire faculty, and the Faculty Senate with membership elected from the departments, non-tenure eligible faculty and librarians.

Since its founding, the Faculty Senate has largely functioned as envisioned. Its standing committees evaluate issues of interest, engage with the central administration and author resolutions that are then considered by the full Senate. In addition to voting on honorary degrees, the main legislative function of the Senate is writing the Faculty Handbook, which governs the faculty’s relationship with the University.

Unfortunately, the Faculty Assembly has not functioned as envisioned. It was intended to have two main functions: a forum that allowed direct communication between the faculty and the president of the University as well as the Board of Trustees, and a mechanism by which the faculty could pass nonbinding recommendations and resolutions. This second function requires a quorum of 10% of the faculty. To my knowledge the Faculty Assembly has never had a quorum, and therefore, as a voice for the faculty, it has been mute.

We can either choose to ignore the past decade of experience, or ratify the proposed amendment to the assembly bylaws to strengthen faculty governance at NU.

The proposed amendments improve faculty governance by acknowledging that the principal legislative body of the faculty is the Faculty Senate, while preserving the Faculty Assembly for communication with the administration and as a grassroots mechanism for the faculty to voice their opinion when necessary.

Robert Holmgren is the president of the Faculty Senate. If you would like to respond publicly to this op-ed, send a Letter to the Editor to [email protected]. The views expressed in this piece do not necessarily reflect the views of all staff members of The Daily Northwestern.