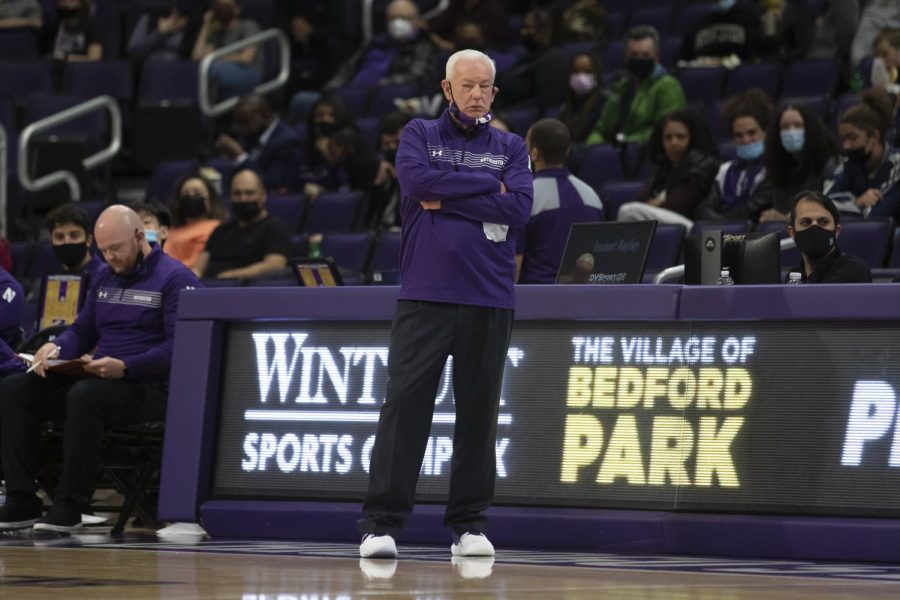 Coach Joe McKeown. His “Blizzard” defense was able to hold No. 22 Iowa to 69 points in the Wildcats’ upset in Iowa City.

“The Blizzard” is Northwestern women’s basketball’s nickname for its 1-1-3 match-up zone.

It depends on agitation and chaos, turning basketball into a kind of Iditarod. Not so much a game against another team but a fight against an opaque, unforgiving landscape.

This concoction created by coach Joe McKeown has been a staple for his team for years now, as the Wildcats have been known for their stingy defense. Going into tonight’s matchup against No. 22 Iowa, the Cats had an average of 10.4 steals, 6.5 blocks and 57.8 points allowed per game.

Ultimately, the defensive storm came out on top, and Northwestern pulled off their first win of the season against a ranked opponent with a score of 77-69.

Sixty-nine points, at first glance, didn’t look too flashy for the Cats on the defensive side of the ball. It’s 12 above what they’ve allowed on average, but it was against a team that averaged 86.2 points per game last season.

“They’re just a really good offensive team,” McKeown said. “They’ve been one of the best offensive teams in the country the last 10 years.”

Iowa’s star point guard and the Big Ten’s leading scorer Caitlin Clark tried to muscle her way through with her momentum from a 44-point contest on Sunday that translated into 30 points on Thursday.

Senior forward Monika Czinano did her best to crack the defense as well with 20 points of her own. She had a then-career-high 34 against the Cats last year, but the team’s turnover total of 23 led to their demise in the game.

Following a pattern, the Cats caused Iowa to turn the ball over 18 times in tonight’s game. Veronica Burton — the Blizzard’s Abominable Snowwoman — led the way, adding eight steals to the team’s total of 12.

“When you got Veronica Burton on your team, you know she’s not going to let anybody down as far as energy and attitude about playing goes, and it showed tonight,” McKeown said.

Burton also led the way with 25 points, and was helped by first year Melannie Daley, who put up a career high of 22.

NU, which had three consecutive games canceled or postponed, hadn’t played in about three weeks, and McKeown felt as if the team’s performance hung in the balance.

“Coming into tonight, it was like flipping a coin for how we were going to respond, not being able to even touch a basketball because of quarantine,” McKeown said.

The sentiment being concerned about his team coming out a bit stiff after such time away from the court was fair. But fortunately for the Cats, they came out cold as ever.

— Women’s Basketball: How the ‘Backcourt Burglar’ created a name for herself to become the face of Northwestern women’s basketball

— Women’s basketball: After leaning to both extremes in first half, Wildcats beat neighboring Loyola