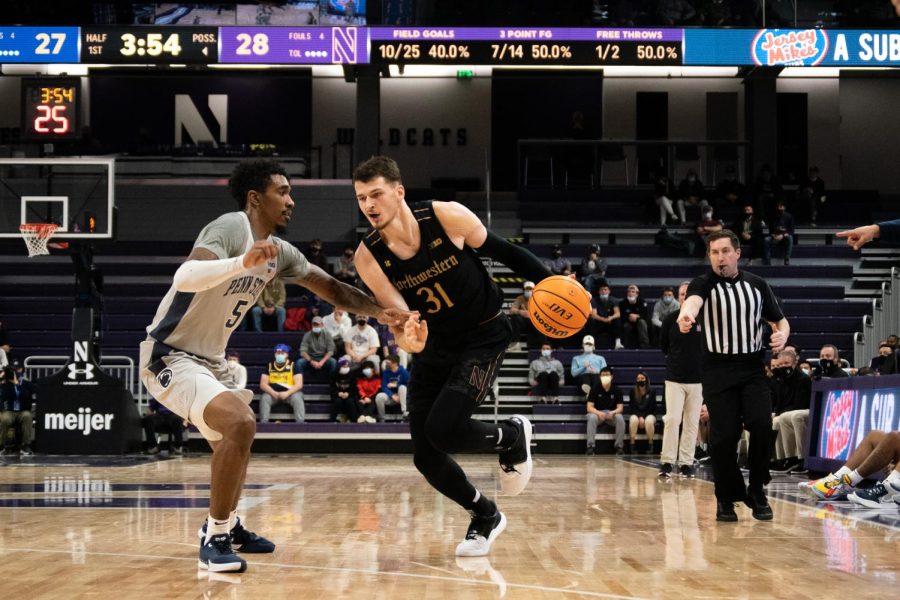 Neither try — between Nittany Lions forward Seth Lundy’s 3-point prayer with 36 seconds left and junior Wildcats guard Boo Buie’s acrobatic layup attempt on the next possession — appeared upon release to be headed for anything other than disaster. But Lundy’s shot was true and Buie’s offline, and NU was left nursing a second straight defeat in which its opponent rallied from a second-half deficit.

“It was a 3-point game after the Lundy bucket, and we set up a play that had some different options,” coach Chris Collins said of the critical sequence. “It had a 3-point option, it had a backscreen to the other side for a potential 3-point look. We just wanted one of the guys to make a play.”

The Cats made plays throughout the first half and early in the second, leading 53-43 after Buie swished a three with 10:15 to play. It was a fitting way for NU to build its largest advantage, as the Cats shot better from 3-point range (46.2%) than they did from the field (42.6%).

Trouble eventually found NU as it did against Michigan State, though, as Penn State guard Dallion Johnson and forward Greg Lee sent the Cats reeling with a pair of threes that pulled the Nittany Lions within six. Mere moments later, Penn State guard Sam Sessoms hit a jumper to tie the game at 57.

“It’s the old ‘make or miss league’ sometimes, and give (Penn State) credit for that,” Collins said of the Nittany Lions’ late barrage. “I thought the shots we got were better than their shots, but sometimes that’s not what it’s about.”

A Lundy four-point play with 2:25 left gave Penn State a 63-61 lead, but senior forward Pete Nance did his best to keep NU solvent. He drove for a layup to tie the game at 63, and ate up Nittany Lions forward John Harrar’s go-ahead layup attempt with a vicious block more than a minute later.

Nance missed the ensuing jumper, however, and opened the door for Lundy’s late-game heroics. The Cats couldn’t overcome Buie’s miss despite a trio of late buckets from junior forward Robbie Beran, Buie and Nance.

“It’s not a matter of who scores for us, it’s just taking what the defense gives you,” Beran said. “We have a veteran locker room, so it’s on us to make the most of every possession.”