The WasteShed Evanston brings creative reuse to the North Shore 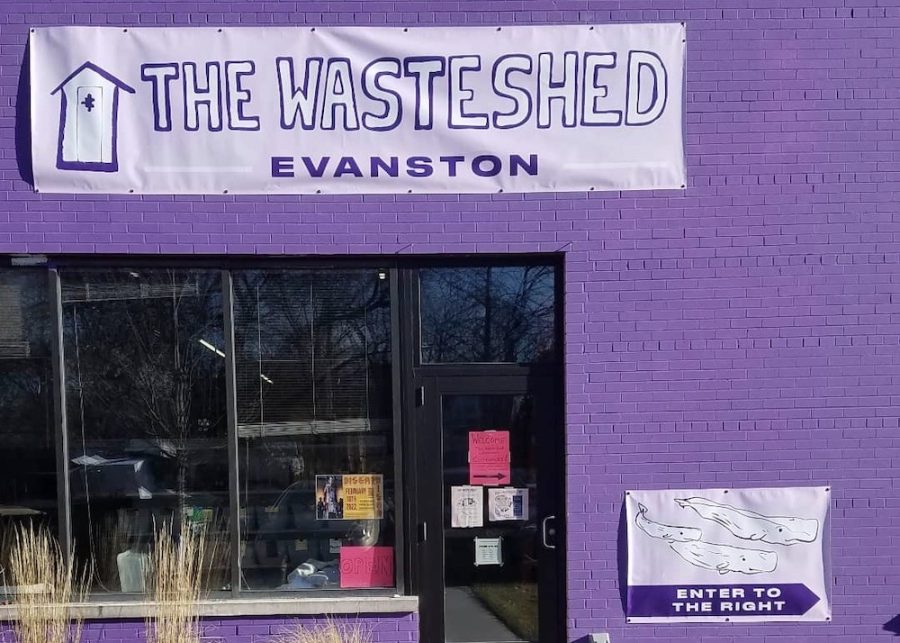 The exterior of The WasteShed Evanston, which shares a building with Evanston Rebuilding Warehouse.

Not everyone would expect to see a coffin-turned-ball-pit when they walk into an art store, but at The WasteShed in Evanston, customers can see exactly that and more unique, donated items.

“People walk into a grocery store and they have a very specific list of things that they need,” Volunteer Coordinator Teresa Meza said. “That’s not really going to work at The WasteShed.”

The WasteShed opened its Evanston location Nov. 20 at 1245 Hartrey Ave. At the intersection of art, education and sustainability, the nonprofit takes new or used art supplies and craft materials and sells them at low prices. By Dec. 20, they received over 7,000 pounds of donations.

Eleanor Ray founded the original WasteShed in Chicago in 2014 with the hope of creating a space that provides art supplies at a reasonable price while tackling an overabundance of waste. Creative reuse, which involves taking objects and reimagining its use in an inventive or artistic way, was a pillar of her own artwork and she wanted to share the idea with the Chicago community.

“A lot of good materials are going to waste,” Ray said. “So I created The WasteShed as a way to kind of close the loop and turn trash as a liability into an asset for the creative community.”

The store features a section of school supplies that are free to teachers, who also get a 25% discount for the rest of the store. Ray said it was important to her to provide teachers with art supplies, as many pay out of pocket for these products.

Chicago resident Jenn Romero considers The WasteShed an integral part of her life. A customer of the store and friend of Ray’s for many years, she utilized The WasteShed’s low prices to pick up new crafting hobbies during the pandemic.

“It doesn’t feel like a store or even like a nonprofit,” Romero said. “You go in, and it’s just this magical space where you can let your creative imagination go wild.”

Romero used to work in education and nonprofits, where she worked with many low-income people, she said. When families were in search of art supplies, she would frequently refer them to the store, which she called the “library of cool stuff.”

Romero’s favorite object she bought from the store is a dried starfish. She has not visited the Evanston location due to COVID-19 fears and travel time, but said it is on her to-do list.

Meza first met Ray in 2013 while running a nonprofit thrift store in Oak Park. Meza has served many positions at The WasteShed in the years since, and took on her current position of volunteer coordinator a few months ago. She hopes that the store will help pave the way for a future where artistic expression doesn’t harm the planet.

“The world is melting — literally. We create a lot of waste just going about our daily lives, and there’s no reason why art should have to be generated out of new product,” Meza said. “Creative reuse is just so natural to so many artists that they see what they have, they have constraints, and they can make something new and beautiful out of it.”

Due to the recent spike in omicron variant cases, The WasteShed is holding off on scheduling many events. In the future, though, Meza said they are looking to expand programming and education, as well as increase outreach to the Evanston community.

They will still hold Discardisco, an annual trash-to-fashion competition, Feb. 10 at Beat Kitchen in Chicago. Until then, Ray said she looks forward to deepening connections with The WasteShed’s new neighbors.

“It’s really been incredible to sort of just see that community develop,” Ray said. “And we’re really excited to replicate that in Evanston as well.”