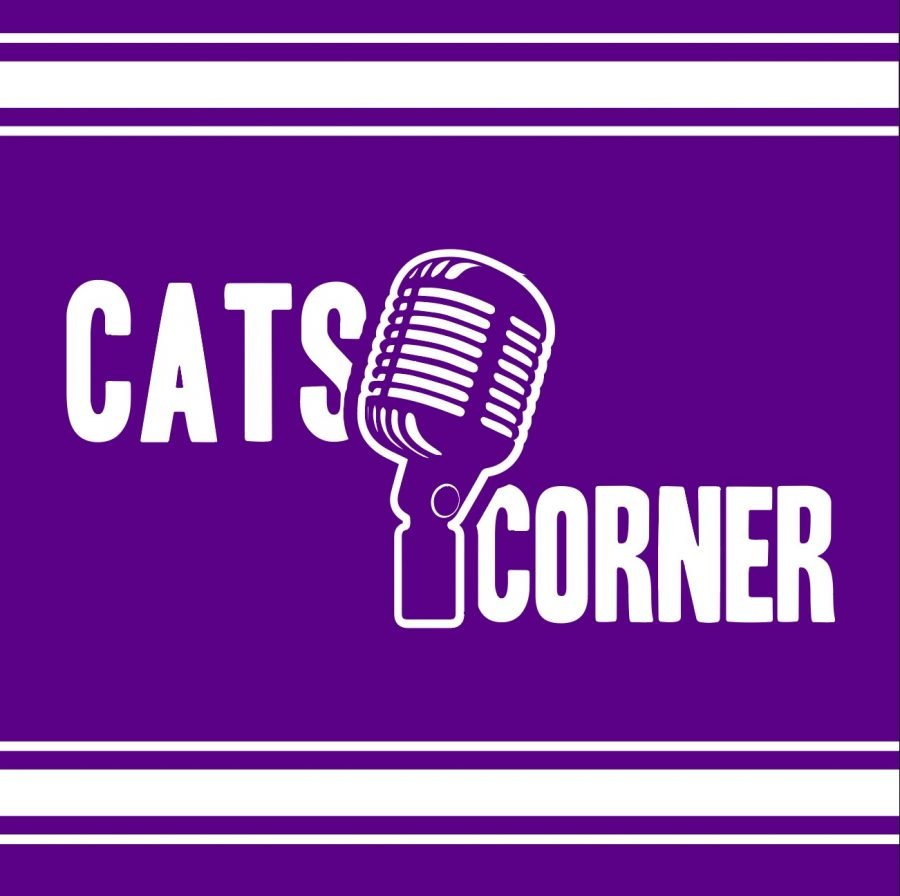 Unsung Heroes returns for a new episode on Cats Corner. We’ll hear from individuals involved in Northwestern athletics whom you may not see in many articles, nor on the field, court or track, but definitely make an impact on the team’s success. In this episode, we catch up with Kathryn Dillin, the assistant director of marketing for Northwestern athletics, to hear more about her role in Northwestern sports and the impact she has made on the people around her.

LAWRENCE PRICE: Back in the spring, I provided a glimpse into the world of star players in Northwestern athletics that don’t receive the star title, sitting down with football’s director of player development Darby Dunnagan. Now, I’m back to show a little bit more love on my Cats Corner series called Unsung Heroes, highlighting those inside Northwestern athletics making it happen for the Cats behind the scenes.

LAWRENCE PRICE: Our second hero without a crown is athletics’s assistant director of marketing Kathryn Dillin. From The Daily Northwestern, I’m Lawrence Price. This is Cats Corner, a podcast that gives you an inside look into Northwestern sports, both on the field and in the locker room.

LAWRENCE PRICE: Do you hear the fans cheering? The excitement in their escalating and high-pitched voices? The buzzing atmosphere that you wish you were a part of? Well, that’s the sound of the many men’s soccer games at Martin Stadium this fall, as the Cats scored one of their many goals of the season. But in order for the fans to come, for the night lights to turn on, for the scoreboard to work, a lot of steps had to be made to allow NU to play its eight home games this season. Kathryn and her team, whose responsibilities included managing marketing for men’s soccer, made it happen.

LAWRENCE PRICE: Before putting on and managing both of these hats, Kathryn wasn’t sure what type of hat to even put on. After losing everything to the housing crisis during her junior year of high school, Kathryn started at Wake Forest University as a first-generation college student, thinking she would study to be a pediatrician to help her family. However, she quickly learned that the subject wasn’t for her and decided to explore different options on campus.

KATHRYN DILLIN: What ended up happening was, I used my gen-eds as an opportunity to kind of figure out what I really loved and what I was passionate about. And so, my love for understanding why people behave in the ways that they do kind of drove me toward the marketing realm, whereas my love for sports kind of drove me specifically to the sports industry. Why do they purchase what they purchase? Why do they go to the sporting event that they do and why did they come back, right?

LAWRENCE PRICE: Using her high school experiences in DECA marketing club, running track and capturing football photos for the yearbook, Kathryn added her previous passions to her growing curiosity and ran with it. This included shadowing a person in the sports communications department at Wake Forest during a sophomore year football game during college, eventually segueing her into the business she works in today.

KATHRYN DILLIN: I came back my junior year and I said, “Hey, I’ll take anything. Do you have internships, unpaid, volunteer stuff? Like, anything you want. I will be the press runner, like, I will run the box scores to people in the press box. I don’t care.” He said, “No.” And I was like, “Oh my gosh.” But he was like, “Marketing might have something,” and I had no idea what the difference is.

LAWRENCE PRICE: Hopping off her 13-hour flight from Chile after studying abroad, Kathryn went straight to her marketing interview and secured the internship, proceeding to work there for two years under Wake Forest Sports Marketing, officially beginning her professional journey.

LAWRENCE PRICE: After graduating and leaving the Demon Deacons, in her first year out Kathryn became the marketing coordinator for the University of Minnesota’s athletics department, overseeing five different sports ranging from women’s rowing to men’s gymnastics. One of the five included women’s ice hockey, where she was able to lead the program from a marketing standpoint during the team’s seventh national championship run.

KATHRYN DILLIN: Every place I’ve been at has given me a unique experience and kind of additional information to help me or additional knowledge to help me in the industry, right, and it’s developed my understanding of what I do as a professional and how I do it and the resources that I have. I learned things at Minnesota that I took with me, you know, the rest of my career in terms of, you know, crisis management and PR.

LAWRENCE PRICE: In addition to showcasing her versatility during games, Kathryn kept the same energy off the field. Collaborating with the baseball program, she tied her love for dogs and sports to coordinate the first-ever Pups at the Park event in the Minnesota baseball stadium. She took it a step further at her next destination, leaving the cold weather after a year to head back to the warm temperatures, becoming a graduate assistant for marketing with Auburn University athletics. There, she jump-started an idea that began as a joke with one of her co-workers to the nation’s first all-inclusive pets club within intercollegiate athletics: Paws & Claws.

KATHRYN DILLIN: I thought back to it. I was like, wait, this is actually kind of a good idea, I might propose this. And so I drew up a proposal, and they loved it. And I was able to see that come to life over, you know, an eight-, nine-month timeframe of planning and executing and launching it. And it was wildly successful in my first year, which I’m incredibly grateful for, you know, fans actually taking an interest in something that we were presenting them.

LAWRENCE PRICE: Kathryn’s work was so impressive that it helped Auburn athletics win a 2018 Gold National Association of Collegiate Directors of Athletics “Best Of” Award, alongside a top-three finish for 2018 NACMA Marketing Team of the Year. However, her resume as a Tiger didn’t end there, as she oversaw marketing for four more sports. She set up cornhole and bouncy houses for equestrian meets, for example, and prepared for the weekend softball series.

HEATHER VAN HOEGARDEN OBERING: I’ve worked with amazing people throughout my time at Northwestern, both in the marketing department, on campus with the University and also just in our athletics department, and Kathryn is one of those people. We’ve had people that have cared tremendously about this place, have worked incredibly hard to advance the mission and goals of the University, the department and our student athletes, and Kathryn is no different from those folks.

LAWRENCE PRICE: As the associate athletic director for marketing and leader of the four-person marketing team, Heather Van Hoegarden Obering hired Kathryn in July 2018. She emphasized Kathryn’s importance to the team and how she complements her fellow assistants in Adrienne Green and Andrew Cass, specializing in making wicked spreadsheets. Heather was so impressed that when Kathryn was unsure if she should run for this year’s marketing representative, Heather pushed her to apply, and she won the leadership position.

HEATHER VAN HOEGARDEN OBERING: Anytime you have talented colleagues, you want them to grow professionally, and so anytime they have an opportunity to grow professionally, you want to be supportive of that. And that’s really all that was for me was, you know, just explaining to her that, “Hey, I think there’s a good opportunity. If you want to do it, you should do it. You can do it. You’re completely capable and competent and will do really well in it.” She has a tremendous work ethic. She cares a lot about this place in her position, and she has a terrific skill set.

LAWRENCE PRICE: Kathryn said the job requires tons of work nights and weekends, on top of the regular 40-hour week — including missed holidays — making it especially hard to get out of bed after a football gameday. Medill senior Matt Shelton, an intern in the athletics marketing department, knows this all too well after nearly working a 3 p.m. to 12 a.m. shift for one of this year’s football games. Matt said even through this tough work, Kathryn and her team make him feel comfortable and help him develop his own skills.

MATT SHELTON: There are various different parts of what goes into college marketing that they’ve definitely helped me out with and helped me to learn. Kathryn specifically has walked me through plenty of stuff, whether it’s, like, writing scripts, writing ad reads, helping run on-field promotions like Wildcat Alley football games. There’s a ton of work that goes into putting on this level of athletic events, and they do such a great job, and it was awesome for them to kind of show me the ropes for the little pieces that I was in charge of, and it’s been an awesome learning experience.

LAWRENCE PRICE: A floating intern, Matt acts as a jack-of-all-trades for the department, from helping prepare giveaways to even updating rosters or creating credentials. Working to earn his integrated marketing communications certificate, Matt applied for the internship before the school year. The application process included multiple interviews, and the first two were conducted by Kathryn.

MATT SHELTON: It was a really cool opportunity, and Kathryn was very helpful and very flexible with letting me do it while I still have a full course load and with all the extracurriculars and work that I do. She’s incredibly flexible and incredibly helpful with my schedule and still helps me be part of the great work that they’re doing. It’s a crazy talented staff over there, and I’m just proud to play my small role in it.

LAWRENCE PRICE: Loving the work that she does, Kathryn finally got to return home last Thanksgiving for a full week, the first time in her nine seasons of athletics marketing. Her mind is still blown away at the opportunities afforded to her currently after thinking back to her senior year of college, where she worked four jobs. Now, as the overseer for men’s and women’s soccer, women’s basketball, women’s tennis and softball, she focuses on making games run smoothly and making sure the fans have a good time.