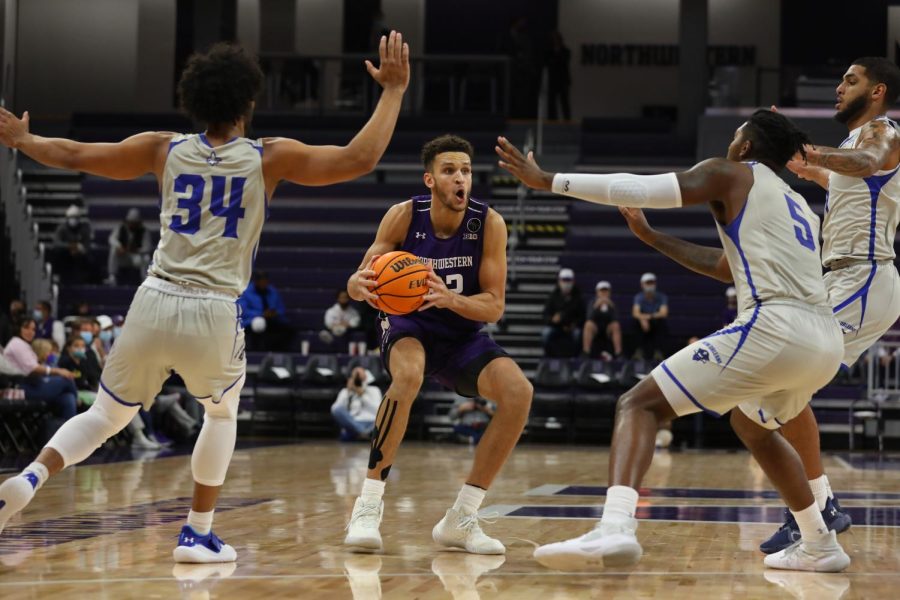 Senior forward Pete Nance looks to pass in the Wildcats’ contest against New Orleans. Nance had 17 points and 10 rebounds against Maryland in Northwestern’s 67-61 win over Maryland.

Playing in their first and only Big Ten matchup before the start of the new year, the Wildcats (6-2, 1-0 Big Ten) used lockdown defense and late-game heroics by senior forward Pete Nance to down Maryland (5-4, 0-1 Big Ten) 67-61 in a rowdy Xfinity Center. Nance notched his third double-double of the season with 17 points and 10 rebounds, while the Terrapins shot just 28 percent from the field.

After purging longtime coach Mark Turgeon on Friday, Maryland’s new era under former Wake Forest coach and current interim Danny Manning started off with a whimper on the offensive end. The Terrapins converted just two of their first 12 field goals — including an early scoring drought of over four minutes — while NU took to the paint to boost its early lead.

Maryland battled back into the contest, using a three-pointer by guard Hakim Hart to even the score at 18 with eight minutes left in the half. A back-and-forth first half culminated in a 6-0 run by the Cats — coupled with a rash of Terrapin turnovers — to give NU a 30-27 lead going into the break.

The Cats continued their strong showing into the second half. Maryland regained its lead on a three-pointer by forward Donta Scott, only for its offense to go ice-cold again. The Terrapins missed their next 10 shots from the field, and NU took advantage. Three-pointers by sophomore guard Ty Berry and grad transfer forward Elyjah Williams, along with a pair of jumpers from junior guard Chase Audige in his season debut, helped boost the Cats to an eight-point lead.

Maryland stopped NU’s streak with baskets on back-to-back possessions, but senior forward Pete Nance answered with a mid-range jumper to spark a 6-0 run for the Cats.

But NU struggled to put the game away. The Cats missed their next eight shot attempts and allowed their hosts to cut the deficit to a single point with just over four minutes left. Maryland’s Fatts Russell missed a potentially game-tying three-pointer on the Terrapins’ next possession, and Maryland squandered its next opportunity with a missed layup.

Then, Nance took over. The senior from Akron, Ohio bullied the Terrapins in the post for a basket, tapped an errant Maryland shot to a teammate and tacked on another score down low to give the Cats a seven-point margin with two minutes left. Audige added another basket on NU’s next possession. Maryland registered just one field goal in the final four minutes.

NU will finish out its December with a string of four home contests, but will not return to Big Ten play until Jan. 2 against Michigan State.

1. Chase Audige returns to the court… and the starting five
The most significant development on Sunday was the return of junior guard Chase Audige, the Cats’ leading scorer in the 2020-21 season. Audige had missed NU’s first seven games with a hip injury, but looked fully healthy in his 2021-22 debut. The former William & Mary guard made a crisp cut to the basket and drove in for an uncontested dunk and his first points of the season. Later in the half, Audige made a clean block, charged down the floor and scored on a physical lay-in in the paint. NU’s most penalized player in 2020-21 also proved to be in midseason form in that regard as well, picking up three fouls and taking only 15 minutes of regulation to get called for his first technical. Audige finished the afternoon with 14 points and four rebounds in 26 minutes of action.

2. Cats contend in Big Ten opener behind stingy defense
NU came to College Park, Md. with a superior record to the host Terps, but the Cats couldn’t knock off Providence or Wake Forest, their toughest early tests. Against a Maryland team that boasts an NCAA Tournament win and a Big Ten regular season title in the past two seasons, NU held the Terrapins scoreless for four-minute stretches in both halves, forced Maryland into 14 turnovers, and allowed just 10 points in the paint. And when the Terrapins nearly took control, NU answered and wasn’t afraid to take big-time shots, whether from Nance in the post or Audige beyond the arc.

3. NU’s unforced errors don’t come back to bite them
Coach Chris Collins has to be thrilled with the result, but the Cats will need a cleaner effort in their Big Ten home debut against Michigan State. NU had multiple promising drives to the basket end in confounding misses, and the Cats’ ball security issues were only obscured by the Terrapins’ own penchant for turnovers. Four games against non-Power Five opponents should provide the runway for Collins to correct the course.