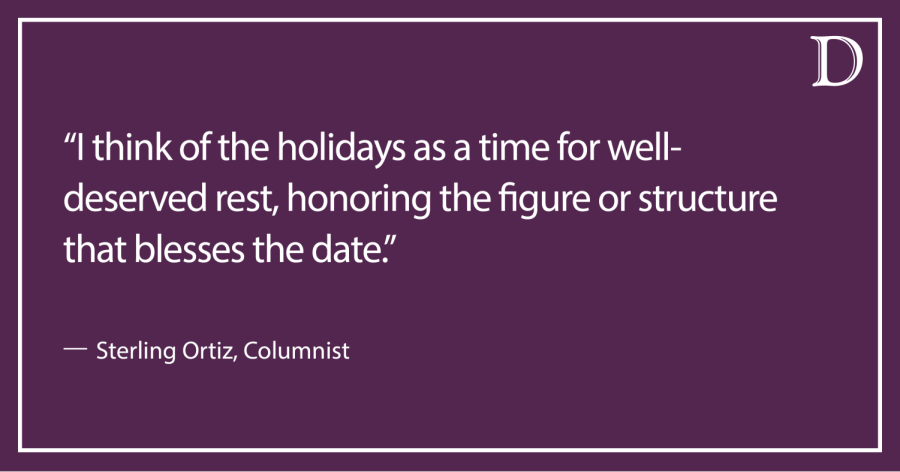 Being a Northwestern student, in most cases, is an exercise in pain.

We work ourselves to the bone by taking complex, intellectually challenging classes with our only long-term reprieves coming during university holidays and mid-quarter breaks. While I personally relish these challenges, I also recognize that this pain, related to responsibilities, persists in the American working life. To solve this, America should add more federal holidays.

While mental health days are good, they are devoid of the deeper meaning and honor that holidays have. Not only do Americans deserve more holidays, but they also deserve improvements on the meanings of existing holidays to promote civic education.

I think of holidays as a time for well-deserved rest, honoring the figure or structure that blesses the date. Americans deserve more rest for two reasons. First, according to the Financial Times, countries with fewer working hours tend to be more productive. This is because all workers have a productive ceiling, and squeezing more work out of exhausted laborers yields few to no quality outcomes.

Americans work almost 1,800 hours a year, which is about 500 more hours a year than Germans. If Germany and other European countries, historically seen on the same level or above Americans in social status, can provide free time for their workers, why can’t the U.S.? This amount of work is excessive, and Americans deserve to work less.

Second, all people deserve more time to spend with friends and family, and all people should enjoy the fruits of their labor. This argument cannot be quantified as easily as production can, but I argue this humanitarian case is just as important. Humans do not solely live to work; humans should work and live and enjoy the whole of life.

To add more holidays, I have a few non-exhaustive ideas. As a proud Magyar, I would strongly advocate for a day celebrating Dr. Katalin Karikó. She is a living saint, one of the creators of mRNA vaccines and today is the senior vice president of BioNTech. Karikó works with the company that worked with Pfizer to create one of the most effective COVID-19 vaccines.

As for revising current holidays, I again invite people to think of which holidays matter for them. For myself, I have three urgent changes in mind. First, all federal holidays should be paid holidays, and businesses should be encouraged to recognize them if not mandated by law.

Second, Labor Day should be moved to May 1, following the internationally recognized Labour Day. The largest union conglomerate in the country, the American Federation of Labor and Congress of Industrial Organizations, already celebrates May 1 as International Workers’ Day.

May 1 came into international prominence resulting from the Haymarket Affair in Chicago, in which brave workers risked death to march for a novel eight-hour work week. Moving Labor Day to May 1 would show proper respect for the American labor tradition and the historical courage of American workers.

In addition, the American government at all levels should rename Columbus Day. I advocate for this renaming as a proud European, because I think the current Columbus Day is disrespectful to Italians.

Columbus was diametrically opposed to modern Italians, both by his deeds and by the fact that he hailed from Genoa, a city-state far inside Northern Italy. He was a torturous fiend who beat and disfigured Native Americans instead of showing deserved respect, to the extent that it landed him in jail after his third voyage.

No American should view Columbus as anything except a disgrace. Indigenous Peoples Day, which was formed to celebrate Native Americans and denounce Columbus, should stay, and Columbus Day itself should be renamed.

I would create the Giorno Dei Due Garibaldini, a new holiday honoring the Italian power couple of Anita and Giuseppe Garibaldi. This holiday would celebrate the life and legacies of these heroes who fought for Italian unification and defended the independence of Latin American countries. This spirit, in my eyes, is an excellent choice to honor Italians in the U.S.

Sterling Ortiz is a SESP fourth-year. You can contact him at [email protected]. If you would like to respond publicly to this op-ed, send a Letter to the Editor to [email protected]. The views expressed in this piece do not necessarily reflect the views of all staff members of The Daily Northwestern.