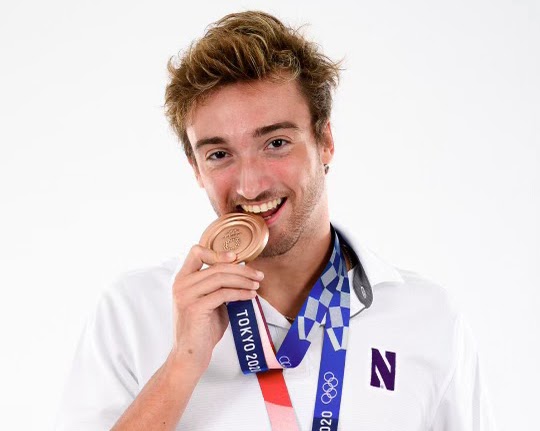 Federico Burdisso bites one of his two Olympic bronze medals. Burdisso finished 0.07 seconds ahead of the fourth place swimmer in the 200m fly to make the podium.

Ask anyone in the swimming world about Northwestern junior and Olympic medalist Federico Burdisso, and they’ll mention his coolness under pressure.

“A lot of athletes have a hard time because of the pressure, COVID rules or that no one could watch,” he said. “(For) Federico, it’s about being competitive.”

“About expectation or pressure … it gets pretty intense,” Robinson said. “(He does) a great job of handling that.”

“He has no mental limits,” Palombi said. “He thinks he can do everything. That’s his power.”

And yet, surrounding the most crucial races of his life at this year’s Olympic Games in Tokyo, Burdisso hit a psychological wall in addition to the pool walls. Having completed three events and won two medals in less than a week, emotional fatigue was setting in.

“I’m not really a stressed guy. I don’t get anxiety, but I felt it there, definitely,” Burdisso said. “I didn’t leave those Olympic Games with good feelings.”

Alessandro and Federico were born in Pavia, Italy, located 20 miles south of Milan. It wasn’t long before the brothers took to the water — Alessandro remembered they started swimming around ages 3 and 2, respectively.

“We had a summer house near the sea, and my mom didn’t really want to pay attention to us every time,” Alessandro said. “From there, it just went up and up.”

“Up and up” came rapidly. After their first competitions about six years later, the brothers continued to train side by side. Federico began his career as a freestyler, and his butterfly results caught up as years passed.

When Robinson first met Federico years later, he was exceptional in both strokes — but what really set him apart, she said, was his prowess as a “world-class flyer.”

Federico realized this, too.

“Practices in fly are just much better than practicing freestyle, and I enjoy them more,” Federico said. “But fly is hard. In a race, 200 fly, it kills me. Sometimes I wish I was doing freestyle.”

As his fitness improved, Federico’s 200-meter fly times progressed like never before. At the 2017 European Junior Swimming Championships in Netanya, Israel, he shaved more than four seconds off the time he had posted at the Italian National Championships only two months prior. Burdisso, only 15 at the time, swam a then-personal-best 1:57.83 to earn a silver medal behind Hungary’s Kristóf Milák.

Coaches noticed. Burdisso would go on to win the 4×100-meter medley relay before leaving Netanya, helping Italy to a new junior world record.

Federico had always wanted to study in the U.S. Shortly after Netanya, he and Alessandro transferred to Mount Kelly School in the United Kingdom to hone their English to a level sufficient to attend American universities. The boarding school was a transitional opportunity for the Burdissos’ academics, but it also had a 50-meter pool and a renowned swimming program with an Olympic pedigree.

Meanwhile, the accolades kept coming. After a six-medal haul (including two golds) at the 2017 European Youth Olympic Festival, Burdisso took his talents farther abroad, winning medals in Edinburgh, Scotland; Geneva and Indianapolis over the next year.

In the summer of 2018, Stefano Burdisso, Federico’s father, contacted Palombi to coach his son. Palombi’s coaching program started unusually — he sent part of Federico’s training regimen at a distance for Federico to complete alone.

“At the beginning, I didn’t think that I could train Federico (that way),” Palombi said. “It was very strange for a young swimmer.”

Federico then began training with the rest of Palombi’s team. Palombi helped the young swimmer with his technique and race mindset, establishing a “mental network” between the two. It worked — he won bronze at the European Aquatics Championships two months later.

Shortly after, Federico caught Robinson’s attention. With the Youth Olympic Games in Buenos Aires approaching, Robinson was attending to coach a different athlete, but she too had been in touch with Stefano. She watched as Federico secured three medals in three days.

“He didn’t know me then, so he was really reserved and very respectful,” Robinson said. “He was looking forward to the opportunity to both compete at a high level and attend a great academic institution.”

Federico amassed a slew of honors over the next 18 months.

He took the 200 fly at the 2019 Italian National Championships, set school records in the 200 fly and 200 free and became the first Wildcat since 2015 to be named Big Ten Swimmer of the Week — twice.

“(He’s) like a Ferrari,” Palombi said. “Always gives everything to win.”

When the pandemic halted competitions for eight months, Federico decided to remain in Italy with the national team. Even though he was training without Alessandro and Robinson, Federico could work on long course technique (NCAA competition uses 25-yard pools, less than half of Olympic-sized pools) and relay transitions with his longtime Italian teammates. Federico competed in short course events at first, but he convinced coaches to initiate long course training four days a week, including Sundays.

Present or not, Palombi could still coach Federico on his mentality.

“He has lots of quotes and phrases that make you think about life and the state of calm and peace,” Federico said. “(Like) Bruce Lee, visualization.”

According to Palombi, Federico, a statistics major and mathematics minor, concentrates better when he studies. Palombi, who himself has an economics degree, said Federico is “bored and more difficult to train” if he isn’t mentally engaged.

Although Federico considers himself somewhat introverted, he said racing without spectators was an adjustment.

“Some people don’t like the public; they want to focus,” Federico said. “But without the public, there’s nothing to do.”

The road to Tokyo

With the Olympic Games on the horizon, Federico was laser-focused, and he paused his freestyle training entirely. He defended his 200 fly national title and finished runner-up in the 100 fly, qualifying for the Olympics in both events. He added two medals at the European Championships in Budapest, Hungary, before flying to Tokyo.

Federico survived the 200 fly heats and semifinals, finishing seventh and fourth to reach the medal race. According to Robinson, Federico’s goal for Tokyo was just to make the final, aiming for a medal in 2024.

Federico started the final strong, finishing the first 100 meters only one-tenth of a second behind the leader.

“That’s one of his strengths: he was out pretty quick with the rest of the field,” Robinson said. “One of the things he’s gotten better at is maintaining that power and speed throughout the entirety of the race.”

Federico reached the 150-meter mark in second place. He had enough energy to hold on for the bronze medal behind Milák, the same swimmer who bested him in Netanya and many times since, and Japan’s Tomoru Honda. Federico became the first athlete to win an Olympic medal while enrolled at NU since 1956.

The atmosphere was unsettling for Federico, and pandemic-related restrictions in the Olympic Village did not make for easy adjustments. Even after he picked up a second bronze in the 4×100-meter medley relay, he felt exhaustion “more than feeling good.”

“We couldn’t go out from the village; we couldn’t see other sports,” Burdisso said. “After our last race, we had 48 hours to go back … it was really stressful.”

Federico returned to NU struggling to find motivation in smaller events. He took a monthlong hiatus, resumed his freestyle efforts and recovered for the NCAA season. Recently, he helped break a 14-year-old school relay record at the Purdue Invitational.

Robinson, who acknowledges Federico may not be back “at the top of his game” yet, is not concerned with his post-Olympic progress. For her, results in February and March —  championship season — are more important.

Four months removed from Tokyo, Federico Burdisso is largely the same person. Even after being recognized at an NU football game, he rarely boasts about his achievements.