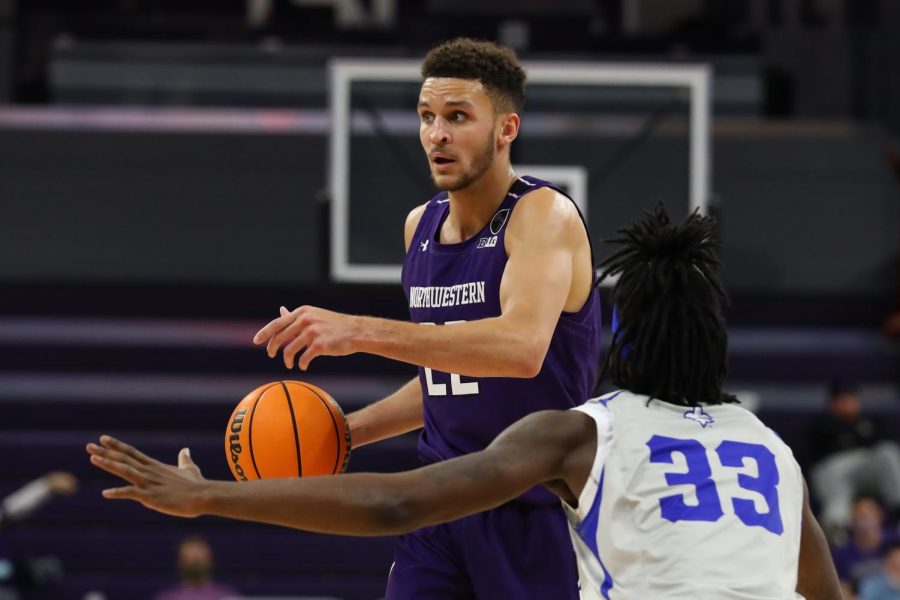 Senior forward Pete Nance attempts to direct traffic on offense against New Orleans. Nance had 15 points in the 77-73 loss against Wake Forest.

With conference play looming, Northwestern headed to Winston-Salem, NC on Tuesday in search of a statement win against Wake Forest in the annual Big Ten/ACC Challenge.

The Demon Deacons (7-1) jumped out to an early 13-7 lead in the opening minutes after knocking down several open 3-pointers. The Wildcats (5-2, 0-0 Big Ten) converted their first two shots from the field, but were 2-of-11 before the under-16 timeout. Senior forward Pete Nance struggled early on to convert opportunities around the rim, starting off 1-of-5 from the field.

After climbing back into the game, NU was the benefactor of a Wake Forest technical foul, with the Cats recapturing the lead behind a pair of Ryan Greer free throws.

However, just as quickly as they clawed back, the lead evaporated. From the under-8 to the under-4 timeout, the Demon Deacons went on a 13-0 run highlighted by Wake Forest 3-pointers and missed NU layups.

But basketball is a game of runs and the Cats closed the half on a 10-3 run to cut the Wake Forest lead to five, with a halftime tally of 37-32. Graduate student forward Elyjah Williams led all NU scorers with six points. Nance went into the break with a 2-for-8 shooting mark, five points and two fouls in an uncharacteristic early performance.

The Cats’ offense came out firing in the second half, snagging a 40-39 lead in the opening 100 seconds. But in what became the story of the game, Wake Forest roared back behind their own 90-second scoring run, taking a 47-40 lead that forced coach Chris Collins to call a timeout at the 15:43 mark.

NU battled back to tie the game up midway through the half. The Cats’ intensity on both ends of the floor picked up too. As they forced four early turnovers and held Wake Forest to just 2-for-6 shooting from distance after a prolific 3-point barrage from the Demon Deacons in the first half. On the offensive end, Williams and sophomore guard Ty Berry shouldered much of the load, combining for 10 points by the 9-minute mark.

The teams traded buckets for the rest of their half, with Nance bringing the score level at 60 with just over four minutes remaining. As is the case in Collins’ offensive system, and despite his poor shooting night — 6-for-19 from the field — the ball went to Nance nearly every possession as the minutes dwindled.

And after countless scoring runs, it was only fitting that neither team scored a bucket in the final two and a half minutes of regulation. The game headed into overtime with a score of 64-64.

The overtime period opened slowly, with NU living at the free throw line. The Cats held a 69-67 advantage at the 2:11 mark, thanks to junior guard Boo Buie’s perfect 4-for-4 shooting from the charity stripe — Williams had hit one of his two attempts as well. First-year guard Julian Roper II helped NU reclaim a one-point lead with 90 seconds to play after, you guessed it, a pair of free throws.

A Nacne-Buie give-and-go ended in a layup that tied the game at 73 as Wake Forest coach Steve Forbes called timeout with 13.8 seconds left. Out of the break, Demon Deacons guard Jake LaRavia buried a fadeaway jumper to give Wake the lead 75-73 with 4.7 seconds remaining.

However, the success at the free throw line was all for naught, as a Buie turnover off the inbound allowed LaRavia to steal the ball, before he nailed a pair of free throws to confirm a 77-73 Wake Forest win.

1. Northwestern perimeter defense struggles in first half
After holding the Georgia Bulldogs to 20.8% shooting from beyond the arc in their last game, Northwestern’s perimeter defense struggled early against the Demon Deacons. The quick ball movement from Wake Forest led to several late rotations from the Cats, and as a result, open 3-pointers. Wake Forest shot 8-for-16 from distance in the first half, with three players each making a pair of 3s. However, the Demon Deacons cooled off in the second half, going 2-for-9 from distance. The second-half effort exhibited the Cats’ ability to defend on the perimeter, but the almost Jekyll and Hyde nature of defending is a point of concern as December basketball nears.

2. Balanced offensive effort highlights NU’s depth
Collins has said from the start of the season that every player in the 9-man rotation can expect to play around 20 minutes a game. Such was the case tonight with every player registering at least 16 minutes of action. Of every Wildcat, only freshman guard Casey Simmons went scoreless, as six players recorded at least seven points. Nance wasn’t exactly efficient but he led the way with 15 points. Still, the box score shows us that Collins has a number of players who can pick up the slack if Nance or junior guard Boo Buie are struggling.

3. The Cats’ bench shines
After the slow start from the starters, the Northwestern bench was a bright spot in an inconsistent opening half. Coach Chris Collins has said that every player can expect to play around 20 minutes — and the Cats’ bench took full advantage. The quartet of Williams, senior guard Ryan Greer, redshirt junior center Ryan Young and Roper II each posted a positive +/- of at least three in the first half. The bench also nearly outscored the starters with a tally of 17-15. To achieve success in what will be a competitive conference season, NU will need similar bench production on both ends of the floor.