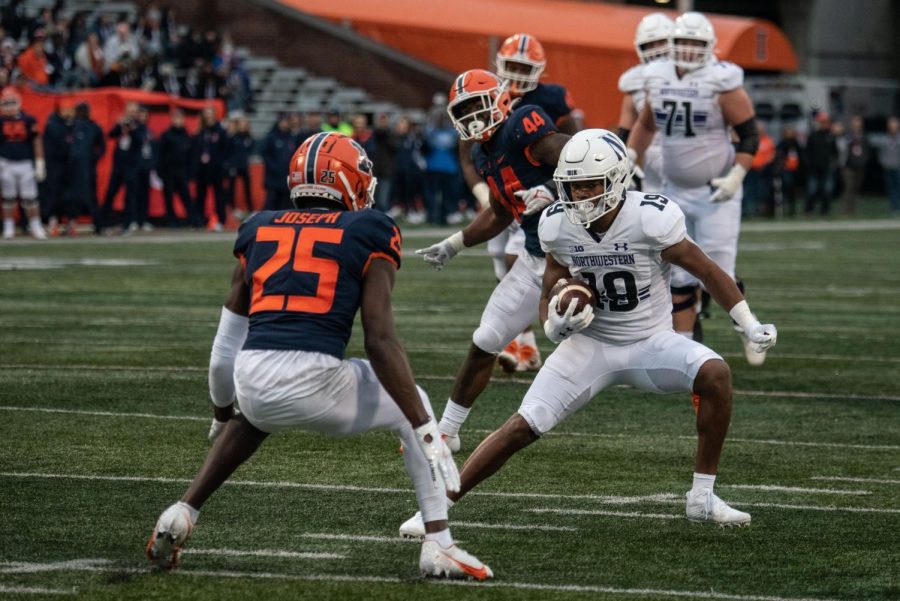 CHAMPAIGN, ILL. — Through Northwestern’s dubious stretch of blowouts to Big Ten rivals this season, one silver lining remained — sole possession of the Land of Lincoln Trophy, the prize of the Land of Lincoln rivalry. The Wildcats entered Saturday’s afternoon game against Champaign having won six straight against Illinois, but in search of their first Big Ten West win of the season.

Instead, NU faithful endured one last gut punch to punctuate the 2021 season, a 47-14 loss at the hands of their archrivals. Illinois (5-7, 4-5 Big Ten) scored 37 points in the first half to race out to a 30-point halftime lead, and the Cats (3-9, 1-8 Big Ten) never found their offensive footing in a sixth straight defeat.

The 115th game between the two Illinois rivals — and the 13th and 14th ranked scoring teams in the Big Ten — predictably started as a defensive battle. Illinois punted after its first two drives, and NU couldn’t get anything going behind starting quarterback Andrew Marty.

The game turned on Marty’s second drive. In an apparent passing attempt, Marty instead fumbled the ball and Illinois took possession at the Cats’ nine yard line. The Fighting Illini punched an 8-yard rushing touchdown on their first offensive play, then added to their lead with a 39-yard touchdown toss by quarterback Brandon Peters to receiver Isaiah Williams on their next offensive drive.

Barker’s touchdown to open scoring marked the first of seven consecutive Illinois scoring drives to close out the first half. Peters torched the Cats’ secondary to the tune of 199 first-half passing yards, while Fighting Illini running back Chase Brown broke tackles and kept NU honest on the ground by rushing for 112 yards and a touchdown. Sophomore linebacker Bryce Gallagher was knocked out of the game with an upper body injury in the second quarter.

The Cats’ offense did not fare much better over the rest of the half. Coach Pat Fitzgerald benched Marty in favor of sophomore Ryan Hilinski after three drives, and while Hilinski managed to drive the offense downfield, the Illinois defense held the unit scoreless until 4:24 left in the second quarter. Hilinski made his share of mistakes as well, starting off one drive with a self-inflicted stumble-turned-sack and an interception on a deep pass up the middle.

Any hope for an NU comeback dimmed after a third quarter in which the Cats accumulated just seven yards across four drives, while Illinois kicker James McCourt tacked on a 49-yarder to boost the Fighting Illini above the 40-point threshold.

Hull, who finished with 101 yards and more than 1,000 on the season, added a one-yard touchdown with 24 seconds remaining.

1. The Wildcats’ 2021 quarterback carousel concludes with another rough showing
Fitzgerald’s switch to Ryan Hilinski in the first quarter marked the Cats’ eighth change to their starting quarterback position this season. Since Fitzgerald named Hunter Johnson as NU’s starter ahead of the Cats’ Week 1 contest against Michigan State, the quarterback position has been anything but settled. Hilinski took over after Marty had more fumbles (two) than completions (zero), and he finished out the game as NU’s starter. Fitzgerald’s move made sense given Marty and Johnson’s standing as seniors and Hilinski’s status as a sophomore, but the Cats would be wise to explore their options in the transfer portal this offseason. Change is coming under center.

2. Northwestern’s passing defense struggles to stop Peters
Purdue dominated one-on-one matchups in Wrigley Field last Saturday, and the NU secondary’s slump continued south to Champaign. Peters found Isaiah Williams for 25 yards on the first play of scrimmage, then reconnected with Williams for a 39-yard touchdown a couple drives later. Another Illinois touchdown drive saw Peters throw deep on NU for a 56-yard completion to Casey Washington, the Cats’ sixth completion of over 35 yards surrendered in the past two weeks alone. Peters finished the day with 242 passing yards and a touchdown and a third quarter interception, while Williams lit up the scoreboard with 113 receiving yards and a pair of scores.

3. Wildcats look to the future after dismal 2021
NU’s season finale was a fitting ending to a season the Cats would like to forget. Fitzgerald and his NU squad have questions on all three sides of the ball. Among them: an offense that ranked worst in the Big Ten, a defense that fell off precipitously from its 2020 heights under first year defensive coordinator Jim O’Neil and a special teams unit that seemed reluctant to send out senior kicker Charlie Kuhbander by year’s end. Fitzgerald is pointing out the Cats’ trend of success in even years as reason for optimism, but it will take considerable work this spring and summer — and introspection by the coaching staff — to return NU to Big Ten contention next season.