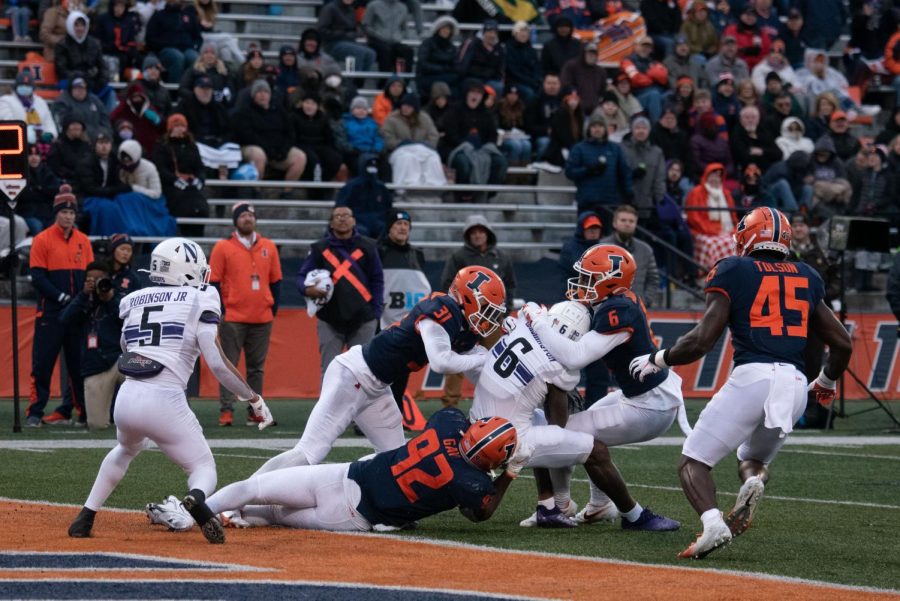 Malik Washington is tackled by Illinois defenders. The Northwestern junior wide receiver reeled in seven catches for 83 yards in the Wildcats' 47-14 loss to Illinois.

Tony Adams was the first player to touch the Land of Lincoln Trophy.

After receiving Illinois’ newest piece of hardware, the Fighting Illini defensive back ran to his right, with numerous teammates in near lockstep with him.

Soon, they all reached one of Memorial Stadium’s end zones. At least four Illinois players put a hand on the Land of Lincoln Trophy as it was lifted towards the night sky.

Meanwhile, Northwestern headed towards the locker room. As the Fighting Illini (5-7, 4-5 Big Ten) celebrated their first victory over the Wildcats in seven years, NU (3-9, 1-8) left the field for the final time in 2021 following a 47-14 loss that gave the squad its second three-win season in three years.

“We got to start from the ground up,” coach Pat Fitzgerald said. “We got to get stronger. We got to get our edge back. We got to get our grip back and our toughness because that’s been the hallmark of my time here. We’ve been a really tough, gritty, blue-collar group that demonstrates a great attitude and fights your tail off.”

Just under 11 months ago in Orlando, the Cats completed one of the best seasons in program history. A Citrus Bowl win over Auburn polished off a campaign that included seven wins and a visit to the Big Ten Championship Game — a contest in which NU led national championship runner-up Ohio State at halftime.

Tonight, the Cats locked in their spot at the bottom of the Big Ten West, with no division wins on their resume. Rotating starting quarterbacks and a struggling defense under first-year coordinator Jim O’Neil were issues that affected NU throughout the season and were on display against Illinois in Champaign.

The Fighting Illini, holders of the conference’s worst passing offense ahead of this weekend, found success through the air as quarterback Brandon Peters threw for 242 yards, one touchdown and an interception. Meanwhile, senior quarterback Andrew Marty was replaced by sophomore Ryan Hilinski in the first quarter, who proceeded to throw for 123 yards and an interception.

A rushing attack led by running back Chase Brown earned 217 yards on the ground, giving Illinois 459 yards of offense. It marked the eighth time the Cats gave up 400 or more yards of offense this season.

“We’ll get back to it really soon,” Hilinski said,” because we don’t want this to ever happen again.”

NU’s first miscue occurred on its second drive of the game. Marty prepared to release a pass, but the ball slipped out of his hands and hit the turf. Fighting Illini linebacker Isaiah Gay then recovered the turnover and Illinois tight end Daniel Barker opened the scoring with an eight-yard run on the ensuing play.

During the following possession, the Cats punted after Marty recovered his own fumble. It took only one play before Peters connected with Isaiah Williams for a 39-yard touchdown to extend Illinois’ lead to 14-0.

With Marty having completed zero passes and rushed for -11 yards, Fitzgerald made the switch to Hilinski, marking the fourth time in the last five games both quarterbacks took the field. The South Carolina transfer led NU to the Fighting Illini 24-yard line, but his fourth-down pass to graduate wide receiver Stephon Robinson Jr. fell incomplete.

“We turned the ball over early, gave up explosive plays and had opportunities to get off the field,” Fitzgerald said. “Today was kind of a microcosm of our season.”

Hilinski was then intercepted by Fighting Illini defensive back Jartavius Martin. The miscue turned into points courtesy of a 21-yard touchdown run from Williams, who finished with 113 receiving yards.

Even though he connected with three receivers on passes of 10 yards or more en route to a one-yard touchdown run, Hilinski’s scoring march only cut the deficit for a short time. At halftime, Illinois led 37-7 and racked up 334 yards of offense.

The Fighting Illini’s performance in the second half included its only turnover of the game and just one more touchdown. But it was enough to hold off their in-state rival, who previously won six games in a row against them, largely thanks to eight consecutive scoring drives.

Fitzgerald laid out his plans for NU to bounce back in 2022. Finding consistency in all aspects of the game and schematically analyzing areas where the team struggled and positional depth are goals, as well as returning to the “championship standard.”

Fitzgerald proclaimed that “this type of record will never happen again” on Nov. 30, 2019 after finishing 3-9. Nearly two years later, the Cats are in a similar position to where they were that day in Champaign.

Yet there are reasons for optimism. NU has been to two of the past four conference championship games. Players such as sophomore running back Evan Hull — who rushed for 101 yards and a touchdown against Illinois — return.

For graduate linebacker Chris Bergin, who played in his 58th consecutive and final game Saturday, what the Cats can achieve in the future is entirely up to them.

“I saw growth throughout the season,” Bergin said. “I saw maturing. I saw ownership of leadership by younger guys. This team going forward has all the potential in the world. The sky’s the limit for them.”