Football: Northwestern players prepare to face off against Illinois, and the fandom of friends and family 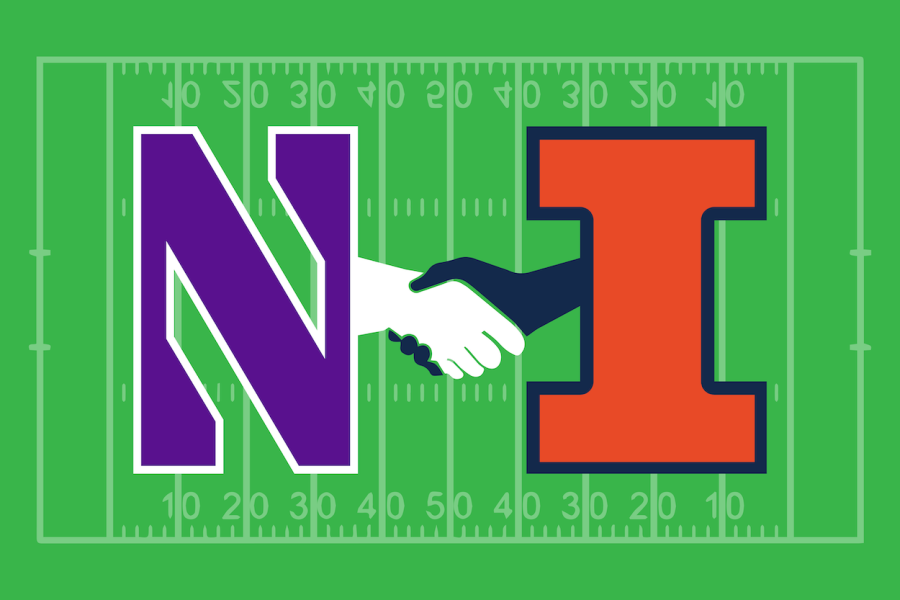 Northwestern and Illinois will face off on Saturday for not just the Land of Lincoln Trophy. Some family and friends rivalries are at stake as well.

College football’s most historic rivalries are founded on hate, like the Iron Bowl between Alabama and Auburn and The Game between Michigan and Ohio State.

Not so much with Northwestern and Illinois.

“For me personally, it’s fun,” sophomore tackle Peter Skoronski, a Park Ridge, Illinois native, said. “A bunch of my friends go to school down there, so it’s always like a personal rivalry in that sense just for trash talk and stuff like that.”

The Wildcats’ rivalry with the Fighting Illini is built off the connections between the two teams’ players. Both schools have large contingents of players from Illinois, especially from the Chicago area.

NU calls itself Chicago’s Big Ten Team. Throughout his tenure, coach Pat Fitzgerald has recruited numerous players from the Chicago area to join the program. Twenty three players on NU’s 2021 roster come from Illinois, and Fitzgerald himself grew up in Orland Park, a suburb south of Chicago, before becoming an All-American linebacker at NU.

The Cats’ 16th-year head coach said he tries to model the program after the city.

“When we’ve had that Chicago toughness, we’ve played really good football,” Fitzgerald said. “It’s something that we take great pride in here. It’s an attitude. It’s a mindset. It’s the beautiful summer days, it’s the harsh winters. It’s the foliage in the fall, and the hope of something new in the spring. Chicago is within the fabric of our program.”

Meanwhile, the Fighting Illini have 44 players from the state. Coach Bret Bielema was born in Prophetstown, Illinois, located 179 miles northwest of Champaign and 140 miles west of Evanston.

Those friend and family connections make the game and the rivalry special for the players.

Spivak’s cousin and sister are both Illinois alums. His cousin Michael Hoomanawanui played for the Illini’s football team from 2006 to 2009, and his sister Courtney Spivak swam at Illinois from 2006 to 2010.

“They have a hard time. (My sister’s) a few years removed,” Spivak said. “She got a couple master’s and doctorates from other schools, so she slowly waned her loyalty toward Northwestern, but I know there’s part of her deep down that’s still got it. Same with my cousin. They definitely have a lot of pride in their school, which is great.”

One of Niro III’s best friends is a student at Illinois. Though his friend isn’t a football player, Niro II said the two friends still have fun with the rivalry and they have plans to meet up after the game.

The number of in-state players at both schools also makes the rivalry more fun, Spivak said.

“Both schools do a really good job at recruiting guys in-state,” Spivak said. “It’s cool, obviously, to play against guys you know and have competed against for a while, it’s a lot of fun.”

This year, the stakes of the rivalry are already high, as the Cats are seeking their seventh straight win to claim the Land of Lincoln Trophy. With another victory, NU will even the in-state rivals at 55 wins apiece.

According to Niro III, the friends the Cats have down in Champaign will make the rivalry more intense and exciting.

“The Land of Lincoln, that’s our rivalry,” Skoronski said. “It’s a big deal every year no matter what our record is, no matter what their record is. The intensity does not change whatsoever.”