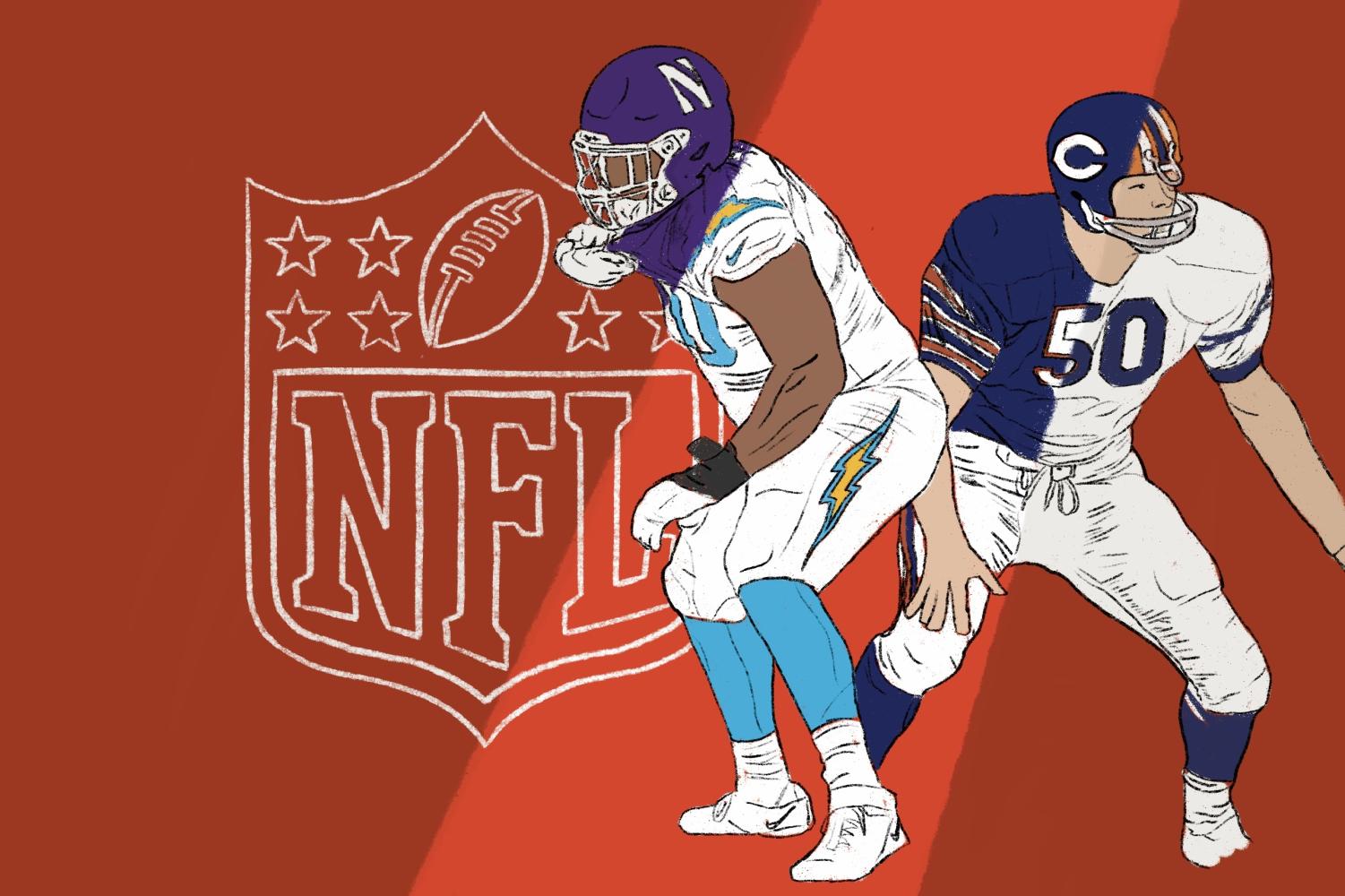 Numerous Northwestern and Illinois players have made the transition to the National Football League. The Fighting Illini currently have 17 former players in the NFL and the Cats have 16. (Graphic by Carly Schulman)

Numerous Northwestern and Illinois players have made the transition to the National Football League. The Fighting Illini currently have 17 former players in the NFL and the Cats have 16.

Football: Next level rivalry: Comparing the impact of Wildcats, Fighting Illini on the pro game

Before he was scoring 42-yard touchdowns for the Detroit Lions, running back Godwin Igwebuike suited up on the opposite side of the ball.

Igwebuike roamed the defensive backfield as a safety for the Wildcats, contributing to bowl victories in two consecutive seasons and earning two second-team All-Big Ten nods.His journey from undrafted free agent to converted running back may be incredible, but he’s just one player in a recent wave of “Pro Cats” helping turn the NFL purple.

The 2021 draft marked the first time multiple NU players were drafted in the first round, with the Los Angeles Chargers selecting offensive tackle Rashawn Slater at No. 13 and the Cleveland Browns picking cornerback Greg Newsome II at No. 26.

But is this trend enough to give the Cats bragging rights over archrival Illinois, a program that has produced legends such as Red Grange and Dick Butkus? Does a rivalry that has been as even as they come — currently sitting at 55-54-5 in the Fighting Illini’s favor — have a clear winner on the pro level?

Here’s how the two programs compare in their NFL footprint ahead of their matchup in the season finale.

Illinois and Northwestern are nearly even in their numbers of current NFL players, with the Fighting Illini boasting 17 alumni in the pros and the Cats close behind with 16. But when it comes to the impact of those players, NU is a clear leader.

The Fighting Illini have a defensive legacy, with fearsome linebackers Dick Butkus and Ray Nitschke ruling the NFL in the ’60s and ’70s and defensive lineman Simeon Rice racking up 122 sacks and a Super Bowl ring at the turn of the century. Running back and receiver Bobby Mitchell is another Illinois Pro Football Hall of Fame selection as a transcendent receiving threat in the 1960s.

Given the statewide popularity of the Chicago Bears, Illinois alum George Halas is a pretty important name. He coached the Bears for 40 seasons and formerly held the all-time coaching wins record while also playing for the team in the 1920s. Oh, and he co-founded the NFL. Recently fired Illinois head coach Lovie Smith, who did not attend the school or serve as a coach in Champaign prior to his NFL tenure, led the Bears to the Super Bowl in the 2006-07 season.

Thankfully for Cats fans, Pat Fitzgerald opted to stay in Evanston on a 10-year contract rather than entertain rampant NFL interest this past offseason. But NU has had a couple of stars on the sidelines.

Dennis Green, the Cats’ coach for much of the 1980s and the second Black coach of a Division I football team, turned the Minnesota Vikings into a perennial Super Bowl contender. Most recently, former Cats running back Jason Wright joined the Washington Football Team as its president in 2020, becoming the first Black person to serve in the role for an NFL team.