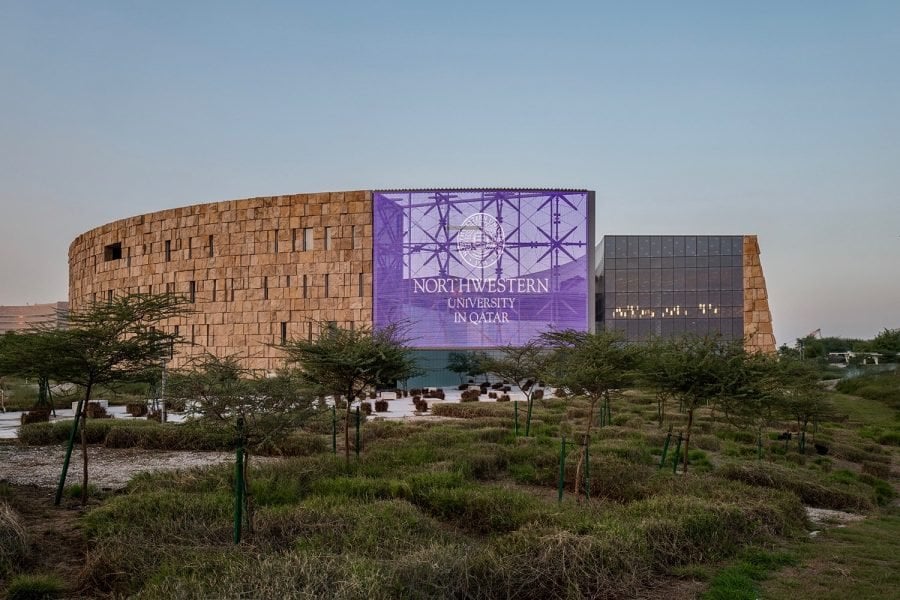 The event came exactly two years after NU-Q students’ last major protest, responding to derogatory comments then-Dean Everette E. Dennis allegedly made about students observing Ramadan. While Dennis stepped down in January 2020 and NU-Q appointed Marwan Kraidy as the new dean, students said systemic issues remain and NU-Q has not addressed many of the demands raised in 2019.

At a scheduled town hall meeting with Kraidy, students shared personal stories of their frustrations with the University and held up signs that read “We are not N this together” and “2 years later and we’re still here?”

Organizer and senior Khadija Ahmad spoke at the protest and helped write a statement of nine demands detailing student concerns and proposed solutions, which was issued before the protest. Fifteen NU-Q student groups have since signed in support of the statement.

“We were desperate. We weren’t getting a livable wage. We were seeing terrible things happen to our peers, and we were like, ‘It’s inhumane to keep us waiting, to tell us to go through the bureaucratic process,’” Ahmad said. “We could not survive like this anymore.”

Protesters’ main demands include changes to University policies to better serve low-income students. According to the student statement, NU-Q’s student wages are lower than some other institutions in Education City, a development which houses satellite campuses of multiple international universities.

In a recent town hall meeting, Kraidy said NU-Q was “dealing with a 20% budget reduction,” and administrators were deciding between providing summer housing and creating a student emergency fund, according to The Daily Q.

However, in response to student questions about financial aid, an NU-Q spokesperson told The Daily budget cuts have not affected financial aid.

“These concerns expressed by a student are unwarranted,” the spokesperson wrote in an email. “To date there have been no budget-related cuts to student financial aid and it is not related to the budget process.”

Students demanded the University raise the minimum wage from 27 Qatari rials per hour to 35 QAR. In comparison, current student wages at Georgetown University in Qatar typically range from 40 to 50 QAR, according to its website.

Organizers are advocating for the 35 QAR to correspond with the Evanston campus’ minimum wage of $13 per hour, the statement said. Although the $13 wage would correspond to 47.32 QAR, they adjusted their request to account for the fact NU-Q allows its students to work 20 hours a week, while the Evanston campus allows 15.

Reasonable wages are critical to living in Doha, one of the most expensive cities in the Middle East, senior Nadege Bizimungu, who also spoke at the protest, told The Daily.

“We cannot even study if we don’t have food on the table, if we don’t have the wages that we need,” they said. “If we cannot satisfy our basic human needs, how do you expect me to go to class in the first place?”

Bizimungu also said her family lost a significant portion of its income during the pandemic, but the expected family contribution to her financial aid increased. They currently have a registration hold for the upcoming term because they cannot afford the increased tuition.

Students also demanded NU-Q reverse a decision made earlier this year decreasing the maximum number of work hours during academic breaks from 40 hours to 20 hours. GU-Q currently allows students to work 40 hours during its summer and winter breaks.

“Current senior and junior students … factored this income into their university budget, and in the middle of their undergraduate studies, they were informed that they could no longer depend on it,” the statement said.

Students also advocated for reform of mental health services on campus and the establishment of an Office of Equity and ombudsperson similar to the Evanston campus. Adequately addressing Title IX claims through an Office of Equity, among other complaints, was also a demand of the 2019 protest.

Bizimungu said she filed a Title IX complaint at NU-Q. The campus doesn’t have its own Office of Equity, so she has been working with a member of the Center for Awareness, Response and Education on the Evanston Campus. However, Bizimungu said communication with the CARE office has been inconsistent and staff from the Evanston Campus do not understand the cultural context of Qatar.

For example, Bizimungu said students under the age of 21 who report assault cases involving drugs and alcohol to the police may face deportation because the law is stringently enforced in Qatar.

“The issue is having to explain ourselves multiple times, which ends up re-traumatizing us, specifically victims of sexual assault, and discouraging us from even reporting in the first place,” Bizimungu said. “One thing that I know for sure is that I wish I had not reported my case.”

Students also criticized NU-Q’s Health and Wellness department and advocated for the hiring of more department staff and standardization of accommodations for students struggling with mental health.

Senior Iffah Kitchlew spoke at the protest about her ongoing struggle to receive accommodations from NU-Q and her professors after her sister became terminally ill and died earlier this year.

Kitchlew told The Daily she attended online classes from the hospital last winter, but could not afford to let her grades drop because her merit-based financial aid scholarship is contingent on her GPA.

While she contacted the Health and Wellness department requesting representatives liaison with her professors to explain the situation, she said the department told her it was not under their jurisdiction.

“I was specifically told, ‘You of all people know that life is unfair and not everything works out,’” Kitchlew said. “When you’re told this by the one place that (says) they care about you, it’s heartbreaking, and I didn’t have the energy to fight it.”

Without support from the department, Kitchlew said she had to balance caring for her sister with continuously explaining the circumstances to her professors, which was “debilitating.”

When her sister died, Kitchlew said she asked a friend to communicate with NU-Q on her behalf while she grieved with family. Still, she said NU-Q contacted her directly to tell her she could take a week off classes but would have to meet with professors individually to discuss accommodations.

Days after her sister died, Kitchlew said she had to sit through Zoom meetings with professors. When she contacted Health and Wellness this fall to discuss accommodations for continuing anxiety and grief, she said the representative was unaware of her situation — indicating a lack of internal communication.

“I have been in this university for four years, and I’ve given so much to it,” she said. “We’re not in our homes, we pay a lot of money to come here, this is the only community we have — it’s very isolating to feel like you’re not being listened to or feel like you are continuously being turned away.”

NU-Q established a minor in Africana Studies earlier this year. But Bizimungu, president of NU-Q’s African Students Association, said the University has no permanent Black and sub-Saharan African faculty on staff — something students say should change.

Students are also advocating for the hiring of at least one East Asian faculty in residence and research committee member and the expansion of South Asian studies.

Junior Monazza Farooqi, an international student from Pakistan, said they only recall one course related to South Asia offered during their time at NU-Q: a class on British India, taught by a white British professor.

“Most of the sources that we were examining were written by British people, and the professor was like, ‘It’s British India, so obviously we’re going to teach this from the British perspective,’” Farooqi said, “which doesn’t really make sense because you should not be teaching colonialism from the colonizer’s perspective.”

Both Farooqi and Ahmad, who is also from Pakistan, said they have been called a racial slur referring to Pakistani people by other students on campus.

Ahmad said the large South Asian migrant worker population in Qatar shapes the experiences of South Asian students, who are one of the largest groups of international students on campus.

“When people see us around campus, I feel like in the back of their head, we’re always the lucky ones,” she said. “(They think) we’re poor, we’re dirty, but somehow we landed ourselves this opportunity where we got the same education as them.”

At the town hall, Kraidy said he would look into student concerns — including establishing an Office of Equity in Doha — during his visit to the Evanston Campus this month. As of Sunday morning, Kraidy was still in Evanston.

“There’s no excuse to delay, but these steps by necessity do take some time,” Kraidy said at the protest.

While students plan to keep advocating for their demands, Kitchlew said sustaining momentum is difficult because upperclassmen organizers will graduate.

Some students also fear retribution for speaking out against the administration, she added.

“It’s important to keep talking about these things to push for reform because the institutional memory resets every four years,” Kitchlew said.

Ahmad said students who speak out against NU-Q risk their chances of getting hired for student ambassador positions on campus because the University expects these students to act as “the perfect PR person.” Faculty have directly spoken to her about messages she has posted on social media criticizing NU-Q, she added.

Still, Ahmad said she is committed to advocating for change on NU’s Doha Campus.

“I don’t have anything else left to lose,” Ahmad said. “I find this such a reprehensible place that the only plausible solution for me is to fight for it and make it better because what we are going through is unlivable.”

— NU-Q students and alumni stage silent protest, dean responds after ‘To Hell with them’ comment