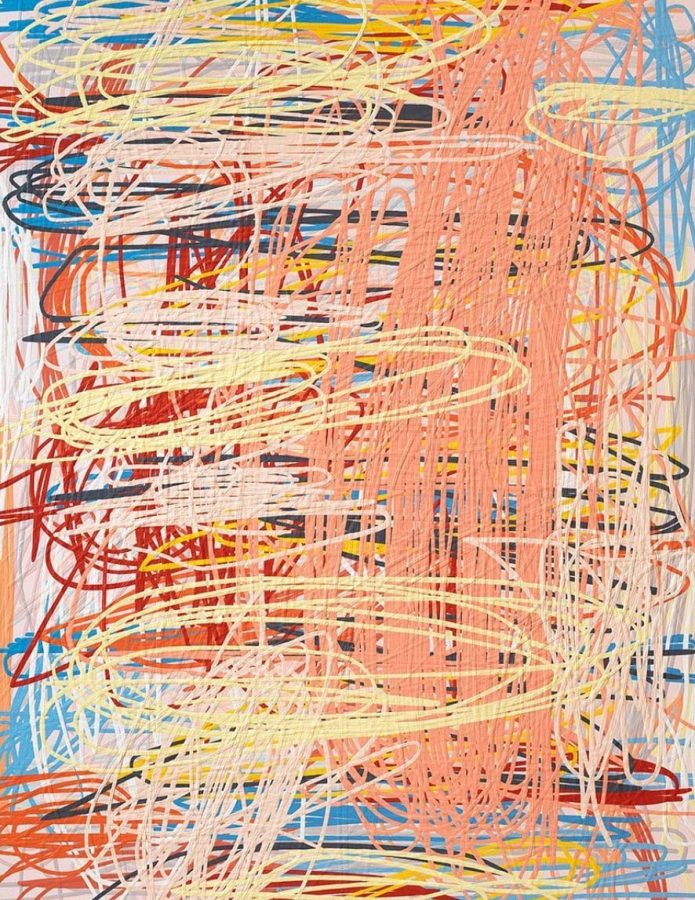 One of artist Matt Irie’s pieces on display at the Evanston Art Center. “Arresting Gestures” is on display until Dec. 19.

Matt Irie (TGS ’02) always had a passion for manipulating the mundane.

The artist has transformed items as simple as a saucepan, bath towel and even a stop sign into works of art.

“There’s something about going to the hardware store and then trying to make something extraordinary out of the ordinary,” Irie said.

In his newest exhibition, “Arresting Gestures,” Irie collaged drips of house paint onto a panel to explore the tension between reality and simulation. Evanston Art Center hosted its opening reception for Irie’s exhibition Sunday. The exhibition will remain on display until Dec. 19.

After graduating from Northwestern, Irie completed a permanent commission for the Chicago Public Libraries in 2005. Since then, his work has been featured in places far and near like Sweden, New York, Wisconsin and California. Last year, he participated in a two-person exhibition at Left Field Gallery in Los Osos, California.

The exhibition’s erratic drips and scribbles nod to artists Jackson Pollock and Cy Twombly, while also pushing the boundaries of their signature styles, Irie said. While Pollock used the drip technique with rapid and random application, Irie said he composed his drips very slowly.

Although the drips appear to be chaotic and improvised at first, upon further inspection, it becomes clear that the scribbles are purposefully layered atop one another, Irie said.

Disillusionment lies at the core of the exhibit, he added.

“When you see the paintings, it looks like I scribbled on them — they’re very gestural, like large arm movements or big arcs and scribbles, and they have kind of a quick and explosive energy,” Irie said. “But they’re painstakingly made and collaged on there to give that illusion. The gestures that you’re seeing are arrested.”

Sarah Ruthven is an instructor of art history and art appreciation at McHenry County College, where she is also Irie’s colleague. To accompany the exhibition, Ruthven wrote a description of Irie’s work for a brochure. In it, she detailed how the layering of drips and shifts in color create depth while also casting doubt as to what the viewer is actually seeing.

Cara Feeney, director of exhibitions at the Evanston Art Center, has worked with Irie for months to help execute his vision of the exhibit.

Feeney said the bright colors are a welcome aspect of the show, especially as the days become shorter and darker in the winter.

“I think it’ll be a really beautiful exhibition and really worthwhile to see in person because of the techniques he’s using to create these paintings,” Feeney said.

While Irie has been preparing for this exhibition for nearly a year, he said he has worked with this collaged-drip process for about four years.

In many of his previous works, Irie has investigated ambiguity by making materials “misbehave,” he said.

“The main inspiration for the body of work in general is this interest in both the kind of spontaneous or improvised gesture and the kind of slow and methodical planning as composition,” Irie said.