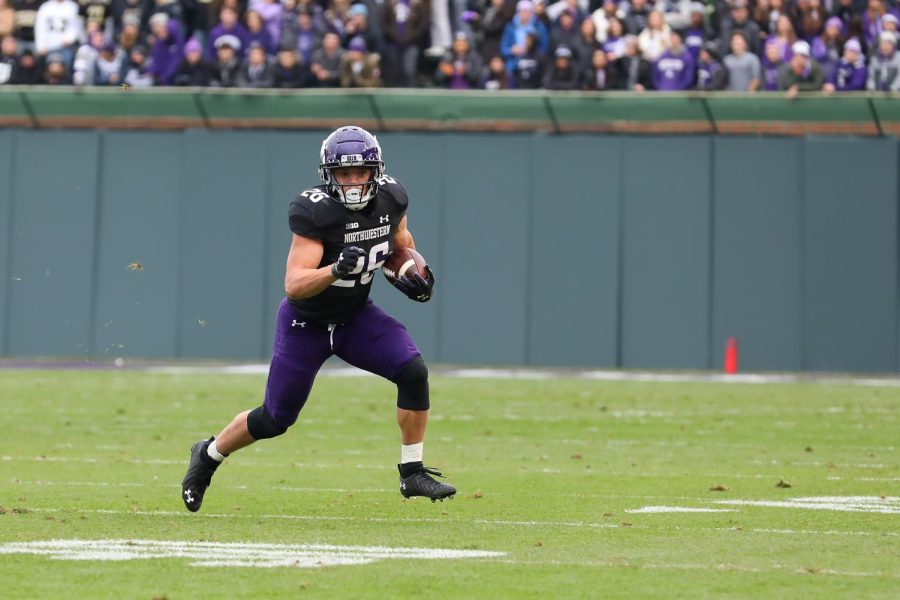 Northwestern, seeking to salvage some pride at the end of a disappointing season, “hosted” Purdue Saturday at Wrigley Field in the stadium’s first football game since the Wildcats’ infamous 2010 loss to Illinois.

NU went toe to toe with Purdue in the first half, but ultimately couldn’t keep up with Boilermakers quarterback Aidan O’Connell in a 32-14 loss that killed the Cats’ bowl chances once and for all.

The Boilermakers came out firing on their opening drive, as O’Connell completed three of his four pass attempts for 40 yards. Senior defensive tackle Trevor Kent sacked O’Connell on third and two, however, and kicker Mitchell Fineran’s 37-yard field goal try was way offline. NU’s first drive ended in a similar fashion, blown up by junior George Karlaftis’s sack that forced a punt. After a Purdue punt, the Cats’ next drive died when Karlaftis swatted away graduate student kicker Charlie Kuhbander’s 38-yard attempt.

Hilinski found junior wide receiver Malik Washington for a leaping 46-yard catch on the Cats’ next drive, but NU couldn’t capitalize. O’Connell’s 53-yard touchdown pass to wide receiver Milton Wright gave the Boilermakers a 13-0 lead, but the Cats responded with a sustained drive, capped by Marty’s four-yard touchdown pitch to sophomore Marshall Lang as time expired in the second quarter.

Purdue kicker Chris Van Eekeren slipped on the second half’s opening kickoff and inadvertently squibbed it; the Boilermakers corralled the ball and drove 49 yards to O’Connell’s second touchdown pass, again to Wright. NU mounted a seven-minute response, going a run-heavy 65 yards to sophomore running back Evan Hull’s sixth rushing touchdown of the season. The Boilermakers stretched their lead to 26-14 with another Wright touchdown shortly thereafter.

The Cats’ next drive fizzled out on the first play of the fourth quarter, when Marty threw incomplete into traffic on fourth and two. Fineran kicked his third field goal to put Purdue up 29-14. NU’s last chance to get back in the game ended explosively, as the Boilermakers sacked Marty four times in a row, lastly on fourth and 26 to all but wrap up the win.

Change has been the only constant at the quarterback position for NU in 2021, and the Purdue game was no exception. Marty started the game and completed 10 of his 14 attempts for 93 yards and a touchdown. Hilinski also saw time, completing eight of his 11 attempts for 66 yards, and an interception. Marty played most of the second half, but Hilinski finished the game, which offered little in the way of clarity either way.

It’s been a season to forget for Kuhbander, whose 38-yard field goal try with 2:29 left in the first quarter was blocked by Karlaftis. The block cost NU three important points and dropped the graduate student to 6 for 12 on the year. A more consistent team presence on special teams is a must if the Cats have designs on a 2020-style turnaround in 2022.

3. Secondary in need of offseason work

The departures of Greg Newsome II and JR Pace were always going to hurt, but NU’s regression in the defensive backfield remains stark. O’Connell picked apart the Cats’ secondary, completing 29 of his 39 passes for 423 yards; Wright hauled in eight catches for 213 yards, and burned junior defensive back AJ Hampton Jr. on each of his first two touchdowns. Tinkering with the DBs is an imperative if NU is to return to its past success against the pass against Illinois and next year.