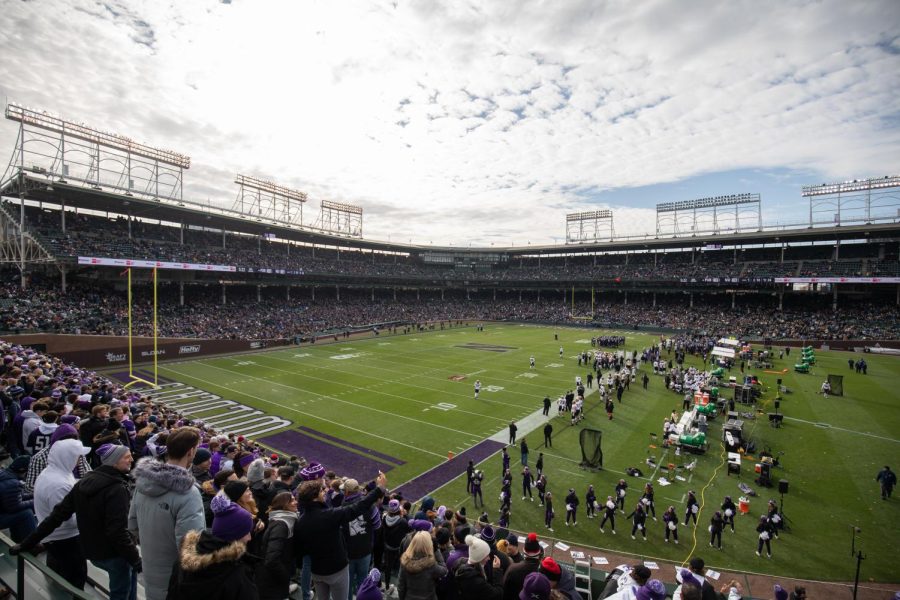 The gridiron on Wrigley Field. Northwestern failed to pick up its first Big Ten West win of the season in a 32-14 loss to Purdue.

After NU cut the score to 13-7 going into halftime, the Boilermakers ensured that no “W” flag would fly after this one. The NU (3-8, 1-7 Big Ten) defense struggled with the long ball in a 32-14 defeat, surrendering four pass plays of over 40 yards to Purdue (7-4, 5-3) but the novelty of having football at the Friendly Confines delivered.

Watching football at Wrigley was a wonderful departure from the Cats’ regular Ryan Field experience. These are some of the highlights of Wrigley Field’s football crossover.

Constructing a football field on the hallowed grounds of Wrigley Field gave NU football a literal imprint on the venue, but the Big Ten theme extended beyond the turf. The hand-operated Wrigley scoreboard tracked the scores of the conference’s other 11 AM games, keeping fans up to speed on the slogfest between Penn State and Rutgers and No. 4 Ohio State’s blowout of No. 7 Michigan State.

NU-centric touches, from the purple and white flags to the inflatable entrance in centerfield, helped give the mantra “Chicago’s Big Ten Team” some substance. The play on the field helped, too. Senior quarterback Andrew Marty’s touchdown strike to Marshall Lang ended the first half on a good note, and to the notes of the Wrigley Field organ playing “Go U Northwestern.”

“The environment was amazing,” sophomore running back Evan Hull said. “The history of Wrigley Field and to be a part of this… it’s a great experience, win or loss.”

Calls to the bullpen

Despite starting Marty for the past two games, coach Pat Fitzgerald put in a call to the bullpen early on. Sophomore quarterback Ryan Hilinski came in relief for the Cats’ third drive, and Hilinski made one of his finest throws of the season, a 46-yarder, on the next drive to junior wide receiver Malik Washington, Jr. But by the next drive, Fitzgerald reversed course, reinserting Marty under center. Marty finished the game as the Cats’ leading passer with 93 yards and a touchdown, but Hilinski, in the third reversal of the game, actually finished the game under center and threw an interception in the fourth quarter.

“We turned the ball over a bunch, and we felt like we wanted to play to the guys’ strengths,” coach Pat Fitzgerald said. “(We wanted to) keep Purdue off balance at times.”

While the defenses kept the score low early on, the fans packing Wrigley Field could turn to the arms to stir the game’s intrigue.

Wrigley’s conversion from baseball to football made for unique sightlines for a football game, and much more interactive ones at that. The game’s 31,500 spectators spread across nearly every section, from the Wrigley rooftops to the upper deck, and seats behind the west end zone were just yards away from the back boundary of the end zone.

The best part, though — the field goals. Kickers aiming toward the east end zone’s goalposts kicked right into the packed student section. When Purdue kicker Mitchell Fineran opened up the scoring with a 32-yard field goal in the second quarter, NU students scrambled to find a souvenir game ball. Breaking from Wrigley Field tradition, they didn’t throw it back.

With the south sideline of the football field brushing up against the bleachers, NU and Purdue both fit along the north sideline, with a 10-yard buffer zone between the two Big Ten West rivals. That arrangement required offenses to run through the opposing defenses on some possessions to set up, and some defensive substitutions required full-field sprints.

“We practiced for it throughout the week, we were prepared,” senior defensive lineman  Joe Spivak said. “Coach Fitz was trying to mess with us on Tuesday and Wednesday and make it out worse than it would be, and it was super smooth.”

Though Fitzgerald said the proximity of the field to the walls was not an issue, quarterbacks also appeared reluctant to test coverage along the south sideline — all but one of the game’s passing touchdowns came along the north boundary.

While not as awkward as the 2010 matchup’s single end zone design, this year’s upgraded set-up was a curveball for players and spectators alike.