Women’s basketball: After leaning to both extremes in first half, Wildcats beat neighboring Loyola 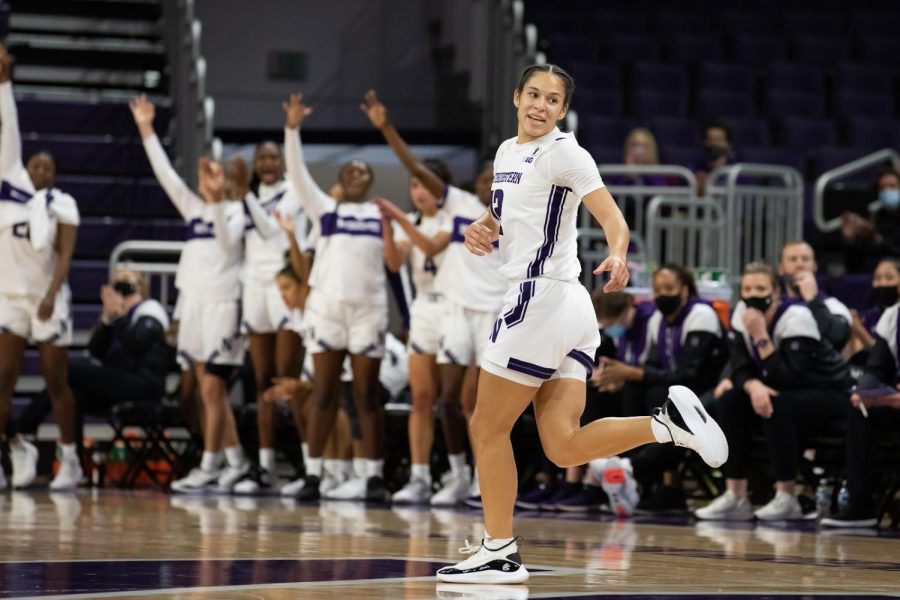 Senior guard Veronica Burton looks back as her team celebrates behind her. Burton notched 16 points and seven assists in the Wildcats’ win over the Ramblers.

Northwestern’s Wednesday matchup was a tale of one city and two quarters.

Loyola (1-2) traversed a mere six miles up Sheridan Road to face the Wildcats (3-0, 0-0 Big Ten) in the first matchup between the crosstown rivals since 2015. But this time around, NU’s star senior guard from that season, Maggie Lyon, donned maroon-and-gold as the Ramblers’ assistant coach. Abi Scheid, another fellow former Cat turned director of women’s basketball operations, also made the trip to Evanston.

Both were recruited and coached under current NU coach Joe McKeown. Lyon ultimately led “Chicago’s Big Ten Team” to an NCAA Tournament berth in 2015, while Scheid was captain of the 2020 Big Ten Conference title team and named to the All-Big Ten first team in the same year.

“There are no two more sure Wildcats than those two,” McKeown said. “To see them at the other end with Loyola was surreal … I’m just really proud of both of them, they have tremendous futures.”

After a brief on-court acknowledgement of the two alumni and several handshakes, the Cats were off to the races.

Within 20 seconds, it was clear it was freshman forward Caileigh Walsh’s time to shine. Walsh nailed two clean 3-pointers in the first three minutes of the game, both assisted by senior guard Veronica Burton. The two-time Big Ten Defensive Player of the Year ended the quarter with seven assists — matching her season high — to five different players.

“When I get the assists, it’s really a credit to my teammates putting the ball in the basket,” said Burton. “We didn’t slow down and go at Loyola’s pace. At the end of the day, (my teammates) have to hit the shots and they did that.”

Burton’s performance and Walsh’s eight points ultimately led to NU’s season high for scoring in one quarter with 25 points. The Cats rocketed to a 25-10 advantage at the first quarter break. But with every mountain comes a valley, or at least a second quarter.

The Ramblers came out of the break with six unanswered points, while the Cats did not notch one of their own until a driving layup by Burton nearly four minutes into the quarter. NU struggled to find the net for the rest of the second quarter, scoring a season-low six points over the course of those ten minutes.

The game’s next stage also brought a flurry of turnovers. The Cats forced nine Loyola turnovers throughout the second quarter, a trend that continued for the rest of the defense-heavy game. Burton said McKeown set a goal for 25 turnovers for the game, a benchmark the team eventually beat by one.

NU ultimately finished off the Ramblers 63-47 in a game that felt closer than the final score implied. Unfortunately, a strong defense cannot always win games with a streaky offense, something McKeown said the team hopes to work on going into Sunday’s matchup against DePaul and Big Ten play starting in December.

“We have to be a little more consistent quarter to quarter,” McKeown said. “You want to be playing at a high level in November, but it’s hard, especially when you have new players and a new team. I’m excited to see where we can be if we can stay healthy.”

— Women’s Basketball: Wildcats surge past Gauchos in second season of the game