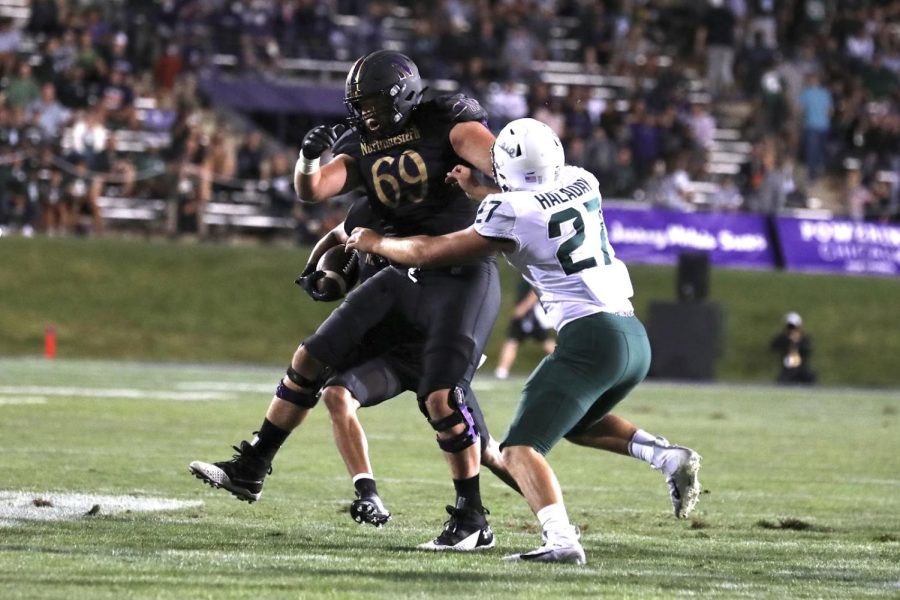 Charlie Schmidt prepares to block. The junior offensive lineman and Cubs fan said “it’s gonna be really fun to see” how Purdue and Northwestern’s game at Wrigley Field plays out.

Northwestern, like its home city and region, is a team divided along partisan lines.

Some Wildcats, like junior offensive lineman Charlie Schmidt, are Chicago Cubs fans. The Libertyville native treasures the 2016 World Series, which he called “a really big moment for the city and the fanbase.” And some Cats are Chicago White Sox fans. “Most of my family are South Side guys and we grew up Sox fans,” sophomore defensive back Cameron Mitchell said.

What NU lacks in a baseball consensus it makes up for in a football consensus: backers of David Ross’s and Tony La Russa’s teams alike are looking forward to the Cats’ clash with Purdue Saturday at Wrigley Field.

“It’s a great honor,” coach Pat Fitzgerald said. “Like the last time, the privilege to lead a team out into that venue will be spectacular.”

“This is the closest game to my hometown that I’ve had since being in college,” Mitchell said. “I’ve got a bunch of a family coming up, so this is huge … being close to home, it’s an awesome experience.”

For offensive lineman Peter Skoronski, a Park Ridge native and White Sox fan, playing at Wrigley Field has a deeper, familial connection. His grandfather, five-time NFL champion offensive lineman Bob Skoronski, routinely played at the Cubs’ home during his tenure with the Green Bay Packers. The Chicago Bears played at the Friendly Confines from 1921-70, winning NFL Championship Games in the ballpark in 1933, 1941, 1943 and 1963.

“That’s the biggest thing I’m looking forward to this weekend, playing on the same field that he did,” Skoronski said. “My dad mentioned a cool picture he had of my grandpa coming out of the dugout, the locker room, in Wrigley.”

When the Bears moved out in 1970, football was absent from Wrigley Field for 40 years. Unusual circumstances marred its return for the Cats’ 2010 game against Illinois, as NU and the Fighting Illini were forced to run all offensive plays in one direction because the east end zone was dangerously close to the right field wall.

A more normal gridiron awaits NU this time around, but some logistical considerations remain. The Cats and Boilermakers will share a sideline, and NU plans to use the Cubs’ bullpen as an in-game locker room.

“Our facilities staff and operation staff  — and it’s the same thing with Purdue  —  we’ll all work through the logistics with the Big Ten,” Fitzgerald said. “We’ll make sure there’s fairness, and no competitive advantages with substitutions … we’ll play it straight up.”

The unusually high-profile nature of the Purdue game hasn’t been lost on the Cats, who are determined to salvage some dignity to close the season despite their 3-7 record, particularly on the defensive side of the ball where NU allowed 497 yards to Wisconsin last week in a 35-7 loss.

“This last week we’ve been preaching that these last couple games are all about pride … and putting what you want on film at the end of the season,” Mitchell said. “It’s about being focused, being locked in, being fundamentally sound and staying true to your technique.”

— Football: A.J. Hampton Jr. goes from laughing in the locker room to locking down wideouts on the regular