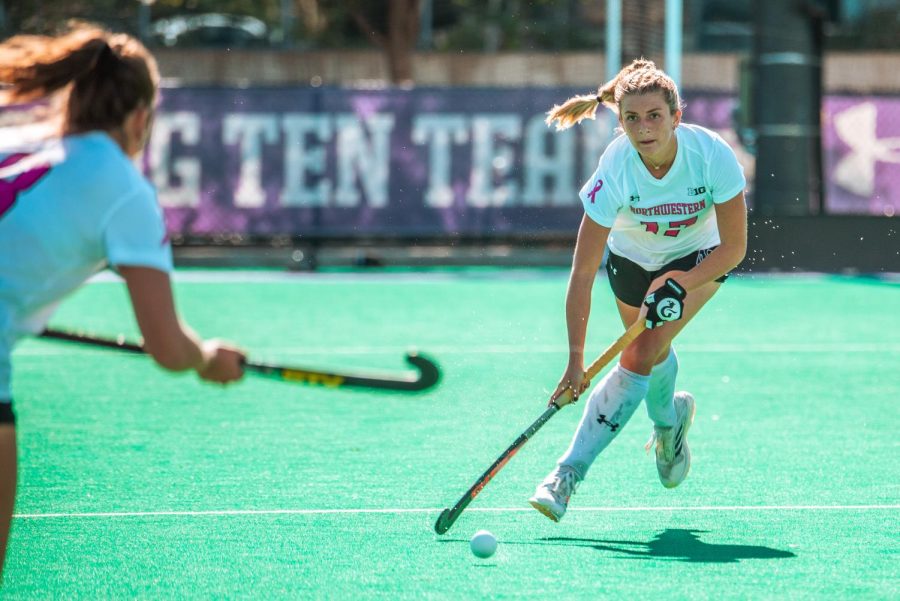 For the first time in program history, Northwestern advanced to the national championship game, defeating Harvard 2-1 in overtime in the semifinal.

Junior forward Bente Baekers scored the game-winner just under two minutes into overtime, right at the top of the circle on a penalty corner drawn by sophomore midfielder Maddie Zimmer.

Baekers converted on that attempt after missing a penalty stroke in the second quarter that would have given NU a 2-1 lead.

“I’m really happy that (Baekers) was able to put that home after her stroke, because I know she’s gonna feel a lot better tonight,” coach Tracey Fuchs said.

Prior to Friday’s game, the Cats hadn’t won in overtime this season, and Harvard had gone 5-1 in its overtime matchups.

The Wildcats opened the scoring after Maren Seidel converted on a penalty corner less than 10 minutes into the game, also from the top of the circle on a very similar play to the game winner. The score was the first goal Harvard, known for its stingy defense, allowed in the tournament.

But the Crimson tied the game up less than a minute later on a penalty corner of their own, with Hannah Pearce burying the drag flick. That goal was the first NU allowed in the tournament.

After the exciting first quarter, the two teams did not score for the remaining time in regulation. The Cats dominated play, despite playing five minutes man-down in the third quarter after Liese Wareham was issued a yellow card, but they also failed to score even on the man advantage after Harvard’s Rachel Greenwood earned a yellow card early in the second quarter.

NU spent most of the second half in their offensive zone, but struggled to find quality scoring opportunities against the Crimson’s defense.

“They’re stingy, and great tacklers,” Fuchs said. “We really emphasized over and over to attack the outsides, and then to just use the simple passes. It was a little bit tough because the field was a little bit dry, so we couldn’t play exactly how we wanted to play but this team has adjusted all year. We knew our opportunities would come and they did.”

Junior midfielder Alia Marshall, who inserts the ball on the penalty corner, said because of the Crimson’s stingy defense, NU knew penalty corners would be one of their best opportunities to score. The Cats practiced hits like Baekers and Seidel’s scores, and focused on getting the initial shots on net to provide rebound opportunities.

For senior defenseman Kayla Blas, being able to compete in the program’s first national championship game is a sign of how far the program has come since her freshman year, when they didn’t make the NCAA Tournament, and how much this year’s team has grown.

“To be able to compete for a national championship with people that are my best friends, the friends that I’m going to walk with in college and be friends with my whole life, I’m just so excited,” Blas said. “I’m so proud of every single person. Any of us will say we’re all one of 28 and it’s gonna take all 28 of us to win on Sunday like it did for us today.”