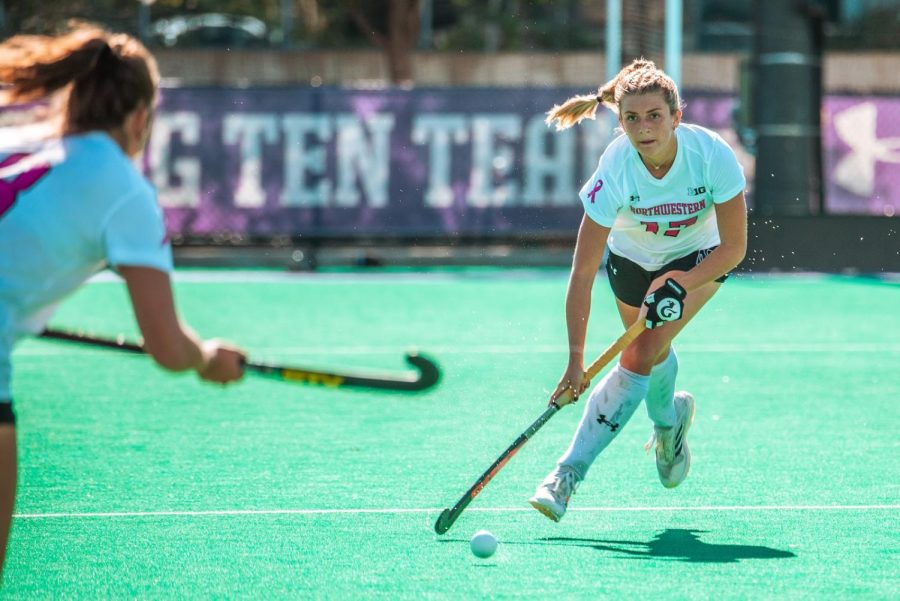 Junior defender Alia Marshall looks to pass the ball to her teammate. Marshall will be one of the central leaders of Northwestern's defense against Harvard.

Zimmer said it was the program’s mission to make it back to the Division I Field Hockey Tournament and bring home a title. Following a crucial win over No. 2 Iowa on Sunday, the Wildcats are on their way to doing exactly that, heading to the Final Four for the first time in more than two decades.

“Our dream started becoming a reality heading into the NCAA tournament,” Zimmer said. “We were playing well. We knew what we needed to do to win. Everyone on the team has been working so hard during the season leading up to this.”

NU (16-5, 5-3 Big Ten) will battle Harvard on Friday in Ann Arbor, Mich., in a make-or-break matchup. The squad has not met the Crimson the entire season, putting both teams on an even playing field in the contest. However, coach Tracey Fuchs said the Cats have prepared all week and are ready to compete come game day.

Fuchs added NU’s priorities will be capitalizing on its versatile offense. She called the fast-attacking unit’s forwards some of the best attackers in the sport. Led by redshirt junior Bente Baekers, who leads the Cats in goals and assists, these players will be key components against Harvard.

Graduate student forward Clara Roth will be another important member in the contest alongside Baekers. After transferring from Princeton, Roth has been a standout player for NU, holding second place for goals and assists. She said her fifth year as a Cat has been “amazing,” adding she gelled with the team from the first practice.

“From the first minute I chose this program, I knew this was a really good team,” Roth said. “We have a lot of talent, both from experienced players and the freshmen, so I was looking forward to playing (for the Cats) this season.”

Roth attended the 2019 Final Four as a member of Princeton’s team. Going into Friday, she recalled her first appearance in the NCAA semifinals, emphasizing she’s ecstatic for the team to get this opportunity.

Zimmer expressed the surrealness of the entire season, highlighting the group’s hard work and effort since its loss to Iowa in the 2021 spring NCAA Tournament. Fuchs noted Zimmer’s immense talent on the field, calling her a “world-class” field hockey player.

Her accomplishments back up Fuchs’ claim, as Zimmer was one of the five Cats to represent U.S. field hockey at the Junior World Cup. Her quickness and agility in the midfield will be an advantage NU must exploit against the Crimson. Known for her coast-to-coast fastbreak goals, Zimmer will be one of the leaders in the midfield.

The team’s biggest test is ahead in a fast-paced Harvard midfield unit, a group that rarely allows its opponents possession.

Fuchs said NU’s defense will be shifted into high gear and stressed the team’s strength at corner defense. She praised senior defender Kayla Blas and junior defender Alia Marshall as two players who have stepped up tremendously in the backline.

Another key player to watch — sophomore goalie Annabel Skubisz, who Fuchs said was the missing puzzle piece to the Cats’ stealthy defensive group. In NU’s defeat over the Hawkeyes, Skubisz earned her seventh shutout win in the 2021 campaign. Her presence in the cage has been one of NU’s secret weapons since August.

With the stakes of this match set extremely high, Fuchs is emphasizing focusing on the details come game time.

“We’re really excited to play in front of a lot of purple on Friday,” Fuchs said. “You just gotta take it in stride and remember it’s the simple things.”

— Field Hockey: Northwestern will square off against No. 8 North Carolina Friday in Iowa City