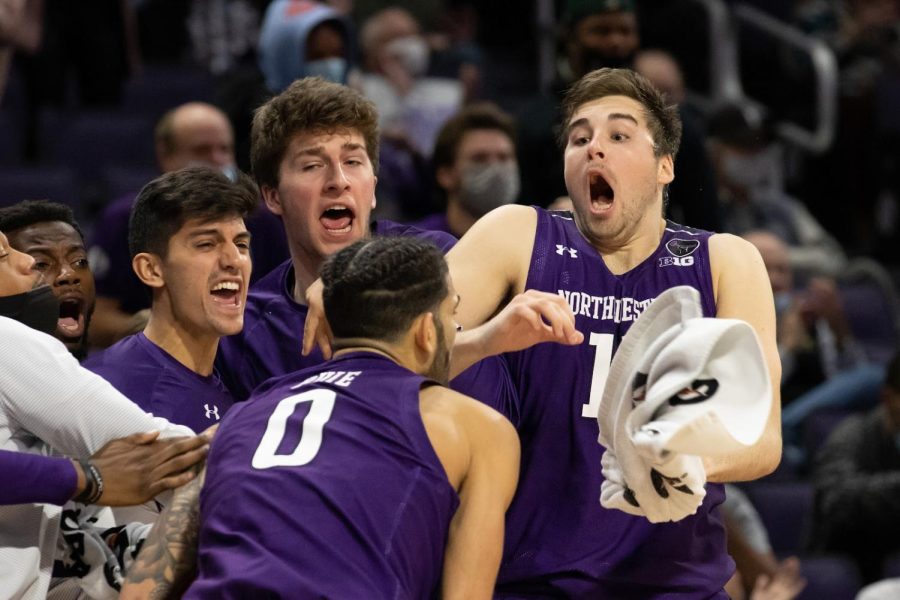 Junior center Ryan Young and the Northwestern bench react to a Wildcat basket. NU trailed New Orleans at halftime and much of the second half, but rallied for an 83-67 victory.

Upon winning the opening tip against New Orleans, Northwestern sent a message Tuesday night by immediately attempting two three-pointers: they were going to live or die behind the arc tonight.

The Privateers entered the night 0-4 all-time against the Wildcats and 20.5-point underdogs going into tonight’s matchup. According to KenPom, this NU team has the second-most difficult season of anyone since the 2001-02 season. But this game wasn’t supposed to be one of the major challenges.

“I know a lot of people don’t realize, especially early in the year, that (the) team we played tonight is gonna win a lot of games,” coach Chris Collins said. “A lot of people picked them to win their league … but can we do better? Yeah.”

The first half was largely controlled by the Cats, possessing the lead since going up 4-2 all the way until 1:20 left on the clock. New Orleans graduate guard Derek St. Hilaire was in the building though. This seemed to be an issue for the Cats, who allowed him to score 18 in the first half  — almost half of his team’s 37.

But another significant first-half issue came from within — or outside, rather.

After taking over half of their shots from beyond the three-point line, NU had only converted 28%. Sophomore guard Ty Berry made two in the first half, but seven others had missed at least one, four of them missing two. However, any team who shoots 18 threes in the first half — five more than New Orleans attempted all night — is certainly capable of putting up 15 more.

“I just think it’s what the game’s giving you,” Collins said. “The game was giving us kick-outs, from the post and from the drives, so tonight was a night where we shot 33 threes. As long as they’re good ones, we need to take them.”

Ultimately, the good ones started to go in, which was good for the ’Cats because they had no choice but to go in given the situation.

The Privateers came out firing in the second half, building on their two-point lead by scoring in four of their first five possessions, resulting in a quick nine-point lead.

Ryan Young then had a moment.

With 16:11 left in the half, the redshirt junior center slammed down a putback dunk on top of a Privateer defender, sending an electric current through the all-purple Northwestern bench and the four other Wildcats on the floor. In the ensuing minutes, the Cats rallied to take a 51-50 lead.

The lead traveled from Evanston to New Orleans and back to Evanston again. Then the dam holding this tense back-and-forth cracked, and the threes started to pour through.

Five scoring possessions ended with the Wildcats adding a total of 15 points to their towering score.

Collins said teammates kept encouraging players like Berry to continue shooting throughout the second half, despite missing a couple threes early on.

Despite the lackluster showing from deep in the first half, the Cats grinded to six more threes on 40% shooting in the second.

Ultimately, the three-ball lived on, and in a timeout huddle with 50 seconds left, NU huddled around their veteran coach and couldn’t contain their excitement about the night’s comeback.

“We talked in the game about playing with passion and fire, and I was just kind of letting it out for them,” Collins said. “I’m in the fight with them.”