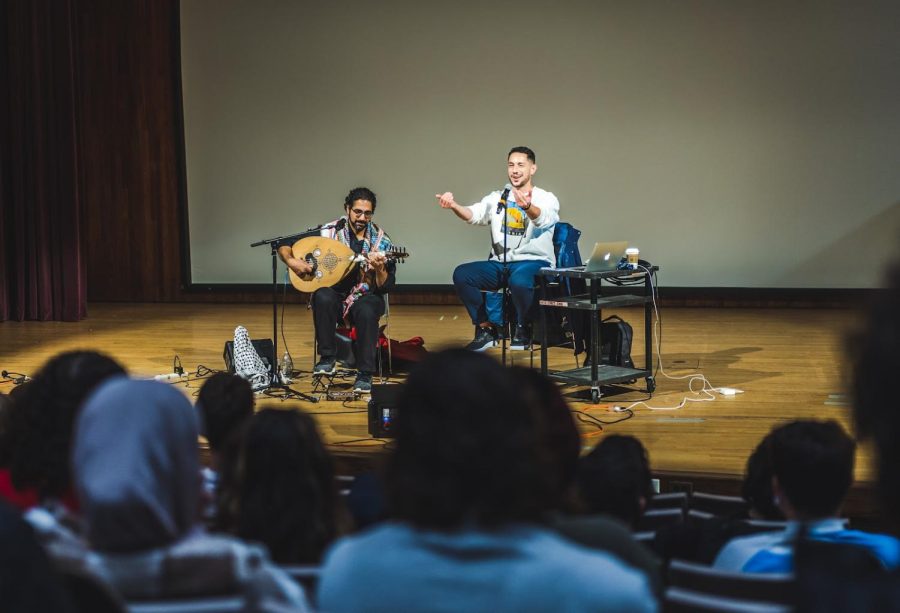 Syrian-American rapper Omar Offendum (right) and performer Ronnie Malley (left) play a song for the audience at the McCormick Auditorium.

The event, held at McCormick Auditorium, meant to provide students with an opportunity to delve into their culture through music. Offendum held a workshop and later a live performance of his songs and poems with oud player Ronnie Malley.

The performance consisted of poetic recitation, storytelling and rapping, in a blend of English and Arabic, while the workshop was a conversation about his life and how poetry and music have played a significant role in shaping who he is.

“When I first began as a young (artist), I was a part of this youth culture of hip-hop,” Offendum said. “Now, I’m almost 40, and there’s a whole wave of young Arab rappers all over the Middle East who have taken what we thought was some small fledgling art form and taken off with it.”

Offendum’s music is a blend of hip-hop and Arabic poetry. He told the audience that growing up, he had rap music in his headphones and Arabic poetry in his school books. Incorporating the two, he found a way to express his identity and share it with the world.

Arabic Prof. Ragy Mikhaeel said Offendum’s music is important for him and younger generations, explaining that the expression of art during difficult times in the Arab world helps the community.

“Having Omar and Ronnie with us today is simply opening a window on modern Arab culture and the new generation that has no fear,” Mikhaeel said.

Offendum’s music heavily centers identity, especially being a Syrian American and first generation immigrant. His works are often about the Arab American immigration experience, the rich Arabic culture and his personal loss and growth.

He also uses his platform and gift to speak about issues including the Syrian refugee crisis, but he explained that creating work on heavy issues can take an emotional toll on artists.

“I cannot listen to certain songs from earlier on in the (Syrian crisis),” Offendum said. “They inspire me, and I’m glad I did them, but it’s almost depressing to hear how optimistic we were looking back at the situation.”

Communication senior Alex Manaa, who attended the workshop and concert, appreciated how Offendum’s art is rooted in identity.

“(He’s) using his platform to shed light and build this beautiful, sympathetic, compassionate image of his people,” Manaa said.

Offendum’s workshop, “From Kabbani to Kendrick: Building Bridges between Poetry and Hip-Hop in the Language Classroom,” was more of a conversation with the artist than a presentation. Offendum challenged participants to reflect on who they are, where they came from and where they are going using poetry and music as a means to express themselves.

Students like Manaa took the challenge and created poems that represented their identity. She recited her impromptu poem using English and Arabic to express her identity as a first-generation immigrant from Egypt.

“Given the scale of devastation, how big the wounds are still for so many people, I hope we never forget that we can find ways to heal,” Offendum said. “Music does that for me.”

—  Fatimah Asghar urges audience to speak out against injustices in poetry reading, Q&A