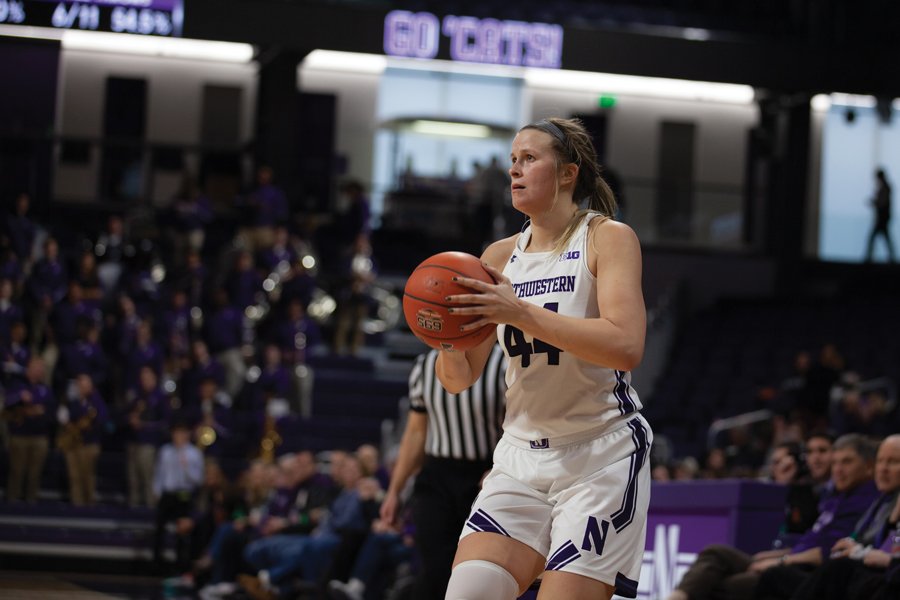 It’ll be a homecoming for Abi Scheid and Maggie Lyon, two former Wildcats, when Loyola visits Welsh-Ryan Arena on Wednesday.

“Having both of them at Loyola, it will kind of be weird looking down (the court),” coach Joe McKeown said. “We’re just happy that people think enough about our program to hire our coaches and players.”

Both Scheid and Lyon rank among the Cats’ top players in program history. Lyon was named the 2013 Big Ten Freshman of the Year and finished her time at NU seventh all-time in points. She was also an honorable mention for the All-Big Ten team every year she played for the Cats.

McKeown, who was hired in 2008, credited Lyon with helping kick-start the program’s success, calling her one of NU’s strongest players ever and saying she remains close to the team today.

In the Cats’ 2020 Big Ten regular-season championship team, Scheid was one of the Cats’ stars. During that season, she ranked second in the country in 3-point percentage with an astounding .477 clip and was named to the All-Big Ten first team.

Scheid said she’s been back to Welsh-Ryan Arena for open gyms, but not yet for a game. Coming back while in her new role at Loyola feels like “two worlds colliding,” she added.

“It’s going to be super fun, but my job has changed now,” Scheid said. “I’m not able to lace up again. I wish I was, but I’m very excited to come back and have the opportunity to have a team play at Northwestern again.”

Scheid joined Loyola in November 2020 as a volunteer assistant tackling everything from watching film to spending time on the court with the players. She’s since transitioned to director of women’s basketball operations, a role she described as handling most of the “behind-the-scenes” aspects of college basketball like logistics, travel, food and gear.

As a former student-athlete, Scheid said she understands what players want out of her and what she can do to improve their experiences. Her learning and organizational change degree gave her the foundation for working with “people of all different backgrounds and experiences” and has paved the way for success in her new role, she said.

While playing for the Cats, she overlapped with several of the program’s current stars, including senior guard Veronica Burton. According to Burton, she and her teammates still see Scheid frequently, but she’s looking forward to being around her in a game environment again.

“It’ll be fun to see her on the other side of things, see her in her element as a coach now,” Burton said. “She knows some of our plays, still. Hopefully, they don’t know too much about it.”

Senior forward Courtney Shaw agreed with the sentiment, saying NU always enjoys competing against alumni and that it’s “the best when they come back.”

Scheid said she’s looking forward to seeing former teammates like Burton, Shaw and senior guard Sydney Wood take the court Wednesday, as well as getting to watch the team’s newer players. She said seeing Burton, Shaw and Wood become leaders for their younger teammates has been a “cool thing” to witness.

McKeown is looking forward to having Scheid back in Welsh-Ryan Arena, he said, calling her one of NU’s fixtures. He expressed disappointment that Scheid was not drafted by the WNBA despite her strong collegiate tenure, adding that anyone with similar statistics in the men’s game would have been a first-round draft pick. He said he’d love to see her play again, but he is proud of her role at Loyola.

“She was an incredible part of who we are on and off the court,” McKeown said. “(I’m) really happy for her now.”

— Women’s Basketball: How the ‘Backcourt Burglar’ created a name for herself to become the face of Northwestern women’s basketball