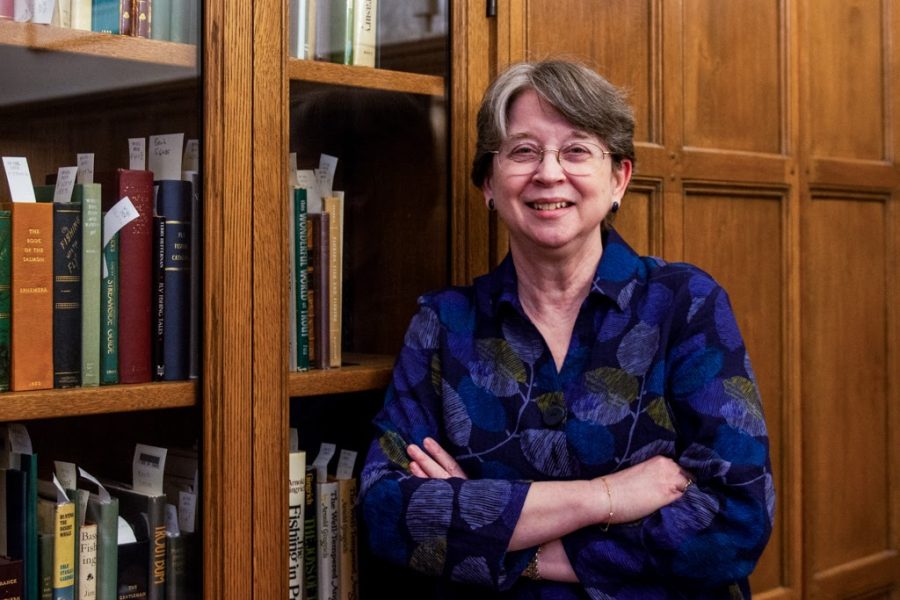 Sarah Pritchard celebrates 15 years working at Northwestern as the Dean of Libraries. She recently announced her upcoming retirement, which will be in August, 2022.

After 15 years at the University, Sarah Pritchard, Northwestern’s Dean of Libraries and Charles Deering McCormick University Librarian, announced she will retire in 2022.

Pritchard’s first job was at the Library of Congress. She said many people questioned why she would leave such a prestigious position. However, Pritchard said she saw herself as an academic librarian and has conducted meaningful work in university libraries. In addition to NU, Pritchard has worked at the University of California-Santa Barbara and Smith College.

“I have had a truly amazing experience here at Northwestern and it has been the highlight of my 45 years working in research and academic libraries,” Pritchard said. “Being at Northwestern has been, in many ways, the pinnacle of academic and research librarianship.”

Once she officially retires, Pritchard said she looks forward to delving into the stacks of books she has not had time to read. She will stay in Evanston, where she hopes to continue various nonprofessional NU-related activities.

During the last 15 years, Pritchard oversaw the library’s strategic planning, which includes managing resource development, targeting outreach and partnerships on campus and across other University libraries, and allocating funding.

The libraries raised $78 million to support library advancements as part of NU’s “We Will” fundraising campaign under her leadership, Pritchard said.

“I think one of Sarah’s biggest impacts has been her support for the professional development of librarians and library staff,” said D.J. Hoek, an associate University librarian for research and engagement. “That has included increased funding for travel, training, research time and affiliation with other campus schools, institutes and centers.”

Pritchard said her biggest impact on the University community has been overseeing the expansion and evolution of the libraries. As a result of Pritchard’s initiatives, the libraries were one of the first places on campus to have gender neutral bathrooms.

Additionally, a large number of library staff went through the Change Makers program, a dialogue-based series run by the Women’s Center that aims to create a more collaborative and inclusive community.

Pritchard also led the creation of a new strategic plan explicitly focusing on equity, diversity and inclusion, not only in staff hiring but also in collections, services and spaces.

The libraries partnered with the NU Black Alumni Association and the provost’s office to take on major responsibility for archiving the history of NUBAA and expanding the library’s work to archive the Black experience. Pritchard also created the first position at NU libraries for Asian Studies. The library has since expanded its holdings and upgraded the physical location for Asian Studies materials.

University Archivist Kevin Leonard has worked with Pritchard closely, and said her outreach has paid off. He said the University’s support for acquiring collections and building improvements for new facilities have created opportunities for staff.

“Her work has allowed archives to acquire collections in much more volume, and I like to believe, some very significant collections during her time in office,” Leonard said. “She has been really supportive of me and my unit.”

— Dean of Libraries Sarah Pritchard to retire in 2022